Work today was stressful, more stressful than anything else. Usually, this job eats at my soul and makes me want to quit, but I can't I'm not just working for myself.

"Sweetie I am home, and I got dinner tonight your going to make it so get ready" I yelled throughout the house.

"Oh...I didn't think id be seeing you today my friend" I said quietly.

There he was...Death...the last thing you're supposed to see before you go where you go. He stood tall, almost proud of his name, he was dressed in an all-black suit that seemed to fit him and only him. His red time was a dark bloody red. It was so red that it didn't fit the suit...at times I find myself losing focus starting at it...

"Why is that?" death replied.

"Keep your voice down I don't want her hearing you!" I said angrily "Believe it or not I don't want people thinking I'm crazy!"

"You would know all about that. Plus I learned something new that I think you might find cool" He said with a deep voice that demanded my attention.

Suddenly he picks up an apple from the bowl of fruit on the table. It began to rot as he gripped it. Quickly and without question he let it go, but the apple did not fall instead it floated there in the air. Death then pointed at the clock on the wall.

Excited I ran over to him and the apple "Woah that is absolutely fucking awesome! how did you do it?" I said loudly.

"No clue...I was just able to do it suddenly. Sometimes I can make it last for hours or even days. Other times its seconds." He said looking away from the apple.

"Then why are you here...Death," I said fearfully as I started to dought that he was here so a friendly visit. I mean it is his job to get people to the other side...We had our moments a few times where he has tried to get to do something unthinkable, but ever since I got custody of my baby sister he has stopped, maybe this was another attempt. "Work wasn't that bad, I'm not...susicadal or anything," I said. The tremble in my voice was noticeable by even myself so there was no question that he heard it. Suddenly the apple had fallen to the ground.

"Calm down...I'm not here to take you, but you are right I'm here for business," he said emotionless.

Suddenly a loud bang happened. As if someone had fallen, but there were only two people in the house me and...

"NO! You can have her" I scared in anger and fear. I then rushed to my sister's room. The door had been locked. "Hey open the door honey please" I begged, but nothing there was silence...I asked again and again and again, but there was nothing.. not a single sound.

"Well don't just stand there screaming at the door get in there!" He screamed at me

I kicked the door down to find her lying there motionless there was blood on the floor next to puddle a letter opener.

"No no no" I cried rushing over to her. Please don't go, please.

Death walked him now with his scythe in hand. "I'm sorry" bu the voice wasn't his... 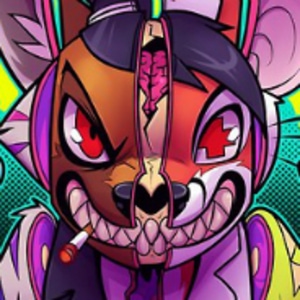 A short story of a man descent into madness as death, comes to take his baby sister. 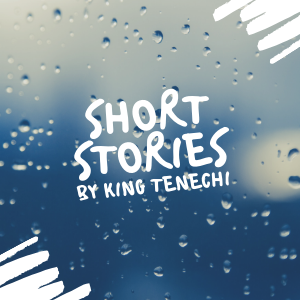 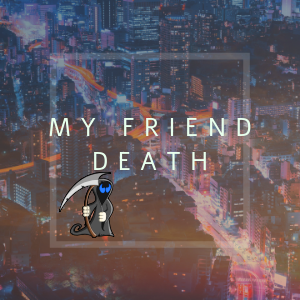