Hole's In The Wall

This girl will be the death of me. If I could die that is. I'm partnered with the most insufferable person in the clouds realm. You'd think that if your job was to kill people you'd be conflicted and sad. However my death seems to be the rainbows a unicorn vomited up. 'Why couldn't I get a normal death?' I huff as I sit down on my cloud staring down at the world watching people play and sing. 'This world is beautiful and fill of life.'

" LIFE!!!!" 'why did death have to screw it up...' she runs up to me, her tiny body and pigtails might be cute to some but I find it sickly. Her small red dress is poofed up almost defying gravity and her grey skin shines like a polished skeleton.

" When are you gonna let me do my job?" She huffs head butting into my arm.

" Never, I've told you before this is my world not yours" You're probably confused. My last death,

He was crazy, he killed everything on sight! He destroyed my perfect world. So after he was gone, for a little while everything was perfect. Nobody died, flowers bloomed birds sung but now all I hear is mini deaths horrible screeching as she whines over not being aloud to murder people. I've learnt from my mistakes. Deaths are too reckless.

My world only needs me.

That's the way it's going to be. Mini death can't stop me, since no one on my planet has died death she has no power, everyone is alive and I'm far stronger than her. It's how our powers work.

"LIIIFFFEEEE" she whines shaking my arm.

" Will you stop? child," I narrow my eyes at her. She huffs and turns away from me.

" Fates not gonna be happy when the planet is overpopulated!" She yells, these a hiss in her voice. Almost as if that was supposed to be a threat, I could crush her where she stands...

I decide to not talk in fear of losing my anger.

"LIFE DON'T BE A BUTT!" She snarls waving her arms in the air.

After a few days I found she'd just give up on talking to me. She'd occasionally grab my arm or slap me but that be her most amounts of effort. After a year she was just silent. Sitting on her cloud. Ah it's so perfect! I can finally hear the birds chirp. i noticed she had been crying but I didn't care! She wasn't getting what she wanted. She doesn't deserve it! She's a child. You should never give a child the power to kill...

" Say something... it's so silent..." She mutters staring at her feet. " They're so silent..." She looks down at the world " I've been watching these people down here, Life... their father is sick... he's old... coughing up blood. Suffering in silence... You refuse to let him die..." She stands and walks over to me. " You know... for a while... I used to think killing people was bad... I was sad that it was my job... I didn't want to hurt people... but then I realised... people need death... people need me... or else they will be in pain forever...." She looks up at me. I've never see her eyes so dull and cloudy. It almost scares me but I glare down at her nonetheless. " You'r torturing these people life. You'r hurting them more than I ever could. I love these people! I'm going to help them. Even if that means hurting you in the process." She swings her synth into the ground. The cloud beneath us hardens and cracks under her weapon. Where did this power come from? Her eyes fade to black as she lifts up her synth once more. I can't let her do this! I pounce on her holding my staff against her neck, I watch her skeleton neck begin to crack under the sure power and pressure I inflicted. But soon I hear... sobbing...

I snap my head back to the planet. I run over and stare down at the world. I hear mini death slowly stand. " Do you get it now life? Did I get your head out of the clouds?" she asks as she walks past me and steps onto my planet. I follow her as she watches the people gather around their now departed loved one. Their father is dead...

" No... I won't let you ruin this! I won't let you destroy my perfect world" I smack her upside the head with my staff, she lands on the ground hard. As her hands touch the grass it slowly turns black. She infecting it! I go to swing at her again but she dodges it and runs. Soon I can't see her I'm vision is blocked by humans. They hug and comfort each other. Horrible! Look at the pain she has caused.
Dead grass, it creates a path. She's getting away! I push though the people and run along the path. Soon I see it. A young girl, with a giant gash going through her torso. There's death... standing above her.

" I can take it away" Death whispers, the little girl looks up at her.

" Not quite..." Death smiles softly. " I can take away your pain... I can bring you to a beautiful place"

" I want to go there" The girl mutters. Slow death places her hand on the girls forehead.

Pain... I feel it. It stings though my chest and cut me. Is this what it's like. To suffer.

Death sliced through me with her scythe. It hurts...

I wake up back in the clouds realm. Mini death is splashing water in my face.

" Wait you thought I killed you?!" She yells grabbing my face.

"Dude I had the tiniest amount of power ever, I barely scratched you! I'm surprised you got knocked out! Ya big baby!" She teases.

" I've never been hurt before" I mutter looking down at the tiny scratch on my chest.

"Never" Death suddenly plops down before me and sits staring at me. I can't bare to look at her. "This was what they felt. Except a million times worst." I mutter, Death tilts her head with a slight frown. " I wanted so badly to have perfect world. But all I made was a painful one" I feel tears for in my eyes as I stare at the tiny splotches of blood on my robes. My own blood is unsettling to the eye... " You must hate me" I sigh finally meeting eyes with mini Death. I watch as a faint smile crosses her little face.

" I never hated you Life! I just, I wanted to help... It infuriated me that you couldn't see what I saw" She looks down at her knees " I kinda lost it actually, I broke part of the cloud realm." I peer over her shoulder to see the blackened clouds that rain over the world.

" The would could use a little lightning" I smile softly at her, I watch as her face brightens.

" Are you gonna let me do my job now?" She asks shaking my shoulders.

"Yay!" Her arms wrapped around me as she pulls me in close. It has been a long time since I was hugged... It's nice...

This girl will be the death of me. If I could die that is. She's annoying, loud, hyper and not to mention alarmingly creative. One year ago I wouldn't let her do her job, I denied the people on earth the right to die and hence. I made a world filled with suffering. Death knocked my head out of the clouds and made me realise the damage I was making. She was brave, smart and wasn't afraid to stand up to me. Now everything is perfect.

" Yes" I ask as she runs up to me, her little pigtails bounce around as she waves her arms in terror. She quickly grabs me by the torso and hides behind me. " What's wrong?" Suddenly I meet eyes with them... Fate... " Oh sh** " 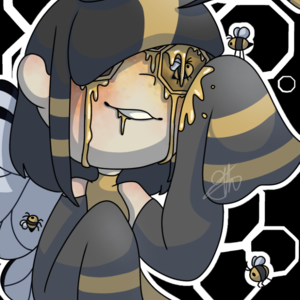 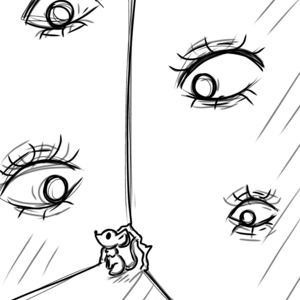 Hole's In The Wall

This is a book filled with short stories that I have written over my many years of being alive.
The name: Holes In The Wall, is supposed to be a nod to mouse dens and peeping though the hole to see a whole other world.
The stories may be developed into comics!
So why not see whats behind the wall and peep through the mouse hole!
Subscribe 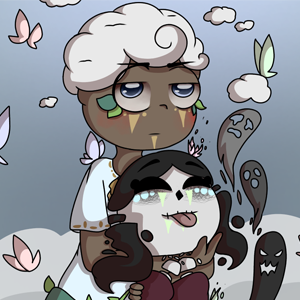