That Time When My Crazy Love Bringed JOKER

My Name is Priscilla von Stein and I am the daughter of the Von Stein family, and those family are the righthand of the Crown helm Empire. In order of the traditions to stay unchanged in the empire, I am considered as the daughter of the duchess. I suppose I'm one of the filters that will make the crown prince Edward choose and marry to be the empress or the queen, and I've truly been in love with the crown prince Edward that I've tried my best to attract his attention, but it never worked, and he always looks at me in a judgmental way. He was always surrounded by duchess, especially this lady who’s known as Luna Ritchie, who loved the crown prince in a way that always looked like a hungry lion who didn't want other animals to touch his meat, and the crown prince used to like her so much.

One day, I was walking outside the castle during the party, I saw a strange book with an unusual cover in the floor of the garden …I pick up that book and took it with me home, it was a strange story about a man who called himself the Joker. His real name was unknown, the story of the joker was sad since he was raised in a small apartment with his single mother when he was 7 years old. His mother’s ex-lover killed her in front of him, her ex was a mafia boss so at that time - the joker instead of crying he was laughing when his mother died. He didn’t know how to express his emotions, therefore; he would laugh instead of cry to show his sadness. When the mafia and his mothers’ ex-lover saw him laughing, they hit him strongly and threatened him with guns, but he survived. Due to the bad environment he grew up in,

he started killing when he was 12 years old, the Joker would kill with a smile or laughter in his face. However, he was only killing the bad people who deserved to be killed, and he used to be good to the weak people and kind with animals. but since he was killing the people, they have considered him as dangerous and they did not care about his good will. When he arrived at age 30, he became a professional killer. He would kill people from all around the world with laughter in his face, but on the inside, he was suffering. The Joker never felt happy because he was very misunderstood, no one understands what he has been through all his life. One day, he saw a pregnant woman and three guys were trying to rape her; he killed them and saved her life. The woman instead of thanking him, she pretended she needed his help to take her to the hospital and while he was doing that she stabbed him with a knife that the Joker used to kill the three bad guys. She then called the police to catch him and execute him.

After I read that novel, my eyes were full of tears and my heart was hurting as I was living the joker’s life in my mind, how can such an author come up with such story.

It has been more than three weeks and every time I remember the story; I cry and feel sorry for the Joker. What a sad life he got; how unfair can the world be! I know it is just a novel but, why I can’t feel happy after reading it? More days passed and I went to an event of the crown prince as usual, to choose his future wife but this time when I went to the party; my face was pale and people all around me were gossiping about how miserable I looked !

I could not handle the pain I was going through, so I went outside to the same garden where I found the book. I thought I could find a way to cheer myself up, but the odd thing is I found the same book in the floor. I wonder who brought it here, I knew it is the same book which was with me since I left some marks, I looked around and nobody was there. So, I walked more, and I saw something strange, which I've never seen before. I come here several times, but nothing was here but how?! However, I have decided at that time to throw the novel in the well and say Goodbye to my beloved joker. Since it was just a novel, and I could not do anything for him. Nevertheless, it is known if u throw a coin in a well your wishes become true. However, I threw the book in the well and wish to forget the joker forever, and the book. Or maybe a miracle can happen where I can change the Joker's fate. After I threw the book, my heart was full of sadness. Then out of nowhere, a silhouette behind me appeared which scared me a lot. Light started to enter when the door opened, my eyes opened wide when I saw who entered, it was THE JOKER! 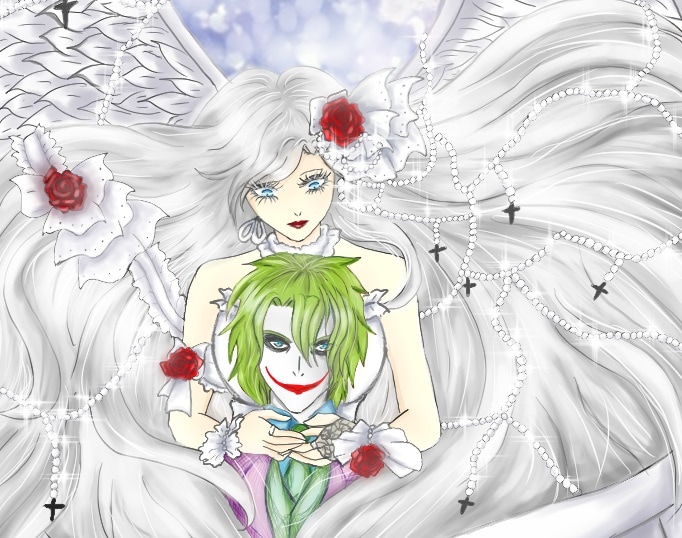 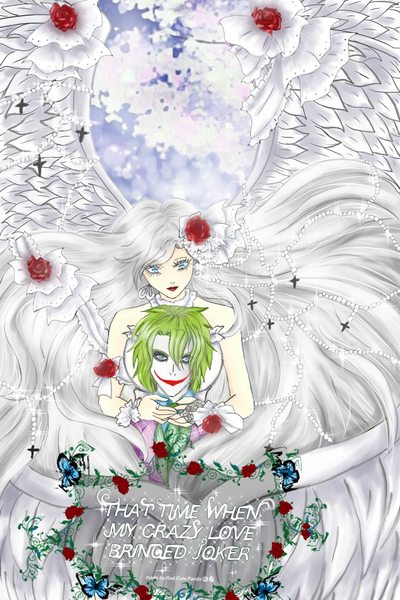 That Time When My Crazy Love Bringed JOKER

Crazy Time travel love between two different persons, from different worlds, Priscilla the duchess from the old century time, from other world who fail in love with joker from the modern time of other word too, Priscilla move to the modern time by magical book she found in the castle garden by reading the page every page she read she live I every single word she read of the book the book was novel about the joker so that how she met her true life love
Subscribe 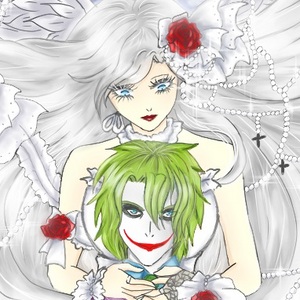