Sybils lips parted just barely, her fingers twitching to reach out towards that clenched fist. Her skeletal fingers trembled against the enormous effort. How much strength does it take to give the slightest comfort to her sister?

She admitted defeat as Ira’s hand suddenly lifted, punching up towards the ceiling. Her eyes brightened with surprise and her lips curled upwards in pride, “He’s not losing! Not yet!”

Sybil blinked, her face still towards Ira as she shifted her attention back to the skirmish on the monitors. A peculiar and unfamiliar sense of shock from Sybil accompanied Ira’s reverie. The thin, beaten, bloodied boy, Tristan, had dodged a bone spined fist coming towards him, rolling underneath it forward. The monitors flickered with that roll, and one of her drones beeped in alarm at a sizzling spark erupting next to it.

Was her lair malfunctioning?

That was not impossible, but quite improbable.

Could it be from…?

Before Sybil could analyze further, an enormous shadow loomed over them. Sybil’s head turned just a sliver, acknowledging the warm, nervous energy of the oversize teddy bear known as Orsin. However, she remained silent; from the data her machines gave her, Orsin was a shaken cocktail of fear and dismay.

Orsin looked down towards Ira, sweat down his cheek, his thick lips in a grimace, “How lon-long-long…” He paused, breathing deeply to gather courage into his belly, “Are you going to-to let Er-Eric keep hurting Tristan?”

Ira did not answer, her eyes sparkling, watching Tristan shove one of those exposed bones up into Eric’s grossly swollen arm, pushing the hulk back using speed, surprise, and strength that surpassed ‘ArchAngel’, “I knew it. I knew it was there. This was worth it. All of this, all that he went through was worth it!”

“Sis!” Orsin’s caramel eyes watered. He closed them tightly, shaking his head to fight away the helpless tears, “You can’t keep do-doing this to him!” A lump filled his throat, but he swallowed it, taking that ball of courage and clasping it within, “He’s going to d-d-die!”

Ira eyes flared towards him, and he could feel the weight clamping down on his stout shoulder. The collar of his shirt soaked up the sweat. Satisfied with his temporary silence, she returned her attention to the screen, “No! Fuck! No!” She ground her teeth, watching the abomination lunge at Tristan’s legs with surprise agility, jamming his exposed elbow join upwards, into Tristan’s side. She slammed her fist against one screen as he collapsed from the flow. Her erupting left a web of cracks and a sizzle of sparks erupting from the impact.

The remaining screens flickered before returning to focus, continuing the battle as it twisted again, and Eric, literally, was back on top, pinning the small man under him and biting down hard onto his purple and blue painted shoulder. Orsin looked away, not wanting to watch Tristan’s silent scream. The shock had broken Ira’s pressure on him and his eyes narrowed, his brow angled deeply, his nostrils flared, “... all that happened to him, did you think Eric would-wouldn’t fight?! Are you going to let him KILL Tristan?”

Blood-red eyes honed on him and his sister’s face darkened, her teeth bared as her expression contorted into a demonic visage, “I MADE A PROMISE! I WON’T LET HIM DIE!”

“THEN WHY ARE YOU JUST WATCHING?!”

Ira stared back at her younger brother, the bottoms of her eyes twitching as she saw nothing but red. All of her guilt, her doubt coalesced into a laser point of rage. She aimed it at Orsin, whose defiance infuriated her, “Shut the FUCK up, Ori!” Her voice came out in a roar. A roar which normally would make the much larger man crumple to the ground, his head slamming down onto it, suffocating under its heat.

Yet that erupting did not come. A POP stifled it and crackle from the collage of monitors. Each LED screen flickered, the image of the cell and Tristan’s imminent defeat wavering before going black. Bars of yellow, cyan, and magenta replaced the blackness, before the screens sizzle and the bars melted into a bubbling mass of white.

Sybil eyes widened slightly; this was a most unexpected event. She leaned back in her chair, focused more on the screens than her previously bickering family, “… Strange…”

As she pondered the ruined remains of her screens, Orsin jerked his head to the monitors, shock and dread replacing his anger, “What… what was that?” He turned back towards Ira, only to see her back, “Sis!” He rushed after her, stopping at the door that she nearly swung off its hinges, “Please hurry!”

Ira was doing just that, the thunderous sound of drums pounding against her eardrums. Her left shoulder ached as she quickened her pace, boots slamming onto the ground as she headed for the doors she had foolishly closed.

That name repeated itself in rhythm with the punishing drums, consuming her thoughts.

I made a promise. I meant it. I wouldn’t let anyone hurt you.

When she saw the gate, she marched towards it, ignoring the guards and grabbing onto the bars with her right hand. She scrunched the bars to the side, the metal bending, stone breaking as she bent them into mere rubble. The guards froze in shock and a growl from her throat prevented them from taking any action. They were as still as statues while she stepped through the folded remains of the cell gates. Alarms blared from the destruction.

She paid no heed.

The destroyed entrance, the cracks on the wall, and now the splintered floor did not matter.

None of that was important.

The only thing that mattered was behind those steel double doors.

Sweat dripped down her forehead, her lips quivering. Her eyes were stinging and growing foggy, her hands trembling as she pressed them against the metal blocking her path. She closed her eyes tightly, the drums louder than the alarm. Her left shoulder shook, pain shooting up from the joint, lighting the fire along her neck.

She held her breath then pushed forward, the doors squealing, then screaming as the mechanism holding them closed, broke apart underneath her strength. The bottom hinges of the door scratched along the floor, leaving deep welts into the cement.

She stood up, releasing a gasping breath, her face salty and wet.

Her vision was failing her; the sight before her was blurry.

All she could focus on was a still figure standing in the darkness.

Orsin and Ira get into a heated tiff, with Orsin rightfully pointing out the insanity of what Ira is doing. Before Ira can put him in his place, an unusually event occurs, shocking all three witnesses to what was becoming a bloodbath.

Ira is charging in to find out what happened and to make sure that the man she loves is still alive. 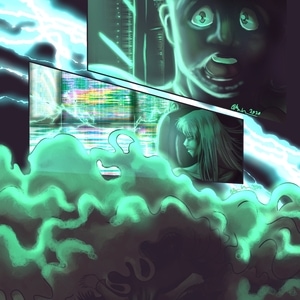