He needed to think about what was wrong with him.

He grimaced, staring at the dried rust and milky mixture coating his hand, filling in the lines of his palm.

There was something severely wrong with him.

He grunted softly, tossing the stuffed cotton quilt to the side. His feet touched the fur rug, and he sighed as his left ankle only gave him the barest of dull throbs. It felt more like a residual pain; a memory that his nerves did not let go of.

He leaned forward, pressing the side of his palms against his forehead as his elbows rested on his knees. He had an hour to himself in his room.

He chuckled bitterly, reminding himself that it wasn’t a room.

It didn’t matter that the past few weeks he had been having the best sleep in his entire life. That he had a window giving him a view into the most exotically manicured garden he had ever seen. That his feet were kept warm against the plush rug and a large ash wood wardrobe was placed near his bed, filled with clothes that matched his measurements to perfection. It didn’t matter that several bookshelves were recently installed while he was futilely trying to smack around the bitch who really deserved it.

It did not matter that those shelves were filled with his favorite type of books. He couldn’t ignore the tantalizing covers and after days of being tested on, or being thrown around the museum of death, he was thankful for the escape-

Not thankful. Definitely not thankful for the mental relaxation the books gifted him.

This was not a bedroom filled with above-normal creature comforts.

This was a cell.

He sniffed and then coughed, his head jerking away. “Ugh. This place reeks.”

That wasn’t true. The room, as usual, smelled fresh.

He stunk of himself, as a teenager again.

What the fuck was wrong with him?!

He walked to the vanity, turning on the faucet to a scalding temperature and washed his hands, before splashing the near boiling water in his face. The pain not only gave him a sweet stinging sensation of dizzying bliss, but it also brought some clarity.

There was only one answer to what was wrong with him.

All signs pointed to one person.

He glanced up to the empty spot that held a mirror. The first time the mirror was replaced, he ended up punching it, glass burrowing into his knuckles. Before he could use that same shard coated hand to jack off, goons came in and forced him away, dragging him to another session with that Mad Scientist and his bunch of Igors.

When the mirror was replaced a second time, he waited for the BITCH to come in and threw it at her. It was another test, one that he expected her to fail. Instead, she sidestepped it, allowing it to hit the wall in a cacophony of splinters. She didn’t say a word, but he could see the hell in her eyes, aching to unleash itself on his flesh.

His cock twitched at that look and he smirked, aching for her to devolve back into the monster they both knew she was inside.

Stubbornly, she refused, motioning her guards to escort him out of the room. When he returned, the mirror and Ira were gone.

The mirror was never replaced after that. Leaving him staring at a blank, empty wall.

He was happy it wasn’t there.

He didn’t want to stare at his fucked up face. He hissed as his hands went into the burning water, seeing his skin turn pink, then red. When it bubbled and blister and he felt enough pain for his toes to tingle, he pumped a few dollops of some fancy French lemon soap into his hands.

He leaned his head against the side of the alcove, his body hot as the pain of his burnt hands traveled through his nervous system, sending sparks into his brain that released so much pleasure. He shuddered, his eyes closed as he thought back to his dreams. The dreams that would jolt him awake, cold sweat coating his body and a fresh white stain on the sheets.

Grabbing his arms, dragging him down further.

Fingers digging in and tearing.

The abyss was vast and bottomless,

Yet he was suffocating.

Choking and swallowing the darkness that filled him.

The darkness that embraced him possessively

A darkness that needed him more than anyone need him before…

He bit his bottom lip, eyes watering behind shut lids. He could feel her, behind him and pressing close against him. Her left arm, metal and heat, would grip his neck, forcing him to stop his desperate strokes. Her right arm would run against his thigh, nails leaving long thin strips of red against his pale skin before it his pelvis. That soft hand, tipped with red claws, would dip down between his thighs and replace his hand.

He moaned, his lips parting, remembering the taste of that beastly prosthetic finger forcing open his mouth and fondling his slobbering tongue. Drool dripped down his chin and onto the sink as he imagined sucking on that horrible limb, feeling the vibrations of her feral chuckle running down his spine. His eyes fluttered before rolling back, his toes arching on their tips as he almost, just almost, felt her teeth digging into his shoulder, tearing into it as her steel fingers tugged, pulled, tore his tongue from his mouth.

He was suffocating in blood.

Nails ripping into his stomach

The flesh peeled off as easily as an orange.

His iron tasting juices would fill the abyss

As his entrails tumbled into the void.

Thousands of mouths, ravenous and sharp

Feasted upon all he had.

His pounding heart exposed to the mouths

Aching for the sweetest meat exposed to him

The arms and mouths holding him tugged back

Forcing him to arch,

Popping joints out of sockets,

Millimeters from his heart,

The pounding was deafening.

The pulse of his terrified heart all he could hear

The collar that pierced his neck.

He could feel it, his balls tightening as the hell in his mind raged and fed him horrid, glorious images that felt real. It would hurt and yet being ripped apart sounded like…like heaven. He was just at the edge, aching for a taste of complete, excruciating bliss.

The bliss he hadn’t felt since she made that promise.

“I won’t hurt you. Not anymore.

I love you…You don’t believe me but…

His eyes opened wide, and tears fell, a sob clawing out of his throat.

No one needed him as much as she did.

His hands jerked away from his length and he stumbled back, falling onto the fur rug. Though his balls ached and his penis screamed at him for release, his traitorous body and tumultuous mind stormed within him and he could-

“Say something. Do something. Anything!” He punched the rug; his knuckles bruised and joints cracked out of place, but he did not care. “Hurt me! Fuck me! Beat me! Get angry!”

“Ira…what the fuck do you want from me?!” What was the point of being imprisoned in this gilded cage if she would not torture him, hurt him, experiment on him, or even touch him? All the books, the food, the comfortable sheets that were cleaned every day felt cold and empty. “Just…stop…ignoring me…”

Check out a tale of romance, action, and a bunch of magical peeps trying to figure out how to be stable in a post-apocalyptic setting!

Link in the description!

Ohhh there is so much to unpack here. So many things that is absolutely fucking Tristan up in ways he definitely does not like. If any of you had guessed that Tristan has his own psychosis, well here is proof.

He had been so close to being fixed. Then he met the absolutely WRONG person...Poor thing.

Will he ever get better?

I think we know the answer to that...

You'll be the Death of Me: https://tapas.io/series/deathofme/info

***
Thank you for being so awesome and reading my series! If you enjoy my stories, please let me know and check out my stuff on Twitter and/or Instagram CodeMonkeyArts or visit my blog at codemonkeyarts.com!

For early access to Chapters and various other naughties, considering supporting me via patreon!

Oh man, Tristan's broken now. :(
It's interesting that in the end, it was Ira's distancing from him that caused him to break. XD 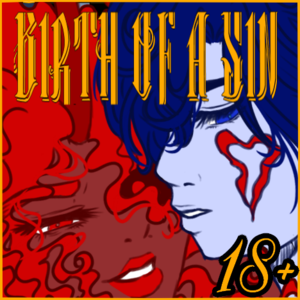