Life in West Catoig may not have started so well, but things had been looking up since Ayen moved into East Wood. Most of the folk there were elven, though none of them seemed to recognize him. They were all born and raised in the city away from the elven kingdom. They were humble folk and hard workers. No one seemed to mind that Ayen was a bit of the unsavory sort. No one called him a thief or a scoundrel. In fact, Ayen was starting to get the impression that people thought a little too highly of him. Especially now.

"Absolutely not. I'm no hero." Ayen stared down at the two dirt smudged faces before him.

"Please, sir. You're the only one in the district who can help." The woman clasped her hands together, pleading.

He rolled his eyes and crossed his arms over his chest. He had no intention of getting involved in anyone else’s problems. He had his own issues to sort out. "Isn't that what the city guard is for?"

"Have you ever seen the city guard in East Wood?"

"They arrested Malya Helmsford not two days ago," Ayen said, very sure of himself. Why wouldn’t these poor fools wouldn't just leave him alone? Couldn’t they see this wasn’t his expertise?

"Aye, they arrested her. For tax evasion. They don't come here for nothing else. Don't play dumb with us!" the dwarf pointed a finger at him.

Ayen sighed. They weren't wrong. He ran a hand through his hair. Why him?

"Yes, sir we will. Ten gold crowns if you bring it all back," they said with a confident grin.

"Well, why didn't you say that in the first place?" Ten crowns would pay his rent for three months. He could save his earnings. Buy himself a real bed instead of the pile of rags he'd been sleeping on.

The pair shared a look. "We kinda assumed that part was obvious," Dag said.

"Do you want the job or not?" asked Allya.

Ayen sighed. "Can you tell me anything else? Who stole the crates and where did they go?"

"If we knew that then we wouldn't need you, would we?" the dwarf scoffed. "And Liluth said you were smart."

"Fine." Ayen rolled his eyes. "I'll see if I can find anything around your shop."

"They would have had to take the crates out through the back. Nothing was broken so they probably picked the lock," the elf said.

"I'll start there then."

Ayen wasn't exactly a detective, but as a criminal who knew how to cover his tracks, he knew where to find any evidence that could have been left behind. He walked around the shop, looking for tracks. There were ruts in the dirt from a cart and the couple had mentioned that a cart was stolen, but he couldn't tell which tracks would have belonged to the thief. Next there was the door. The lock had definitely been picked, that much was easy to tell. Inside, there were no footprints, nothing was knocked over, nothing broken. It was as if a ghost had swept in and carried off the crate. Whoever it was knew exactly what they were doing.

Ayen stopped and he looked around the room again. No, it couldn't be. He had to have missed something. He circled the room and found not a hair out of place. He only knew one thief in West Catoig who was so clean. The same thief who was impossible to catch.

He went back outside and faced the sun. Even the warmth brought him no comfort. His feet shuffled in the dirt as he made his way along to the nearest tavern.

The tavern in East Wood wasn't as big or fancy as the bar he'd found on the market street. What it lacked in size, it made up for in housing every last criminal in the city. Except for one, of course. The smart one. The one who knew that the first place to look for a criminal was the one place sure to be full of them. Still, he asked around.

Most of what he heard was rumor. None of it sounded very likely. They said Waylon was in bed with a noble woman with an abusive spouse. They said Waylon lived underground in the root system of an ancient tree. Then they said Waylon had been seen leaping silently across rooftops and seemed to have visited a man called Kaleb Philmore. Kaleb Philmore was a collector of antique pottery. Especially that which was hand made by dwarves. Ayen hadn't been told what was in the crate, but dwarven pottery was a good guess.

He wound his way through back streets, navigating in the dark with his keen eyes. Mr. Philmore's house wasn't especially large or especially well guarded and it was fairly simple to climb up the garden trellis and into the second floor sitting room. Keeping his feet to the dusty carpets, Ayen snuck from room to room. Everywhere he looked there were antiques, old statues, suits of armor, art. The man would be called a collector by most, but Ayen called him a hoarder.

He found the crate, half open, in a room stuffed full of handmade pottery and old porcelain. Sure enough, there was dwarven pottery inside, complete with a dwarven mason's mark. He closed up the crate and carried it out. It was heavy and he had to be careful that he didn't jostle it around enough to break. Waylon would have had a far easier time and the thought made him huff.

Ayen carried the crate down the stairs, pausing every time they squeaked, but Mr. Philmore seemed to be fast asleep. He made it with the crate all the way back to the shop without anyone looking at him twice.

"Oh thank you, sir!" the elven woman cried. She clasped her hands together in joy while her partner looked over the crate.

"It's all here," they said. "And I'll be getting your payment for you."

"Actually, my friend," Ayen stopped them. "Not just yet. The one who stole it knows where to find it, you see."

"Ah," the dwarf nodded. "What's to stop them from taking it again?"

"Perhaps we should get a dog."

"Or perhaps you should spend tomorrow night elsewhere and leave the shop to me." The dwarf looked at him with distrust. He held his hands up in innocence. "Just for the night. I have a history with this thief. The least I can do is scare them off." Though if it went well, he would be turning the man in for that bounty. Then he'd have enough money to buy his own place in Greeley and no one would have to worry about him stealing their pottery.

"Yes, my dear friend. It would be my pleasure,” he said with a genuine smile. The opportunity was too good to pass up.

They made him a comfortable spot to rest when he came back the next day. Then the pair went to spend the night at a cousin's house down the street. Ayen laid on his cot, eyes closed, heart racing. Was the Angel as beautiful as he remembered or was it all a trick of the moonlight?

Keen ears picked up the sound of a click. Waylon had picked the lock once again. The door opened silently. His footsteps were barely there and surely imperceptible to human ears. He probably believed himself silent, but Ayen knew exactly where he was in the room. So he knew when Waylon had found him.

Ayen smiled, eyes still closed. "You shouldn't be here. I'm waiting for a burglar. He might be dangerous."

Ayen felt the air move and rolled from the cot. He heard metal strike the fabric. Knives drawn, he faced the thief and he was, in fact, just as beautiful as he remembered. Almost enough to throw him off, but not quite. When Waylon moved, he was ready, but neither of them was equipped with weapons good for combat. Waylon and Ayen both were not criminals who were interested in a fair fight. Not when a fair fight can end in a loss. Those who carry knives intend to stick them where they go without much hassle.

"I'll have you this time, handsome," Ayen grinned. "And when I do I'll be sitting awfully pretty in a mansion up in Greeley." He dived forward, attempting to disarm the man, but it was a near miss. Waylon dodged and swung his blade, nicking Ayen in the shoulder.

"Unfortunately, dear elf, I did not come here for you." It was Waylon who gained the upper hand and disarmed him first, yet he didn't strike the killing blow. Instead, he went for the crate.

Ayen stepped up behind him and took hold of his knife hand. "Did you think it would be that easy, angel?"

"I was hoping you would give up," he said and the sincerity of it gave him pause.

"I promised a friend I wouldn't let you steal from them."

"I have a reputation to uphold."

"I'm afraid I'll have to tarnish it."

They stood, seeming almost at an impasse. Waylon couldn't carry the crate out and defend himself and Ayen couldn't beat Waylon in a fight. Which left them standing, Ayen's hand gripping Waylon's wrist, the both of them staring into the other's eyes. He could feel his breath against his face and the warmth of his body where they nearly pressed together.

Then Waylon dropped his blade.

The clattering it made startled Ayen into letting go of Waylon's arm. The back of his hand brushed Ayen's lips as he turned away.

"Some other time," Waylon said. Then he turned and went out the way he came. Ayen cursed. Once again he’d been stunted by a racing pulse and frankly inconvenient desire.

Is it a little bit steamy in here or is it just me? What's going in Waylon's head?

It was a very pleasant reunion! 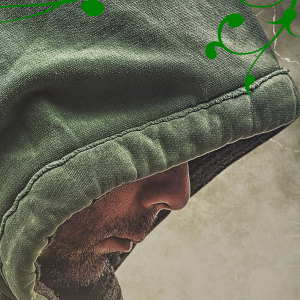