Cecile cried, clinging to a mirror.

Even Cecile found her reflection in the mirror to be a bit pretty, if she were to say so herself. White skin and red lips. Green eyes like the forests in summer and willowy limbs.

'I'll sell high, no doubt. I'm the one who's pretty, but how come the king benefits from it?’ Cecile felt irritable every time she looked in the mirror. Though, that did not mean she wanted to be ugly. The days passed by in such a manner until one day, the attendants of the main palace suddenly barged into her royal villa.

“Come right this instant? Ha, hang on! Let go, will you!”

The attendants told her the king had called and practically dragged her away with them.

“Why are you doing this!”

“You will know upon going. It is something good.”

‘As if. If it is something good, why can't you look me straight in the eyes?’ And just as she expected. Her father whom she was meeting for the first time ever, the king of Navitan, spouted nonsense immediately upon seeing her.

“Congratulations. Your marriage partner has been decided!”

“…First of all, pleasure to meet you, father,” Cecile politely greeted the king of Navitan, who was acting as friendly as if meeting a daughter he had talked with only just yesterday. She was seeing her father for the first time in 20 years since her birth, but she felt no joy, no affection, nor anything of the sort in the least.

'How is it that we don't resemble at all?'

Apart from their platinum hair and green eyes, her father bore not even the tiniest semblance to her. Perhaps her mother, whose face she had never seen before, happened to be an amazing beauty.

“You were speaking regarding my marriage partner?”

“That's right. My heart's been aching with worry that you've yet to marry despite being of age, but..."

"I beg your pardon?"

“It's nothing. Please continue.”

“Hem-hem. As I was saying. I was searching far and wide for your groom when I happened to receive a fantastical letter of marriage proposal."

Really, just who on earth sent the letter for the king to be making such a big deal out of it? Cecile waited for him to speak, thinking that she would not be surprised by whatever name popped out of his mouth.

“To my utter surprise, the letter was from...”

A scream burst out of Cecile's mouth upon hearing the name despite having braced her heart. ‘What? Emperor Estian?’

“Hahaha, you must be so happy to the point of screaming!”

“For you to be so thrilled to even stutter. What a relief. Now then, prepare to leave for the Empire at once and...”

"Are you nuts? Why don't you just kill me here and now instead!" Cecile shrieked, giving not a damn for whether he was king or not.

She had been prepared to be sold off as a wife to a suitable nobleman. But not this. Who was Emperor Estian? A man who was dubbed as the continent's greatest madman and a notorious tyrant.

As soon as he ascended the throne of emperor at the young age of sixteen, he personally lopped off the heads of countless relatives, sparing no one, be it those from the maternal or paternal side of the family. The charge they were convicted of was treason. The emperor hung the heads he cut at the entrance of the imperial palace as if exhibiting them, striking fear into the masses. One official bravely denounced him as having committed a grave transgression of moral law. The emperor, however, did not blink an eye as he captured the official and his family and saw to their end.

“You wouldn't have dared to speak as such had you tasted the poison I ate. So I had it prepared. First, I fed your first son the same poison.”

The official's face turned pale at his words.

“Why the face? It almost looks like you know what a painful poison it is.”

Meanwhile, his eldest son crazedly writhed on the ground, bleeding from every orifice in his body until he died. The emperor tossed a sword and a bottle of poison to the official's second son, and said:

“Make your choice. Kill your father and you will live. Fail to do so and you too will eat that poison.”

The official's second son took in the sight of his dead brother and immediately picked up the sword. And then, stabbed his trembling father. Run through by the sword of his son, the official crawled along the floor. The emperor gazed upon him and spoke in a low voice, indifferently.

“It appears he still breathes, so feed him the poison as well.”

“A fine ending to die knowing the potency of the poison he ordered, wouldn't you say.”

Only then did people come to realize that the crawling official was someone who had sought the emperor's life. From that moment on, the voices of dissent in the empire disappeared. After he succeeded the throne, the emperor began to wage war in a frenzied manner. As if all the nations of the world were the bane of his life. 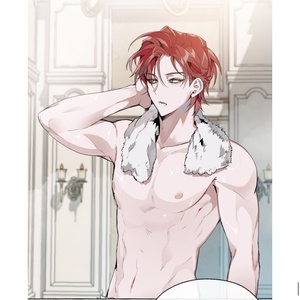 Well just from reading the history it's clear he has a tragic and difficult backstory and that's why he did that. To get revenge. But nooo, she will think he's evil and tyrannical and so will try to fight him and avoid him and in the end he'll show her the real him, or rather I should say, the him that's under the mask