'So this is where you were!'

If only she could, she would have taken him to show to the maidservants at the royal villa. Cecile stared blankly at the emperor for a moment more before she was soon struck by an important question. “Wait a second. Why are you on top of me?”

She was happy with him getting naked and all, but why was he doing so on top of her? He took a brief moment to think over her question before replying, “You want me on bottom? Is that how you like it?"

Cecile's mouth took the liberty to spit out her thoughts. “First of all, I think feeding aphrodisiac to somebody counts as one.”

The emperor's face turned rigid at her words. “Aphrodisiac?"

“Yes, aphrodisiac. Just how unconfident do you have to be, putting something like that here? Only scum use such things. They should all be put down."

Perhaps her heart was urging her to die tonight, seeing as how she had survived the day. Cecile continued to speak, even as she felt wonder at how daring she was being at that moment. “I did hear about such drugs existing, but goodness gracious I did not expect an emperor would resort to it.”

“Hold it. I believe there seems to be some misunderstanding.”

“You don't have to make excuses like that. I'm the only one who knows anyway. Oh right, the attendants who prepared it must know, too. Dear me... But still I must say, you are aware that intercourse without consent is a crime, yes? The same goes for aphrodisiacs.” Cecile gushed out her torrent of thoughts.

The emperor raised himself off her body at her barrage of words and walked over to the table. He glanced at the bottle Cecile had opened and asked her, “So you're saying you drank this and you think it's an aphrodisiac?”

“I do know that it's not alcohol. What sort of drink makes you weak in the body and knocks you out?"

Oh, I knew it. But just as Cecile was about to let loose another wave of curses inside…

“It's a truth serum, I'm telling you. A very clean one at that, too. Why were you drinking this? I was going to use it if things got troublesome.”

Cecile felt dumbfounded at the reveal. Why oh why would you put something like that here of all places?

“Truth serum... Were you going to use that on…”

“That wasn't my intention.” At that moment, the emperor's eyes narrowed. He shot a glance at the wall of the room before striding over to the bed and pounced on top of Cecile, as if pinning her down.

“What I must do tonight.” The emperor answered her question in an apathetic tone. He then turned her on her belly and roughly grasped her shoulders.

“Agh!” Cecile yelped at the sudden pain she felt in her shoulder muscles. She had spent a hectic time for several days, preparing for the wedding, and moreover her body had been stiff with tension the entire time she was on her way to the imperial palace. And due to sleeping with a bad posture when she was knocked out by the serum a while ago, her neck was duly aching. The emperor pressed his fingers against those knotted muscles, which led to a scream bursting out of Cecile. The emperor's hand moved again.

“Ahhh! Augh! S-stop!” Cecile continuously moaned at the merciless hands of the emperor. Before she knew it, she was under the bed covers. In the midst of darkness, Cecile twisted and turned in a struggle to avoid his hands, whimpering all the while. “N-no! Not there! Stop, stop it! Aghh!”

Intense sounds were made every time the emperor's hands moved. Cecile soon realized something was odd as the pain wrung a tear from her eye.

While it did hurt due to the emperor only targeting knotted areas of muscle, what came after the pain was an entirely new sense of liberation. And in no time, her previously sore neck was rolling around perfectly fine as well. After realizing this, Cecile ceased her struggles and entrusted herself to the emperor's touch.

“Augh! The-there…! Ahh…! A little, little more...!” Cecile moaned as she tossed and turned from the mixture of pain and euphoria, but then suddenly a certain thought flashed through her head. In a dark room. On the first night of marriage. Body curving beneath the bed sheets. Moaning.

'Hang on a second. Isn't this the perfect situation to give someone the wrong idea?'

It was at that moment... 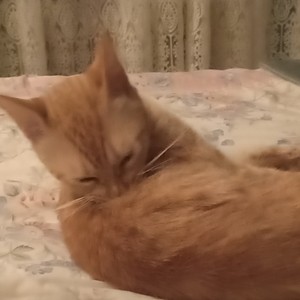