Sweat begins to build up in his palms as Matthew wraps the towel around his waist, takes the one draped over his shoulders and begins drying his hair. There was no time or privacy to take the notebook and stash it in his study before and he may not have those now, either. The maid will take him away for the tests as soon as he’s dressed and, then, it will be too late. He has to do something about it now.

Casting his gaze towards the black marble floor, he half turns towards the doll, hoping he looks innocent and sheepish enough.

“Could I be allowed to dress alone, please?” he asks in a low voice.

He doesn’t have to fake the blush that rises high on his cheeks. Dressing and undressing in front of the deathly still dolls has never been pleasant, has always been a vexing reminder that he’s little more than a prisoner, no matter how luxurious his cell and garments may be.

The maid stays where she is, her lips silent. It bothers him more when they don’t deign to answer him, as if his simple request is so out of line that it doesn’t even deserve to be acknowledged. Suddenly, he feels tired. Every minute of his life shouldn’t have to be a fight he can’t hope to win. He shouldn’t have to lie and pretend and throw away all that’s good and honest in him just to keep from despairing. None of them should have.

Matthew raises his face to look the doll in the eyes and, when he speaks again, his tone has turned cold.

“These boots don’t quite fit right. Fetch me the ones I usually wear. Hair pins and ties, as well.”

The maid turns with a flurry of her white skirts, heads towards the walk-in closet at the other side of the bedroom. Matthew grabs the clothes that were laid out for him, slips into the loose trousers as fast as he can, throws the robes over his head just as quickly. The corset and gloves, he leaves, for the moment. Instead, he dashes for the stool where his notebook lies hidden underneath a pool of cloth. He fumbles with the black lace and violet velvet layers, his heart racing, his mind screaming at him that he has no time left. He can hear the doll rummaging around in the closet, a distant, unnerving sound, like rats in the walls or birds’ feet on the roof. Once he stops hearing her, his time will be over.

Finally, his fingers graze something hard and he brushes the cloth away from it. The hidden pocket. He sticks his hand inside, grabs at the precious notebook.

The doll’s footsteps on the rug are almost completely silent but he can hear her moving towards the dressing table as if he’s tuned to her. Matthew follows up the chain connected to the pen with his fingers, unclips it and catches it before it can fall with a clank against the wooden stool.

The precious stash held against his chest, he casts his gaze around the bathroom, looking for any place he might hide his research. There aren’t many. Only the few cabinets containing toiletries and towels will do. He turns towards the closest one, finds it full of white linens, and breathes a sigh of relief. These will provide more coverage than the ones filled with dainty bottles and ornate pots.

As he’s trying to hide it between the mass of towels, the notebook slips from his hand, opens to the last page he marked as it falls. He catches it awkwardly, his fingers between the pages, the ones he was working on in the carriage.

Matthew tries not to read the words, he does, but once the symbols are in front of his eyes, it’s impossible not to. And, with his heart racing with the recent disgust of having the doll’s hands on him, the fear of being caught, the hopelessness of the tests to come, it’s impossible not to hear the counter phrase, ringing loudly in his mind.

Biting down hard on his lip to keep from letting out a gasp, he uncaps the pen and scribbles it down. It’s suddenly the most important thing in the world, more so than not being caught, that he writes it before he forgets the perfect sentence his brain just provided him with.

The symbols are almost intelligible due to how fast he’s noting down his thoughts, the weird angle he’s working at. He can only hope he can read them later, when he comes back to it, or that his psyche retains some of the brilliance it has just graced him with.

When he’s done, he sticks the notebook deep under the pile of towels. Then, as a last minute moment of inspiration hits, pulls one of them out from the top.

He’s closing the cabinet when he realizes he has stopped listening for the maid.

He turns his head instinctively and finds her standing at the door to the bathroom, the boots and hair accessories he requested in her hands. She gives him a strange look, not exactly suspicious, but as if a part of her is trying to decide whether he did something he should be punished for.

Matthew gathers the longest, back part of his hair into the towel he just pulled off, begins patting it dry as if nothing has happened. Yet the maid keeps staring at him and the silence begins to turn heavy and dense.

“The other one was already too wet,” he says as a way of explanation. “I had to get a new one.”

Matthew’s pulse quickens and he forces himself not to swallow hard, not to do anything that might give himself away. He walks away from the cabinet; staying near it would only make it seem as if he’s being overly protective of it. Once he’s closer to the maid, he drops the towel onto the stool with his dirty clothes, hiding the mess he’s made looking for the notebook.

He extends his hands towards the doll, gives her a small smile. “Thank you.”

The sudden words almost make him jump and Matthew curses himself for being unable to keep his hands from shaking slightly.

“What isn’t?” he asks, tilting his head to the side in fake curiosity.

“The towel,” the maid replies. “Please call me when you need anything, Lord Knight.”

He wants to take a deep breath, give his heart and his brain the air they’re so desperately clamoring for. But he can’t.

Ignoring his outstretched hands, the doll drops the boots at his feet, the hair pins and ties on the stool next to his gloves. Then, she picks up the clothes and towel he discarded, takes them out of the bathroom.

Matthew freezes. He can’t tell if he’s being paranoid, if he’s misinterpreting the maid’s casual behavior simply because he’s so anxious, but it feels as if her actions are measured, a warning. He can’t shake off the feeling that she knows he did something and is subtly letting him know about it, hinting at consequences to come.

A shiver runs down his spine, unstiffening his body, and Matthew picks up his gloves and hair accessories, sits on the stool before laying them in his lap. Slowly, he begins to braid the long brown tresses at the back of his head, all the way down to his waist. When he’s done tying it off, he pushes a few pins into the base, holding the shorter hair around it in place. The rest, he allows to stay loose, framing his face.

His task complete, he pulls on his boots, cinches the corsage over his robes and slips the gloves over his fingers. The whole process doesn’t take as long as he’d like and there’s nothing else he can do to stall, at this point. The maid is staring at him through the door, standing at attention near his casket. She’ll tell him it’s time to go if he doesn’t start moving himself.

Matthew resists the urge to look at the cabinet where his notebook lies, even though it seems to attract his eyes with the strength of a magnet. Instead, he readjusts his collar as he walks out of the bathroom, turns to stand in front of the door without waiting for the doll to say anything to him.

She doesn’t speak, either, simply comes forward and knocks twice on the wood. From outside, the screech of the bolt being pulled back and the lock clicking open. The sounds that would usually send his heart soaring in a blaze of excitement now leave only a deep abyss in Matthew’s chest.

His body heavy, legs feeling as if they’ve been filled with lead instead of blood, Matthew takes a step forward, outside. Not into freedom, this time, but into further confinement. 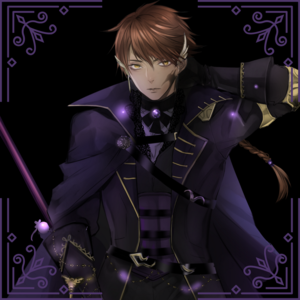