The sound of metal objects clinking together pierces Vivien’s ears, rings loudly in her skull and she moans out a protest. She can’t feel most of her body, her sensations are focused entirely on her head, as if she was an entity inhabiting it and nothing else. Her eyelids feel heavy and clumsy, barely responding when she tries to open them. Light filters in through them, strong and blue-white against the darkness of the room, fracturing into a tiny million sparks through her lashes when they flutter. There’s a strange aspect to it, as if its source is not a singular, uniformly shaped focus. It seems fractured, angled and curved at different points, shimmering as if it’s almost alive.

Symbols, she realizes as she watches their projection on the ceiling. Letters and numbers she barely recognizes, precise shapes that seem to squirm and writhe with the light. The circles etched into the ground are glowing, much like the ones she draws when casting. The dolls and automatons, creatures that aren’t human, that she has never known what they are, are able to perform thaumaturgy spells.

This sudden revelation shakes her consciousness into full wakefulness. Her body still refuses to obey her, she can’t quite feel anything below her neck, but she observes her surroundings keenly underneath almost closed lids. Acolytes come and go between this and the other chamber, carrying papers they silently show each other before resuming their former positions. The ones at the tables consult the sheets and turn back to their concoctions, adding this or that ingredient from labeled, opaque jars, adjusting the heat. She can barely distinguish the activity at the other side of the room, where Darren lies tied to a chair like hers, the murmured voices that surround him like haunting ghosts.

Vivien instinctively searches for the nuns, not wanting to be alone with the automatons and finds them standing at attention to her right, next to a sterile silver cart filled with surgical tools, a basin of water, bloodied gauze. Her gaze travels further down and she lets out a gasp that comes out as a strangled moan.

Cold terror invades her body and mind when she sees the chair she was strapped to has been moved to make her recline into a half-lying position, her legs dragged up and open. An acolyte kneels at the foot of it, peering at her naked body, extending his hand to accept the tools the nuns offer him.

Men aren’t allowed to touch Brides, Vivien repeats to herself like a mantra, trying to avert her eyes without calling attention to her wakefulness. Such is their title because they are brides of God, to be kept pure until they complete the Pilgrimage. But acolytes aren’t men, they aren’t even human, and her attempts at rationalizing don’t quite work.

Vivien’s stomach revolts. She tries to kick at his masked face, but her legs refuse to heed her. The restraints aren’t even needed; whatever it was they gave her has completely incapacitated her. Hot tears prick at her eyes and, as she watches, the dolls pass the automaton a scalpel that glints silvery and sharp in the supernatural lights. He grabs at Vivien’s thigh, pulls it further apart from the other as he brings the blade closer to the inner side.

The feeling of a blade being dragged through the sensitive flesh of her groin and Vivien gasps out not quite in pain, but disgust. She wants to struggle again, knows she shouldn’t or they may end up cutting something vital.

“Nothing,” she hears one of the nuns announce. “Let’s move on to the brachial, next.”

The nuns move the cart out of the way and the acolyte walks up to her right arm, the blood-covered scalpel held between his gloved fingers. Vivien tries to move again, to scream, to do something to stop him. But her body remains unresponsive, whatever anaesthesia they’ve given her too strong to be overcome by the adrenaline being pumped into her veins.

The acolyte lays his left hand on the inside of her upper arm and Vivien’s stomach contracts painfully, turns upon itself. Her throat works as if she’s going to wretch and, for a panicked moment, she fears she’s going to suffocate in the potion as she throws it up, unable to move her head to spit it out.

A distant kind of pain blooms in the thin skin of her inner arm and her brain focuses on the new threat, screaming at her to run from it or fight it. Vivien feels the acolyte parting the flesh with his fingers, moving his head aside to show it to the nun.

“The cord is still present,” the doll announces and, somewhere, Vivien can hear the rasping of a pen against paper. “But no growth.”

Once again, the pen scratches against the paper, then footsteps sound out as an acolyte walks into the other chamber.

Vivien’s interest is so piqued that, for a moment, she’s able to rise above the nausea and fear coursing through her. What cord is present on her artery? What kind of growth could be there? And is it a good or a bad thing that there’s none?

The nun’s tone is neither exhilarated nor disappointed, so she can’t tell. But she has one small piece of information now, something that she can take with her and work on later to help her uncover the greater mysteries of the tests and the Scions themselves.

Yet, it’s not enough. She wants more. Vivien keeps only the barest sliver of her eyes open, evens her breathing so that it seems she’s still in a deep sleep. If she can fool the dolls and automatons, she might be able to hear something else, something even more important.

The acolyte making the incisions lets go of Vivien’s arm, drops the scalpel onto the cart and moves away. The nuns come in closer, instead, one or both of them still dolling out orders. Vivien can’t tell which it is; their voices are all the same.

“Let’s commence the psychological tests, now,” she says. “And we’ll end with the compatibility ones once the Lord Knight is ready, as well.”

Vivien’s heart jumps in her chest as excitement mixes with her fear. Not only will she have information for herself, but she’ll have something to share with Darren, as well. She’ll have something to share with all of them, when the Royals come and the ceremonies take place and they’re allowed closer than they ever are, during mass. The perfect opportunity for passing small notes between themselves, like unruly students during class.

The risk is much greater, however. It has always been, but it has never stopped them from doing it before. They have nothing else.

The warm currents whirling in her chest freeze when Vivien realizes the nun is standing stone still by her side, her blue-green eyes focused intently on the Bride. Too late does she remember to deepen her breathing, to relax her muscles in the mimicry of slumber. The doll has already seen through her.

“Bring another dose,” she calls out. “She’s waking up.”

The only response to her words is the rustling of robes, followed by a heartbeat of suspended silence broken only by the sounds of the working acolytes and the whirring coming from the machine hidden from sight in the next chamber.

Vivien wants to cry out, to call for Darren, but what help could he give her, as bound and drugged as she is? She gives up all pretense of sleeping, looks around for something, anything she can use. The cart with the surgical tools is out of her reach. She can’t undo her bonds on her own and, even if she could, how far would she go, in a room full of dolls and automatons? There’s no escape possible. As her mind begins to drown her in this heavy, thick certainty, her breathing quickens, her body spasms as if trying to get free of its own accord.

Before Vivien’s mind can settle from the panic, before she can gain back enough of her rationality to think of any way to fix her mistake, a gloved hand clamps around her face. Fingers burrow into the articulation of her jaw to force it open and something treacly drizzles onto her tongue. She gags at the taste, sweet and vile like rotten fruit, tries to spit the concoction out and almost bites her tongue when her mouth is forced closed.

Another hand covers her nose and Vivien can’t help the scream that erupts from her throat. It comes out barely audible, strained and muffled. It’s the last thing she does before she loses control of her body again.

The numbness starts setting in, her mind slowly sinking into a grey fog. Her rapid breaths even, then slow as the mist spreads and numbs her mind as well, eating away at the clearer memories of what she just witnessed. 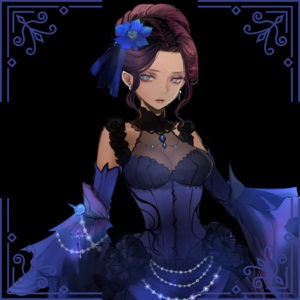