A soft murmur spreads among the crowd at Alphonse’s words. The Vicar smiles, the smile of someone who is fully aware of how handsome he is. Kayla can’t see it. She can’t see how his golden hair goes perfectly with his white robes, how his sharp cheekbones complement his strong jaw. All she can see is that insidious smile and she feels sick to her stomach.

The Vicar’s eyes are set on her and she can’t move. Her entire body has turned into liquid lead, heavy and impossible to control, tethered to her chair by a gravity stronger than the natural law. By her side, Joshua’s chair screeches as he pushes it back, makes to get up and intervene.

But someone is already moving through the Crosses’ podium.

Darren. He walks to the edge of the wood stage, long legs crossing in an almost predatory stride before bowing down towards the gathered nobles and clerics. Kayla holds her breath as he opens his mouth to speak.

“Forgive the interruption, Vicar Alphonse,” he begins, turning to face the man with a smile that is even more disconcerting than the Vicar’s. “I must say I’m terribly offended that you didn’t even think to nominate either Vivien or myself to make the speech. As an apology to the House of Crosses for this affront, I ask that you’ll allow me the honor.”

His tone is good-natured but there’s nothing of that sort of feeling in his expression or stance. Darren seems like he’s ready to strike if the Vicar dares to deny him.

Alphonse’s smile falters for a fraction of a second, then he bows his head towards the Cardinals of Crosses in apology.

Darren nods his thanks towards the Vicar and Kayla feels heavy chains tightening around her chest, robbing her of her breath. She’s being saved, yet she can’t help the feeling of impeding doom invading her mind.

“I propose a toast,” Darren says and raises his crystal goblet, filled with dark red wine.

Kayla is terrified, her whole body trembling as she watches him, but the Knight is the very picture of composure, the hand that holds the goblet steady and his smile unfaltering.

Darren stops, casts his gaze up to the ceiling as if in deep thought. Kayla’s heart beats wildly in her cramped chest, her hands are clammy with sweat when she clasps them together. She can almost guess the words that will be spilling from the Knight’s lips next and the fear she feels for him fills her entire body, numbs her down to the tips of her fingers.

“Be mauled by demons? Eaten by their God’s own angels? I’m not quite sure. But I am sure they were happy to leave, at least.”

The words resonate with some lost memory within Kayla’s mind, but she can’t quite grab at it to pull it to the surface. Darren’s unorthodox ideas are well known, they’re what got him softly expelled from the Church’s own army and thrown into the University. If they couldn’t make a soldier out of him, they would have him as a scholar, but they refused to relinquish their hold on him. It was there that Kayla had found him, steeped deep into the despair for the things he had seen and done when he was only a boy. In time, she had come to understand his views, to even share in them, for how could someone suffer so much and not hate the God that threw all this misery in their path?

All eyes in the room are trained on the Knight, now, most of all Vivien’s, who seems to want to impale him. Kayla glances to her side, catches a glimpse of Joshua’s emotionless features before focusing on the Wings’ Scions. Matthew’s face is a mirror of her own emotions, while Sarah isn’t bothering to hide her satisfied smirk. For an irrational moment, Kayla both hates and admires her.

When no one moves in response to his words, Darren shrugs, brings his goblet down to his lips.

“Guess I’ll drink alone, then,” he says and tips the drink back.

He empties the cup in one go as the others watch, Kayla still feeling as if she’s in a dream, not witnessing something real. To further emphasize his point, Darren raises his goblet again before walking back to his seat and sitting languidly down on it.

A hush and a stillness fall over the room after his dramatic exit, the moment stopped and perfectly poised between the crowd’s building anger and their inability to deny the truth of his claims.

Kayla jumps from her seat, her head snapping to the side, and she almost hisses at the maid whispering in her ear before she catches herself.

The doll lifts the platter in her hand, which holds two small pitchers.

“White wine or red?” she repeats. “For the toast.”

Kayla looks at the crystal goblets in front of her. Only one is filled, and with water, unfit for a toast. If there was one actually happening. But the maids can’t comprehend the subtlety of human emotions and speech, act only on the face value of every word.

She has no stomach for wine, but hopes the white will at least be milder, if she ends up having to drink it.

Next to her, Joshua drains a whole goblet of red, followed suit by Sarah, who tips hers in Darren’s direction, first. Matthew takes a polite sip out of his, while Vivien doesn’t even touch her goblet, waves away the maid when she tries to fill it.

Kayla is torn, wanting to thank Darren for his interference, but not wanting to chance the rage of the nobles and clerics, not when she’s so close to achieving her goals. She picks up her goblet, raises it in Darren’s direction, but doesn’t drink. A compromise. A half stance that doesn’t sit well with her, but is all that she can offer, at the moment.

“An unorthodox toast, in my humble opinion,” Alphonse says, and his smile is back, wider than ever, seeming to almost split his face into two. “But I agree that we should remember our past heroes. In their memory.”

The Vicar raises his goblet, sweeps the room with his gaze once, and takes a hearty gulp. Unsure murmurs follow as people repeat his toast, bring their glasses to their lips to drink in memory of the ones they’ve lost.

The Scions sitting at their round table are tense now, their gazes darting around the room as if they’re suddenly surrounded by enemies. They’ve lost their power or, rather, they’ve realized they never held any. Kayla feels her heart tightening in sympathy for them. They’re young and foolish, thinking that being chosen to undertake the Pilgrimage was their immediate rise in status. In truth, they’re nothing more than glorified scouts, unless they can deliver Eden to the nobles and the clerics.

The Knight of Roses throws Darren a venomous glare but the original Knight of Crosses doesn’t even see it from his raised platform. It makes Kayla wonder at this small privilege they have, of always being put above any visiting Scions. Perhaps it’s simply out of respect for their seniority. But maybe, there’s something else. She desperately wants to believe so.

Without meaning to, her gaze wanders to her parents. She identifies Annalise’s long black hair, so similar to hers, before she even spots her red dress. Oswald is sitting by her side, his golden mane making it seem more like he sired the Roses’ Scions sitting at the table near his than his own daughter.

Her brothers must be nearby, as well, but the King and Queen are sitting with the Cardinals of the House of Crosses, the Leaders of the House of Wings, their own little set of six, the ones who inherited the titles of the Nephilim of old, after they gave up on their quest for godhood and disappeared, leaving mankind floundering.

If anyone has answers, it’s them. They were the ones who created the Knight-Bride system, who bound together the people who brought about miracles by biting into the Fruit of Hell and having their bodies used as vessels for the lesser gods in exchange for a miracle. Whatever reason they had for it, they must have known something. The Nephilim must have left some scraps of knowledge behind, the same way that they left their dolls and automatons. Yet, whatever they know, the upper echelons have never shared it, not even with their sons and daughters, before or after they were possessed by creatures no one could hope to comprehend in exchange for having their pain assuaged.

Kayla wonders, for a brief moment, if her entire life was exactly that; a theater set up to make her despair and ensure that one of the first Scions would be their own daughter.

She brushes the thought aside. Surely, even they wouldn’t be so cruel. Her decision came about due to a set of unfortunate circumstances: being the first child, but born as a woman followed by three brothers, her parents’ status, her interest in metaphysics and folklore, her stubbornness. She has no one to blame but herself for having chosen to walk into that demonic garden and eaten its fruit, for dragging the others with her and for the tragedy that ensued. And she has walked away with her personal miracle, so even doing that is being ungrateful.

Her conscience appeased, Kayla looks away from her parents. They haven’t deigned to look at her, not once during any of their visits to the abbey. And this will be their last chance. Whether they will regret it or not, she has no way of knowing. But she has chosen to let them go and has found that she’s much more at peace with herself for that.

Her heart lighter, she dares steal a glance at Joshua, to reassure herself of where her future lies. But what she sees makes her blood run cold.

The Knight is staring at the steps leading up to the podium with a look of pure hatred, as Vicar Alphonse climbs them slowly, his sly smile plastered on his perfect lips as if it was a devil’s mask. 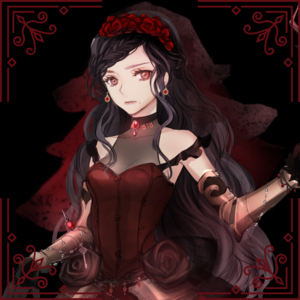