"I need Delphine Kelley's room key," James panted. He leaned over the hotel counter as far as he could. He kept his face hidden, shielding himself with his blazer over his head like a hood. He didn't want to see anyone, especially not Delphine-no! Especially not Eric. This can't be happening. He was going mad, being driven out of his mind by that fucking werewolf. James had worked hard his whole life to avoid this very problem, this exact drama.

HE HAD ONE RULE.

JUST ONE. IT WASN'T EVEN A HARD ONE.

"I'm her apprentice, James Connolly," he insisted, tapping his foot up and down.

The receptionist took her sweet time. He could hear the reception’s music from here and the merriment of people whose lives weren't completely ruined. If Eric Silva practiced any form of mercy, he'd take whatever Delphine would say to him and completely ignore it. If life turned out not to be so cruel, Eric wouldn't believe her. Finally, the receptionist gave him the key and he bolted to the elevator.

Realizing something, he spun back around and told the girl, "If anyone asks, I wasn't here. You didn't see me. I am not in Delphine's room. I'm dead. I just keeled over, right in front of you and you tell them I'm laid up in some morgue."

Without an explanation, James slipped through the elevator just in time.

"Can I leave?" Frances asked, slouching so deeply in his seat, he might as well have been lying down to take a nap. Out of compulsion, Eric made sure his posture was perfect and fixed his shoulder.

"Just wait," Her Majesty Arista said. "We'll go back to the party together."

Eric stood in the corner, arms crossed and rubbing his jaw. Something was off. James acted like he had seen a ghost. Actually, he already looked rough well before he took Eric's hands. James' hands were clammy and cold, but they held onto his fingers for dear life, like letting go would kill him. His skin glowed from orange to red and only grew colder. He was like an exploding star.

Eric wasn't a nice man. A nice person wouldn't have forced James to perform another vision. Sure, he didn't put a gun to James' head and forced him to give Eric a match, but Eric didn't exactly make it easy for the Oracle to say no.

"Hello! Hello!" The doors flung to the side suddenly with a loud bang and a tall woman exploded into the room with her arms out. The legendary Delphine, Eric assumed. The lights in the room brightened by her voice. She brought a scent of berries and champagne into the room. Her natural scent smelled more like cupcakes than anything, too sweet for his teeth.

"My favorite work of art!" She exclaimed before pulling the King and Queen into an inappropriate hug. She had less grace than James, which was an incredible feat. She continued to gush, "my true masterpiece!"

"Oh, Delphy stop," the Queen slapped her old friend's shoulder, "we know you say that to everyone!"

"You caught me! Clever girl!" Delphine laughed, turning to see Abigale and Collin hand-in-hand, sitting in the corner. They've been speaking in low whispers since they got engaged. Their secrets turned their cheeks red. "Look at the new couple! A fine choice! James did very, very well," She winked, knowingly.

Eric knew Abigale and Frances made the better match for the coven.

James chose Collin because he figured out they had fallen for each other. During the summer, Eric caught them kissing and Collin swore Eric to secrecy. James’ choice was not only a childish whim, but an incredibly selfish act. James turned his back on two entire covens just so Collin and Abigale could sleep in the same bed. No matter how hard they worked as James kept insisting, Frances would have made the better king, despite sometimes being...

Frances yawned while he adjusted his crotch to a more fitting place.

However, it was also a bad idea to give the decision to a matchmaker. It was just plain silly. No offense to the royal family, things like marriage shouldn't be left to chance.

"Now who is this young alpha?" Delphine called, twirling around until her eyes pinpointed on Eric. Her ruby lips widened into a fiendish grin. She stared him down like a huntress finding her favorite kill. "Now," she purred, slipping her gloves off. "Why would a fine young thing like yourself need any help?"

Delphine laughed. "It's fun being queen, isn't it? Well alright. Let's see what drove James out of the room. I will say three visions are quite difficult to have one after another. C'mere sweetie," she motioned and with a sigh, Eric sat down again. His father was going to have a fit when Eric got home. He'll shout over and over and over again about how he'd been begging Eric to do this for years, since he was eighteen and wasn't interested in dating.

When the right time comes, he'll look to the pack and find the perfect partner, a wolf that was as proud of their fur and claws as Eric was. He wanted to be able to run with a powerhouse as great as him, someone as equal and brilliant. He sighed. That sounded like a giant hassle that got in the way of real work. Actually, it might be a good thing to get set up.

The realization burned the tips of his ears.

I just love this story, I hope James doesn't go on that date with Baines 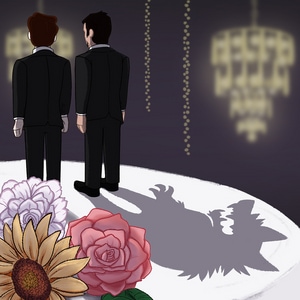