It is a sylvan early morning, around three. It is kind of difficult to see a slight sign of sun beam, yet. Outside there is only a sound of wind and some early birds’ chirps. Cold atmosphere is set upon everything in the little and welcoming Lake Windsor Circle residence. Not well known as a residency, but the people and the location are great.

Again, everyone is still asleep, there is no other thought for the next four hours except for sweet dreams and peace. And like a sweet lunch break, for some people peace doesn’t last that long.

In one house, Lawrence, mostly, and his aunt Claudia are having a hard time of sleeping, because of their little, “loyal” and quite energetic friend Tucker. A dog. Man’s best friend. Furry and fluffy. Adorable and cute. Strong and adventurous. All qualities that are possible to notice after five minutes you have lived with him. The other ten bad ones you will see them after two weeks.

Three months have passed since Lawrence have known Tucker and like any other morning this one starts in the same way. Barks, barks and barks. Barks at the flower. Barks at a shadow. Barks at a fly and anyone who gets near the house. Sometimes Lawrence thinks that he enjoys the essence of barking. In fact, if barking was a discipline Tucker would be the champion.

Anyway, at three and ten in the morning, Lawrence hears the first bark of the day and as a tradition he wakes up from his bed, walks down the stairs and reach the living room where the source of the problem comes from. He is staring at him, meanwhile the fur ball focuses on the “real” problem: some change of lights. Lawrence who has no time to waste in “no sleeping activity”, pets his head for a good while, scratching his belly and chest. Tucker seems to like it, but in reality… it is not enough!

As soon as Lawrence finishes to pet him, Tucker starts to bark again and this time he’s faking it for good. No stranger or diabolical shadow reaching the door. Just looking for some attention. Something that any wise owner would notice immediately, it doesn’t come up to Lawrence little mind.

So, Lawrence fast pours some water on Tucker’s bowl, not wanting to lose important hours of sleep. Today it’s going to be busy at work and it’s necessary for him to sleep as much as he can. Hopefully, Tucker seems to enjoy the water, licking every little inch of the bowl. Maybe this is going to be a good time to sleep and rest, but at five feet away from Lawrence, a bark states the exact opposite.

With so much discontent, the guy now takes a little bully stick from a kitchen closet and gives it to the little creature that starts to bite it like he hasn’t eat in days. The stick is strong and robust enough to keep Tucker occupied for a while and give Lawrence time to disappear and land on his bed.

Tucker plays and bite the stick, but he’s now worried someone could steal his treasure and the only place where to hide it is in the sofa. There is no safer place than the sofa of its house. Every time he plays with his master, he can never find it.

He hides the stick and waits happily for Lawrence to find it, but he doesn’t come. Minutes and minutes pass. No sound is heard in any other room. Outside is the same, except for some early morning cars warming up for the morning; and like clouds moved by the wind, these horses of steel follow their unconscious routine even today.

This is so lonely, and Tucker wants to break this spell. So, he waits. He waits and waits, but he doesn’t come. He understands that he won’t come back. He begins to moan and cry, like he always does when he wants something. It’s a kind of last resort tactic, but it always works.

In fact, after few minutes of moan, aunt Claudia calls Lawrence to take care of Tucker’s problem. Lawrence doesn’t answer yet and consequently her voice rises of intensity, which wakes her nephew up and, with a face that declares “pure joy”, he leaves his bed, again, walks down the stairs, again, and reach the problem of the source. Again.

When he came back to the living room, Tucker stopped moaning and he was just sitting there starring at Lawrence. Probably because he was waiting for his master to find the stick, but from the look on his face, Lawrence was neither thinking about it and, in fact, he was about to leave. However, Tucker moaned again as blackmail and Lawrence was forced to stay.

The game repeated itself five times and Lawrence, who couldn’t take it anymore, went back to his room, took a pillow and blanket, so he could sleep on the sofa. And in the moment, he was going to sleep again, Tucker remembered of the stick and pushed Lawrence harshly away from the sofa and started to bite the stick vehemently.

Lawrence tried to move Tucker away, but his teeth were saying quite the opposite. So, he decided for that night to sleep on the floor, curling up on himself and thinking how his busy day of work already started. 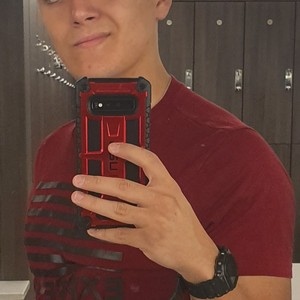 Sleeping is important. Maybe even more important than eating. We need at least eight hours of sleep to go through the day. Four, if you have a Tucker in your house.
Ladies and gentlemen, here comes Tucker! 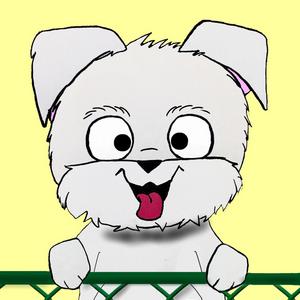 Tucker is a normal dog. The living representation of "man best friend", and Lawrence loves him.
...ok, just kidding! Let's be realistic.
Tucker is not normal at all. He's not your kind of average dog you wish to see during the day, noon, evening, night, nor your dreams. He's not calm, obedient, nor quiet. He's just Tucker.
What best word to describe him?! In fact, there is no other thing that Tucker can do, but being Tucker.
Its fellows dog knows him too well from the bites they have gotten, and Lawrence more than anybody else is aware of his existence. As owner of Tucker, Lawrence is the primary victim of his dog shenanigans. Because of him, he lost hours of sleep, and tons of school supplies; and the only one that stops him from committing a dog-icide, is his aunt Claudia. The one of only few people that loves the little white fur.
So, will Lawrence survive from the Hurricane Tucker even today? Let's find it out in this new adventure. 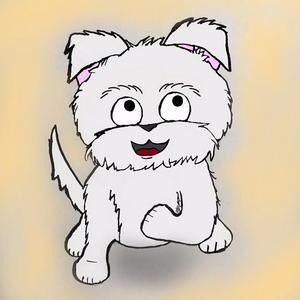