They're here, aren't they?

Ever since I died that day, they've been following me.

Watching me from eyes within the cave.

I can't forget what I witnessed when the angel attacked…

Their screams of terror

The people burning to ash

I was the only one that lived that day.

All I ever wanted to be was a hero. In our society, heroes are vigilante civilians with passionate righteousness, using morality and their understanding of the law to help the knights serve justice. Our town in the mountains relied on the Hero-System because there were not enough knights. As a town embedded in the hills, Havenport’s town structures and roads were quite a challenge to reach for travelers to reach finally. Most of those that live in Havenport was born here.

The caw of crows woke me out of my sleep. I looked down at my small hands. Abnormally, ridiculously, child-like small hands. What the hell was going on? I was in a bed inside of a wooden room past my hands. As far as I remember, I was in a cave-- watching the angel strike from a different point of view. They usually fly through the sky at the speed of light, passing by and observing the earth below. But this one was different-- it attacked our city. With its six wings spanning from a circling orb of eyes, it lasered down our mountain town and left no survivors. Was that hell just a dream?

My mother walked into the room with a loud thud as the door closed. She dressed in brown peasant rags, her hair up in a ponytail. Her black hair resembled mine, but her eyes were green instead of blue. My eyes were that of my fathers, who I had never met.

“Are you alright, Kazuto--bad dream?” My mom asked me.

“Yeah, mom,” My voice was pre-pubescent and high, “It was awful.” it had become utterly apparent that I was in the past. My mother seemed a little under ten years younger, which would make me somewhere between nine and eleven years old.

Mother approached me and locked eyes with my face. She then widened her grin from ear to ear.

"You know what used to always  cheer you up? A nice walk! Say-wanna walk with me down to the market? I have some debt to clear up."

My instincts took over and forced me to respond, "No." It was a strange and unusual feeling. I had never spoken against my will before.

Mother looked over with a skeptical face before saying, "It's alright. Just try to be certain of things the first time."

Mother held out her hand and invited me over with a smile. I grasped her hand as she opened the door to the bright light of a summer day.

Christ, the town of Havenport was so much more lively than I remembered. People were out enjoying the weather. Some pedestrians were trading goods, and others were simply conversing. The red and brown brick buildings felt like castles to someone as small as myself. I continued to hold onto my mother's hand, gazing as we walked towards the bridge that crossed over a river that led to a waterfall.

It was as we were walking that I noticed small details. The tint of the sun was one I had seen before. The position of people also gave away clearly that I had experienced this day before. My mother had left me alone the first time I had experienced this day and had come back home wounded and crying. We tried to get her to a healer but did not have enough money.  The conversations of people that passed were even lining up with what I overheard from home.

Mother got robbed that day, somewhere near where we were. But I was going crazy trying to figure out where. I vaguely remember her bustling through the front door with water on her dress and blood on her torso. But I was so emotionally distressed I didn't question it. I just went to find a healer.

That was when my ears picked up the sound of the trickling river water. Her wet dress may have been from being attacked near there-- as there was nowhere else with a large body of water on Havenport.

"Mom… maybe we shouldn't cross the road?" I asked. My mother gave me a confused look and began to strudel faster.

"I'm serious, mom," I said, brushing some of the dust off of my overalls. "Isn't the other way downtown faster?"

My mother shook her head no and continued to walk off the bridge. The woman was God damn determined.

There was a quick interaction when she stepped off of the bridge. Standing before her was a short hooded girl about the same age as I.

"Ma'am," the young girl said, holding a bouquet of white flowers, "Have you seen my parents? I got lost at the flower shop." The girl asked.

The mother turned her attention to surveying the area. It was in that split moment that the young girl had unsheathed a dagger from the bouquet.

Once again, I couldn't control myself. My body flung itself forward, propelling into the girl. I tackled her into the concrete, making her drop the knife as well. Both of our bodies dragged on for a moment until coming to a halt of momentum. The young girl began to punch and kick at me to push me off, but I gripped on as hard as I could.

"What the hell is going on?" The bystanders asked.

"Did that girl have a knife?"

Everyone who had viewed the incident murmured amongst each other.

"Get off of him!" My mother yelled as she approached the two of us.

The bandit reached for her knife, grabbing it with the full extent of her arm.

"Get any fucking closer, and he's dead!" The girl threatened. Just who the hell was this kid? Who holds someone hostage at ten years old?

That was when the shining blue armor and elegant hero’s cape appeared. The hero is known as The Hero of the Shadow road towards the scene with dark spiky hair and gray eyes and dismounted his horse.

The hero whispered something as he ran up and pushed the young thief off of me. Only a few people witnessed the scene at hand, as many had left once violence started.

"Well, we can't just attack someone in broad daylight, can we?" He said to himself.

My mother had tears in her eyes. She fell to her knees, saying, "I can't thank you enough! My son, he loves heroes, Luke you." To the hero of shadow.

The hero of shadow began to laugh to himself. What started as a small giggle had transitioned into an uncomfortable to witness scream laugh.

“The hell? How could a kid see through that attack?” The hero seemed disgruntled. His eyes darted from left to right as beads of sweat fell down his face.

“Mister? Are you alright?”

“Word to the wise, kid… Heroes aren’t everything you thought they were.” The hero of shadow muttered.

Before I could question him, I saw him whip his weapon down towards my gut. With a single swift slash, my torso dismembered from my legs.

“Kazuto?! Kazuto!!!” My mother screamed out to me. Mother, I’m sorry. I would respond if I could.

“Guards, clean up this fucking mess. Arrest the woman; make sure one who saw this gets out alive.” The hero of shadow demanded.

All I ever wanted to be was a hero. 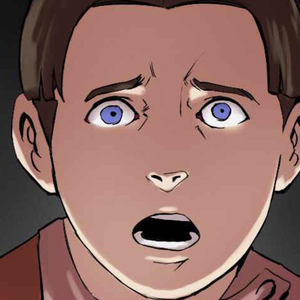 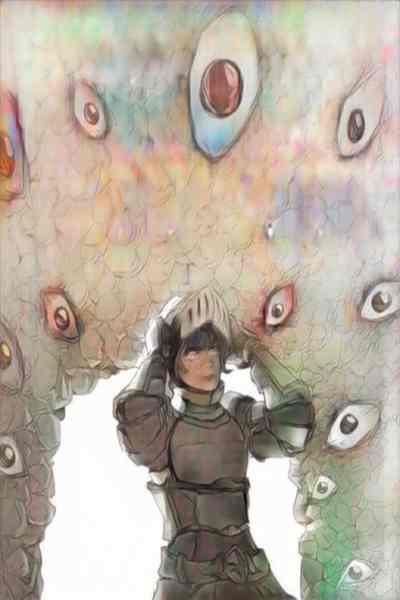 In this world, Angels were the divine protectors of both man and beast. Heroes were those brave enough to assist knights by performing vigilante work and community missions. These were the principles that Kazuto knew to be true... and was a fool for believing. The angels turned against the world, burning down his village. The heroes turned out to be corrupt and evil.--and Kazuto was set to use his power to respawn to correct both.

Read the comic at https://www.webtoons.com/en/challenge/dark/list?title_no=725480 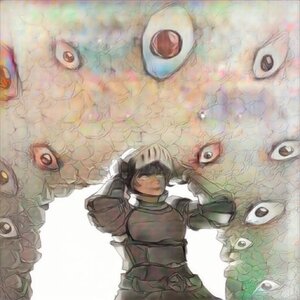