Viridian swerves to avoid the three women in the road when he hears the screeching of Derix’s tires as his powder blue car hurtles to a violent stop.

He narrowly misses Derix’s car—and the girls—but his own vehicle twists backwards and the wheel spins out of his hands, burning the tips of his fingers. There’s a mighty crash, the ear-splitting scream of the death of his paint job against the guardrail, and the gunshot-like crack of glass from the windshield.

His back wheel hits something—a bump, a rock, a body—Viridian doesn’t know doesn’t care, because when the car flips and for a single moment he can see both the asphalt below and the twilight of stars above, there is only one thought in his head.

The roof crushes inward when he hits the road. The women are screaming, and through the haze of dizzying adrenaline and the thrill of danger tingling in his veins, Viridian thinks he hears sirens.

A car door slams shut, and quick footsteps quake the ground as they approach.

Derix’s limited edition Ukratian shoes appear in Viridian’s line of sight, followed by his head. His handsome, tanned face splits into a grin as golden hair falls into his eyes. “How’s that for stuck up?” Derix asks, smug.

“You’ve still got a lot to learn about having fun,” Viridian answers, reaching to undo his seat belt. He kicks open the mashed, wrinkled door, and gets to his feet beside the wreckage. He smooths his hair, glances to the college-aged girls he’d swerved to miss like a total pro. He hopes to god they hadn’t watched just now— it’s not super cool to crawl out of a car wreck.

They don’t appear to care regardless, because one of the girls who comforts their shaking friend notices him, and gasps.

The shaking girl, a cute thing with a head of short red hair, turns to look, fear replaced by wonder. “Oh my god! We were almost hit by Prince Viridian!”

He flashes them a dashing smile, making sure to expose his perfect, pearly teeth, and all three squeal. Viridian hears the sirens again—they’re closer now, and he can see the red and blue pulsing lights, fuzzy against the stone city and desert backdrop. “Hello,” he greets, and the ruined vehicle behind him begins to smoke.

Derix snorts into his sports coat sleeve, disguising it as a cough. “Here we go...”

“What would you three be doing out at such a late hour?” Viridian asks.

He holds her gaze a moment longer. “It is now.”

He approaches, taking Marnie’s slim hand in his. “Ladies,” he murmurs, “I cannot tell you how pleased I am that you’ve avoided danger this evening. I should love to stay and chat, but I’m afraid my friend and I must be going. Those officers cresting the hill are members of the press in disguise. They’ve been tailing me for days now, and I am at my wit’s end. May I count on your discretion to keep this, and our escape, a secret?”

“Of course, my prince!” Marnie promises.

She’s trembling again, eyes fluttering between their clasped hands and his face.

He leans down, raising her hand to his lips. Gently, he kisses it, and murmurs, “Thank you, my lady.”

She’s too overcome to respond.

Derix raises a fist to his mouth and clears his throat. “Your Highness, we must away, lest the media catch us.”

Viridian climbs into the passenger’s seat of Derix’s powder blue car, rolls down the window, and waves goodbye. “Fucking cockroaches,” he mutters through the teeth of his smile. “Don’t they know to cross at a damn crosswalk?”

Derix bursts out laughing as they pull around the smoking debris and speed down the road, climbing way over the speed limit. The cool, evening desert air whips at their faces, the car passing blurs of spiked cacti and dusty stone streets. “I swear, you’re completely crazy,” he says. “It was your idea to street race, Your Highness.”

“You said no one would be around.”

“They totally bought your lie, anyway,” Derix notes, fair locks ruffling in the breeze. “Do you think they’ll keep quiet?”

“I’m a prince. The moment they recognized me they would have jumped off a cliff, if I asked them.”

“What about your car? It’s definitely totaled, but they’ll still know it’s you because of the license plate.”

Viridian leans back in his seat, props his legs onto the narrow dashboard, and reaches into his trouser pocket for a cigarette. “What about it? I can’t drive it if it’s totaled. I’ll just get a new one with my allowance. When they trace it back to me, my PR representative will cover for me. Wouldn’t be the first time.”

Viridian shifts in his seat, fingers finding nothing but loose threads in his pockets.

“Damn, it must have fallen out in the crash—got a light?”

Derix flicks a lighter on at the end of the cigarette, and it glows a soft orange. “I didn’t know you smoke.”

“Won’t the king be pissed if you have another media crisis?” Derix asks. “Your first year of university was bad enough.”

Viridian clenches his teeth, losing his appetite for nicotine far too soon, and flicks the untouched smoke from the car window. “Who cares what he thinks? There’s a reason I live here in Bergula and not the Crown City. I’m so sick of him trying to groom me—if I’m lucky, he’ll forget I exist and have a new son. I’m not a puppet.”

“I guess I have a lot to learn about you. I thought you were out here to help with boosting Bergula’s economy. Or,” he laughs, “is that also ‘officially’?”

“Are you kidding?” Viridian snorts. “I can’t stand economics. I prefer street racing.”

Something buzzes in his other pocket. Viridian takes out his cell phone, screen cracked from the accident, and he tsks. The caller ID is impossible to read.

“Great. They already know about our wager. I won, by the way.”

“I disagree, Your Highness; I was in front of you when the race ended. You owe me ten thousand gales.”

Viridian snorts, swipes the call open, and holds the scratchy glass against his ear. “Norday?” he asks, examining his scratched up arms.

“I guess the Bergula police already called you? Look, no matter what those girls say, I never made a move on them, and no one was hurt. Just say the car lost control or something—that I’m perfectly safe, but shaken.” He yawns. “You know not to make a big deal of this by now, right?”

He pauses. The voice on the other line is deeper, on second thought, than his PR representative. Corvus Nott is the captain of the Imperial Guard in the Crown City. Viridian has never said more than three words to him before—why the hell is he calling his personal phone? “Corvus? What is it?”

There’s a moment of total quiet, and Viridian is hit with an incredible force of vertigo that stretches his stomach, his muscles tensing in horrid anticipation, breath catching in his throat. Everything is about to change, but he doesn’t know why, and Corvus’s silence only leaves each of his nerves a live wire, threatening to explode.

“Sire, you must come home at once. The king has passed away.”

His ears are ringing.

He can’t remember his father’s face.

An attendant secures the military sash across Viridian’s chest, then slides the ceremonial sword into its sheath at his hip. She hands him a pair of white gloves, and numbly, he pulls them on.

There’s a knock on the white door to his dressing room, and when it opens, the queen sweeps inside, wrapped in a knee-length midnight dress with dark tights, a round, matching hat tilted on her head. A sheer veil falls over her eyes and mouth, shielding onlookers from tears. Queen Primrose is still the most beautiful woman in all of Gaelenheim, but to Viridian, she looks like an undertaker, dressed in all black, even down to the gloved tips of her long fingers.

He can’t see her eyes through the veil.

“Mother.” There’s a pause. “I hear he died last week. Why did you wait three days to tell me?”

She doesn’t respond, but the nervous attendant swallows and trots from the room, short heels clicking against the wooden floors. The sound fades away once she rounds the corner into the hallway, and the queen, always elegant, folds her hands.

“Do you know that I found out how he died from the news on the flight back?” Viridian continues. “Corvus didn’t say a word. None of you did. How didn’t I know that my own father was sick?”

“His health had been declining for several months, Your Highness,” Queen Primrose says, tone emotionless. “We did the best we could to give him as much time as possible.”

“Months? Why the hell didn’t anyone tell me?”

His lips press together.

“You answer the phone for Norday alone, when you need him to clean up your mess. You no longer have the luxury of anger—it’s time you grow up and face your responsibilities.”

His mother is right, but it doesn’t make him any less bitter, and his heart swims in regret, in realization. He’s spent his whole life hating his destiny, blaming his father for the path he was born on, but he can’t turn away from it, not anymore.

After his father’s funeral, Viridian would be king.

And so begins the journey of King Viridian Gaelen X, the most obnoxious character I’ve ever written lmao

1) ladies you almost died, focus lol 2) This prince is a piece of work! 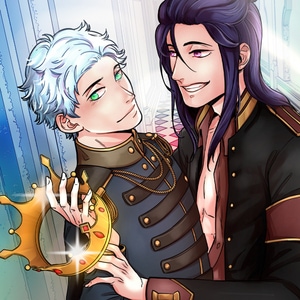