I Wish We Were

Summer in the tropics are nothing like what they seem in the movies or even in the tourism clip they played on the plane. Summer meant humidity that frizzes your hair and sweat drying on your skin, and no matter what you do flies and mosquitos will leach on you mentally, physically and, at this point probably spiritually. Glenda the housekeeper who doubles as my optimistic yet demanding babysitter, suggested (commanded) I "explore" outside while dinner was being set. It was a strange sight that I’ve grown getting use to, my cor on my charm bracelet pulsated in blushes of orange while her pearl cor around her neck glowed in turmeric yellow. I couldn’t even remember a time when my house back home wasn’t in an abundance of shades of red and purple. So here I am underneath a palm tree on the beach across the house, Glenda may not see this as exploring but the sand up my butt begs to differ

Time passes but I barely noticed, a side-effect of reading. A cool change fills the atmosphere, and the breeze from the ocean ruffled the loose stands on my head and on the earth. Then the sun began to touch the horizon and it was like someone pulled the plug from a drain, all the colours reacted. My right wrist was a dim green as I got up to head back to the house when a literal bucket of fish reminds me the universe loves the way I fall.

My eyes catch a blur of fish and the boy picking them up, you never mind the length of your hair until its dark strands are drenched in front of you blurring your sight and smell. I mutter words that would make my grandmother faint and before I knew it he was gone.

I march towards the house, wringing the water out my hair. Pushing the door open Glenda looks at me with eyebrows raised, “You’re getting the floor wet.”

My hand kept switching from pink to orange, “Really? That’s what’s getting to you?”

She laughs, “Oh, I thought it was the bucket of fish Daniel just dropped off”

“What! We bought fish that got dumped on my head!”

“Okay, shower time for you,” she was bright yellow, was she seriously enjoying this.

The next morning, I can’t get over the stupid guy and his stupid fish. I mean what kind of idiot does that, it took a whole bottle of shampoo to get rid of the smell but I swear its still there, lingering.

"Oh, stop touching your hair,” Glenda swats my hand from my head, “It’s fine. Now go do some exploring, its a whole new world out there."

"Its all part of the adventure!" Her boundless amount of optimism was starting to take its toll on me and I couldn’t stop seeing yellow as I practically limped my way out of the house with a few bills she pushed in my hand.

And so with no place in mind I follow the crowds, ladies with their coloured plastic bags whispering among themselves and men playing cards on crates on the sidewalk raising their eyes when they walk pass, both groups displaying an array of orange, I looked at them for a second and shoved my right hand in my pocket it was beginning to glow red, and the children were doing what children do, chasing each other pushing each other chasing a dog pushing a cart this place was an endless circle.

The market place was loud and smelly and colourful it placed my senses on a new high. I turn my head when a voice yells, “FISH! Daniel’s one-of-a-kind fish!” and voilà my culprit.

I stomp towards two boys behind opened crates of frozen fish, the boy who was yelling sat on top of a stack of crates laughing and swaying his legs like a child, the cor on his ring finger mimic the lime green colour of his shirt. The other just smiled shaking his head as he arranged some boxes ignorant of the annoyed snares they were getting.

"You! I think you have something to say to me" I say catching his eyes while his friend swiped his head from side to side as if he was watching a tennis match.

“Me?” he points at himself.

“Yes you, did you or did you not spill a bucket of fish on my head and sell the same fish to my house?”

His eyes widened and his cor on his beaded necklace blushed, “Oh, I got to get the thing from you know, bye!” he turns to move when his friend quickly grabbed his arm, though still recovering from laughing.

“Oh it was definitely him that’s the colour he gets when he’s nervous.”

“JJ,” the boy hissed and JJ turned giving him a sitting signal that owners do with their pets.

"I'm JJ by the way, which stands for Jericho Giles, which yes I know is JG but that just sounds dumb.”

The boy actually sat crossing his arms and huffing, I almost laugh, “Violet.”

"Nice to meet you Violet, oh and this is Daniel who is super sorry and will make up for it by showing you around."

Bewildered Daniel argued but JJ was already pushing him out from the stall, "Wait JJ the fish-"

He turned back towards me unsure, but took a quick glance at my wrist which was starting to fade to a bluish-green. He smiled, “Come on.”

So I needed to take advantage of my involuntary tour-guide, I needed to know my way around if I'm going to be here for the whole of summer.

"You're suppose to lead the way, tour-guide"

We've been walking through the market for a little while now when I realised that the meat and vegetables being sold turned to clothes and other accessories. My wrist turned to a bright yellow.

"The smell is gone"

He sighed, “Jeez, I thought something was wrong you went so bright,” he rubbed the back of his neck, laughing. He has a nice laugh.

And even brighter than my yellow his bead turned salmon, “I have to go,” he says turning.

“Daniel! Hi,” a voice says from behind me, Daniel stammers a response and I catch the name Venus, his cor was a deeper red now. I turn.

Venus was the epitome of a tropical princess, raven-haired and olive-skinned, she strolled towards us without a single evidence of flaw or sin. I almost rolled my eyes to the back of my head, not that it matters since my cor went a soft orange, lucky for me they didn’t quite know my colours so a polite smile would do for now. The butterfly brooch on her blouse shimmered a gross purple. She smiled back lighting up her entire face, man she was playing him like a string puppet. 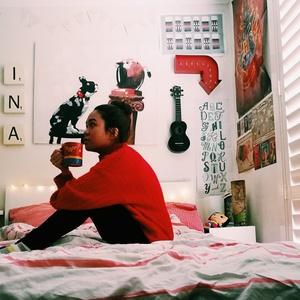 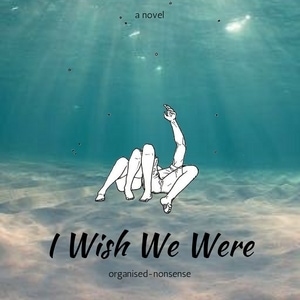 I Wish We Were

In a world where your heart's on your sleeve for everyone to see. A boy and a girl find their true colours.
Subscribe 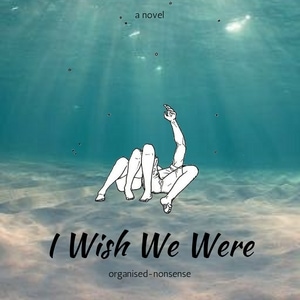