It is rather silly to believe in the supernatural, until one comes face to face with a witch floating in front of himself.  She had appeared to Mark before, but by this time he was used to it and the drink remained in his glass.  He looked up from his desk and saw Karina bent forward leaning in with the smell of lavender staining the air.

“Any leads?” she asked with a wide grin and shimmer of her gold spectacles.

“I’m afraid not, Karina.  But please leave me to my work or else I can’t get to your case.”

“Oh come on now,” she said.  “I’ve been here all day.  I saw you finish your recent case a few hours ago.  You haven’t gotten anywhere?”

Mark looked down to his left and saw the black cat staring up at him, almost as if its yellow eyes were smirking at him.  The damn thing must have wanted him in trouble.

“I thought I told you to keep that thing out of here, Karina,” Mark grunted.

“Not a chance, Mark.  How else can I be sure you are keeping your end of the bargain?”

Mark shook his head, “C’mon now, you know I would not blow you off.”

Karina heightened the elevation she was floating and the black mist encompassing her flickered in an aggressive manner.  It had even rippled her shirt and long skirt which almost mimicked the sound of a rushing wave.  Her beret fell down on Mark’s desk to release her long red hair as she revealed her hand and a light began to glow from it.  This terrified Mark before, but now he was worried that she was going to spill the drink across from his paperwork.  Mark lunged for it and held up his other hand.

“Ok, ok!  Please just calm down.  Look, Karina, I haven’t stopped looking, but I need a break every so often,” Mark explained.

Karina’s black mist settled and it retreated back into her skin.  She looked agitated, though she dropped her furrowed brow after a moment.

The shimmer in her glasses died down and the black mist expanded to swallow up the witch and vanish into the eye shaped pendant on his desk.  Mark sighed and looked down at the cat.  He showed it his middle finger to which the cat turned and ran out of the private detective’s office.  When left alone, Mark leaned forward.  It was too late tonight to start the investigation, but he would have his notes at the ready and begin first thing tomorrow morning.  Mark placed the photographs of Karina’s mangled corpse in one corner of the desk along with the designs of the emblems that were carved into her stomach.  It used to drive him mad to look at them, but ever since Karina made regular appearances it  made it somewhat bearable that he could see her “alive.”  Tomorrow Mark had was to follow up with an occultist to learn about these symbols, which would be the best lead he’s had thus far.  Mark then moved the eye pendant to the middle of the desk and spoke to it.

“Alright, Karina.  We begin tomorrow.  But please, let’s get some rest first.”

Karina’s voice filled Mark’s head, “Thank you, Mark!  And sorry about that…”

Mark left his desk and made his way to the bathroom to prepare himself for bed.  He looked in the mirror at the man whose eye sockets were so bruised that they may have been mistaken for makeup.  He splashed water through them and fixed his long brown hair that was falling over those eyes, but when he looked up again he saw the black mist form Karina again.  She was leaning over, pretending not to be staring at Mark in the mirror.  He smiled, and pretended not to see her in return.  Mark brushed his teeth and made his way to bed.  He laid down and fell asleep to the smell of sweet lavender that was coming from the seat right next to his bed.

Mark closed his eyes and drifted asleep.  Tomorrow he would help his wife find her killer. 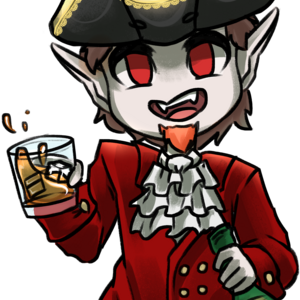 Starting point. Karina will be just a fun little adventure I write here. I hope you'll all like what I've got in store. 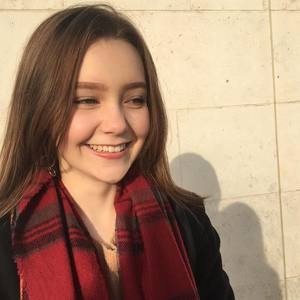 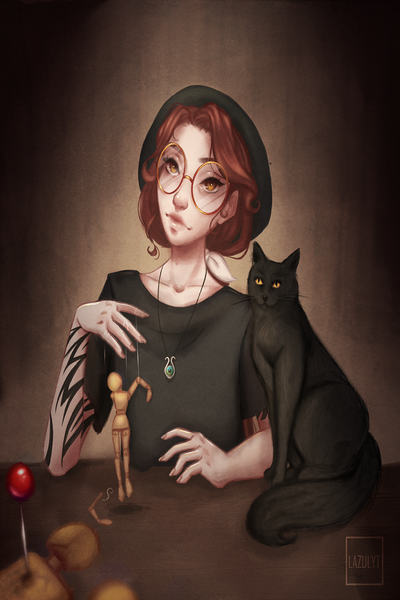 A private detective's wife comes back from the dead to search for her killer, and reveal a few secrets she has kept from him while alive.
Subscribe 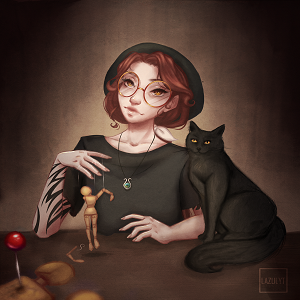