The rocket sputtered across the twinkling darkness of space, leaving a trail of gray smoke and debris in its wake.

"Come on!" The man rapped the dashboard with his fist. “Work!”

A panel in the back of the single cabin ship erupted into tiny, glittery sparks that rained over the brown shag carpet and set the hammocks that hung alongside the opposite wall ablaze.

A little girl in a tattered gray dress screamed. She rushed to her mother and clung tightly to her waist. The mother hosed the fire down with a chrome extinguisher, covering the flames with a thick, gray foam.

"Honey?" The woman said to her husband, "We need to fix that console."

"They don't fix those anymore!" He snapped back. Multiple lights across the dashboard started to flicker red.

"Damn it!" He said. He leaned over in the faded black leather seat and quickly punched a large round red button.

He quickly got up, slid the wall next to him open and went inside the closet. After moving aside a folded chair, a wooden crate filled with apples, a cardboard box containing a stack of canned food and a red gasoline fuel container, he emerged holding a roll of gray cables. More lights on the dashboard began flickering red.

An alarm sounded, filling the compartment with the ringing of a loud bell.

He glared at her. "They don't fix any of this, anymore!”

She pouted, "You mean we can't just take it to Dockmaster?"

"Dockmaster doesn't fix old rockets!" He said, fighting back the tears. He shivered and wiped the sweat from his brow with the back of his hand. He plugged the cables into a series of round wall sockets that ran along the bottom of the wall.

The woman watched him. She said, "We can't get rid of this ship, honey, it's part of our family. Lael was born here, your father was too, and we had our first..."

The speaker mounted on the ceiling above the dashboard crackled to life, and a calm voice said. "This is Dockmaster, Customer Service Division. Please give me your VIN?"

"Thank God!" He said. He leaned over and pressed the speaker button on the dashboard. "Twelve, nineteen, sixty-one, twenty-three, ninety-four D as in Delta, A as in Asparagus, seventy-one."

The speaker said, "Please stand by."

He quickly plugged the other end of the cables into the top of a chrome keg with 02 written in large red letters. He flipped the toggle on top of the barrel. The small light built into the switch started to flicker red.

The speakers clicked, and the voice returned. "This is Dockmaster. Your VIN is for a Titan-Session Six, is that correct?"

He stared at the speaker in the ceiling, trying not to hold his breath.

The speaker clicked. The voice said, “I'm sorry to inform you that we no longer service your model. We are, however, having a special on newer models, starting at an affordable twenty-five ninety-nine with a one hundred and fifty million mile limited warranty guarantee. A great value."

"I understand. We do offer an in-house loan program, starting at a low 30 percent interest."

He frowned. "I don't qualify for a loan." The ship rattled.

"I understand. We also accept collateral; property, intellectual or otherwise."

"All we have is this ship," The man said. He looked at his wife and child. "And each other."

"I understand. Have a good day."

He stared in disbelief at the speaker.

"We're going to die out here!" She said and began to sob. Their daughter was so terrified that she couldn't move.

The speakers crackled back to life, and a deep, husky voice said. "This is Hull. I will assist. Adjust your heading to Nine, Z-Zelda, Tiger-Fi, Duskatelle."

"It's a planet," He said, tapping on the keyboard built into the dashboard. "Cows, vagrants, and wide, open land. A real backwater world."

The woman smiled. "I like the sound of that!"

He turned a few dials and pressed a button. The computer calculated a series of numbers and displayed the total on a rectangular green screen mounted above the keyboard. He read it and let out a loud sigh. "It's nearby!" He typed out a command, and the rocket shivered as it adjusted course. He pressed the speaker button.

The thrusters suddenly came to life, and the rocket roared across the endless expanse of space. Moments later, a small yellow planet appeared in the distance. As they got closer, an L-shaped silhouette orbiting Duskatelle came into focus.

"There it is!" He said before the force knocked him and his family to the floor.

A ceiling panel fell and swung about overhead, hanging from a single bolt in the ceiling. Wires fell out and whipped about, their ends sparking and creating lingering vapors of smoke.

Bolts echoed throughout the hull like raindrops as they fell to the floor with loud thuds.

A fist-sized porthole on the back wall shattered, and air rushed loudly into space.

"Dear God, we're going to die!" The woman yelled, grabbing her daughter and holding her tightly.

The rocket lost control. It spun towards the L-shaped structure made of gray riveted steel. A set of giant cranes with Plexiglas-wrapped control carriages sat on a track on either end of the long side of the L. A large flat, round yellow hub protruded from the stubby end of the L, meant to dock larger ships. The faded Coalition of Forces "Flying F" insignia, a stretched italicized F with a small white star, was along the side of the structure with the words KATANGA BAY alongside it, in white stencil.

"No!" He yelled and repeatedly pressed the throttle on the dashboard's joystick.

The man did the only thing he could do; he quickly moved from the dashboard and held his wife and child tightly in his arms.

The rocket rocked hard and then... stopped moving. The wires overhead hung there and continued to spark, gray smoke filling the air with a sharp, stingy smell of burnt copper.

The air stopped rushing out of the broken porthole.

Lael looked out the round side window. One of Katanga Bay's cranes had a hold of the rocket. A panel below the crane slowly opened. The crane deposited the rocket inside. The panel made a loud clang as it closed. A loud decompressing hiss followed. The elevator deck the rocket sat on made a quiet whine as it slowly raised upwards.

The square emergency hatch on the side of the rocket blew open, and fresh air rushed inside. The family quickly pulled themselves out of the rocket, hacking and coughing and stumbled onto the deck.

Lael was the first to stand up. She looked upwards, into the bright spotlight beaming from above; her heart-shaped necklace reflected the light against its gold plating. She noticed someone standing above them, at the top of the shaft. They were short and hefty, wearing jean overalls, thick black boots, large electrical gloves and a banged up gray welder's mask with a black polarized square lens for a face. A white sticker ran along the top of the lens that said INVENIAM VIAM in black. In their right hand was a long stick that hissed sparks from its curved tip. In the left, a flat metal box with wires dangling from the bottom. As the deck reached the top, the sparks stopped and the rod fell silent and dark.

The person flipped their helmet up with the tip of the stick and stared down at them. She had bright green eyes, short raven-cut black hair, a small round nose, and thick lips, all on a sea of bronze flesh. The word HULL was stitched on the overalls just above the chest pocket.

"Blew your CAT," Hull said as she stepped down onto the deck and walked past them. She flipped the visor down.

"Compression Assignment Transformer," Hull said. She pressed the tip of the stick into the side of the rocket and pried off a smoldering box. She plugged in the wires from her box and welded her box on in its place. "These boxes don't just die out, they blow out. It's why they discontinued them.." She paused and thought about it.

"What, thirty years ago?"

"Why can you do it and Dockmaster can't?

Hull turned the torch off, flipped the visor and gave her a funny look. "Who says they can't?"

"I'm sure they'd say it's cost prohibitive," Hull said. "They're just trying to shuck and jive people out of their money on poorly made trash rockets if you ask me."

"That's right," Hull said. She glanced at the little girl before pulling out a cigar from her chest pocket and sliding it between her lips.

"How did you get that one?"

"I have a few I rebuilt and set aside. A lot of older rocket classes use them, and it's a pain in the back to rewire them to use the newer Direct Oxygen Generators. If you had a larger class of rocket, I'd plug it into the L section of this drydock and rewire the entire rig. I've seen too many issues come from these puppies, but you work with what you got, right?"

Lael said, "What does a composite drydock do?"

Hull grinned at the child. "Composite in the sense that it's not just a drydock. Katanga Bay is a self-sufficient, fully operational shop. It also has gear for die casting, machining, refinery and even has a full-service foundry below deck."

The man stared in shock, "You do all of that?"

Hull took out a chrome lighter and lit her cigar. "Pal, I've been fixing things since I could hold a wrench. If it can be made or broken, I can make it or fix it."

"It's a very faulty design," Hull said. "When they blow out, you either get an explosion that destroys the ship, electrical feedback that fries the circuits, a blown core that depletes the air supply and you end up suffocating from it..." She paused and took a puff from her cigar. "Or all the above. It depends."

Hull waved a hand. "It's fixed now. " She took the cigar out and held it between her fingers. "Should be good for another twenty to forty million miles. Flip the coil every five to seven million, and it should last." She rubbed her chin with the back of her gloved hand. "Now, as for payment..."

He stared weakly at her. "We don't have any money."

“That's okay. I don't accept money, anyway." Hull said. "What kind of skills do y'all have?"

He sighed deeply. " We're just a plain, simple family, ma'am. I didn't make it past fifth grade, but I can dig holes, fill holes and, well... manual labor, I guess. My little girl there, she's clever with making things with magnets and such, and the only constructive thing my wife is good at is making pies."

Hull took a drag from her cigar and exhaled a puff of gray smoke as she studied the woman. "What kind of pies?" 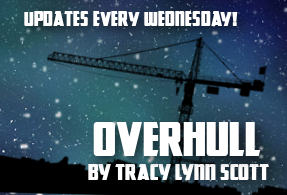 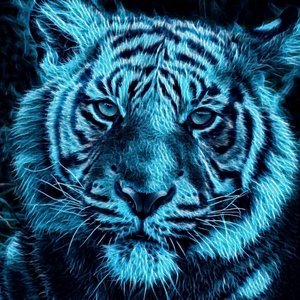 I hope you enjoy this story and subscribe for further chapters. I would love to hear what you think of Overhull and any crits you wish to offer I would greatly appreciate. Happy reading! 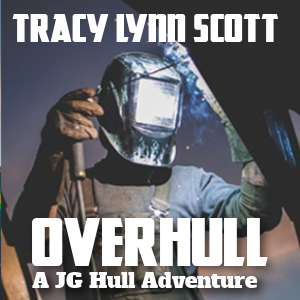 In a cash-strapped universe, the no-nonsense JG Hull finds her niche maintaining outdated ships for barter by using her skills, bare hands and her decommissioned drydock, the Katanga Bay. She is so successful that her business cuts deep into the profits of the shady Dockmaster, who holds a monopoly on shipbuilding and maintenance across the universe and will stop at nothing to put the one-woman show out of business, by hatching a series of plans they will soon regret. A new Chapter every Wednesday
Subscribe 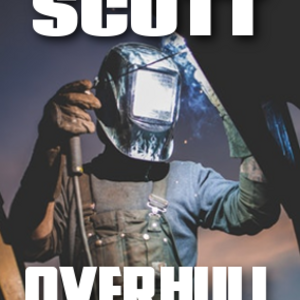