PULP: SURREAL STORIES FROM A NEARBY SKULL

Cancel Continue
this story was written as part of an audio-zine. if you'd rather *hear* these stories instead of reading them with your eyes, you can find them on Spotify! search 'SLEEPY BONES DETECTIVE AGENCY'!

WELCOME TO ‘TERMITE, MISSOURI’ WHERE THE TOWN MOTTO AIN’T AS GOOD AS THE NEIGHBOURS.

Over the course of three months, Termite had had just as many murders.

In September, it was the mayor, Daniel Spring (34). Sandra Bullock, no relation, found him in two pieces a short walk from Lēofsige Lake, in the wooded area behind the town hall whilst she was walking her saluki-greyhound at sun-up. Investigation proved inconclusive, put down to Missouri’s so-called “oft overlooked” black bear activity as the furred menaces geared up for their winter’s sleep. Seemed unlikely, with Termite being only forty miles out from Kansas City but suspicions were quelled for the most part, and the town’s council of two took the reigns.

In October, a bum by the name of Doc discovered Simone Verano (21) on the side of state highway ‘C’ as he was crossing on from Freeman, heading for Iowa at the pace of a slow crawl. Simone, and the remnants of her internal viscera, had been separated by about two-thousand paces with streaks of her red stretching all the way to the edge of town Excelsior gas station on East 227th street. Verano was the heiress of a succession of seven shopping malls across the states, an eighth of which intended to call Termite home by next January. Doc, after he was cleared of any and all suspicion, provided a testimony describing her pallid, lifeless corpse as having been ravaged by some kind of wild animal, only serving to corroborate September’s ursine assumption. Didn’t seem right for some; wasn’t likely Verano was heading anywhere by foot at the crack of dawn given all that lay ahead of her hollow gaze was a twelve-mile stretch of dead road to the defunct Dolan Township.

It was now November, and following suit was the death of Patricia Aki (26), co-owner of the Termite Lumber Company who, but two days ago, had announced an expansion on operations into two further sylvan zones; a three-hundred acre patch across interstate 49, as well as confirmation that the Lēofsige logging work required for the Verano Mall would be completed by Termite’s homegrown sawmill. Yesterday, they found her head clean-sheared off her torso amongst the timber on her land. As of this evening, they were dredging the pond on her land for the rest of her.

Suffice to say, it was a shocking turn of events for the quaint residents of this nine-square mile patch of turf and trees, given that the only prior case of first-degree murder in Termite had come on the eve of the twentieth century and, since then, they’d mostly stuck to petty larceny and drunk driving. Hell, the town of Termite didn’t even have a real police department. Just a Marshal, old Lee Dawson, who’d had to call in reinforcements from the next town over: Ass-End, Missouri, where the town motto is: “come for the sign, but don’t take it”.

Termite’s town council had finally laid down a curfew of eleven for residents, and eight for those under the age of eighteen, but that wasn’t going to do any good, was it? Three people had already died and, not only had they definitely been murdered, but they’d been well-and-truly slaughtered under the cover of nightfall. Specifically, and this had only been noticed by a few keen eyes, these attacks had happened only beneath a full moon: September 10th, October 9th, and November 8th.

One owner of such attentive peepers, sixteen-year old Daisy Nielson, even had a prime suspect in mind but she couldn’t exactly say for fear of… well, being laughed out of the room, mostly. She’d been watching, noticing, and, without any sort of evidence, had come to a conclusion all of her own. It just didn’t make sense, not really. What she really needed was a sounding board; thankfully, just the kind of service she needed was right around the corner in Ass-End. It, like all conveniences in life, came without her looking for it. Daisy was mid-taking her mind off the whole situation, switching off the local news, tuning out the worries, for otherwise she could not sleep. She was scrolling her way through a slew of thirty-second nothings on TipTop, seeking something funny.

Not a content creator herself, Daisy preferred to lurk and soak in the memes and the not-so-handy life hacks, remaining camera shy until the day came that the sun enveloped the earth. It was an hour from midnight on Wednesday; a school night, for which she would be rising and shining in only eight hours. Nevertheless, she was still scrolling as both the clock and calendar ticked over to tomorrow. It was exactly three-minutes past the stroke of zero when she came across the account in question: a troupe named C.R.O.C.S, a team of two travellers, traipsing up-and-down the fifty states out of order seeking the Bigfoot, and the Mothman, and the Jersey Devil for their 13.4 million fans. And, when they weren’t unsuccessfully seeking myths, the Cryptid Recovery or Capture Squad was spreading their influence by doing silly, looped dances at traditional tourist traps. They’d done ‘em all; the Birdman, outside of America’s very last Flockbuster fried chicken shop in Idaho, Nebraska, the Ding-Dong at the World’s Second Largest Non-Functional Pistachio Nut Cracker in Glenpool, Oklahoma, and now they were cutting the Swimmer not five miles from her own home, right beside the famous Ass-End road sign.

Over the course of an hour, Daisy tipped and tapped out a message for the monster squad. After agonizing over each and every word, googling synonyms, and ending up drenched in anxious sweat, the message read as follows:

I am sorry to bother you so late at night but I couldn’t help but notice your proximity to my hometown of Termite, Missouri. Our small community has been plagued by a series of killings which defy all logic. It is therefore, I believe, in your best interest to investigate what I believe, wholeheartedly, to be the work of a werewolf. Please let me know if you are able to fit my case into your busy schedule as soon as possible. If not, no worries.

Thank you very much for your time,

And, upon sending this ridiculously formal letter to their DMs, Daisy closed the app, locked her phone, and tossed it away before falling into a shallow, illucid sleep.

There's a werewolf racking up bodies in Termite, Missouri and Daisy Nielson is certain she knows who it is but she cannot investigate alone! 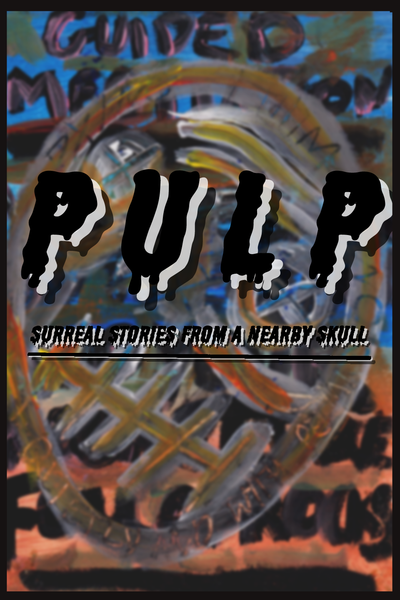 PULP: SURREAL STORIES FROM A NEARBY SKULL

PULP is an audio-zine series! Like this, but said out loud and with some sound effects to boot! If you'd rather *hear* these stories instead of reading them with your eyes, you can find them on Spotify! Search 'SLEEPY BONES DETECTIVE AGENCY'!

'PULP' is a series of short stories set in the same universe; telling tall tales of gods and horrors, detectives and witches, monsters and all-sorts. 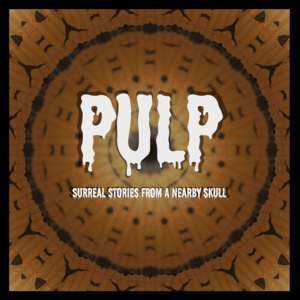