The Adventures of Rain & Salt

It was dark and empty for so long that I couldn’t count how many hours have passed. Not that it mattered. Death had always been so unkind and unjust to me. We met twice. The first time I saw him, he was riding a chariot engulfed in black tendril flames. Then he parked his vehicle in mid-air. Clothed in an ancient robe with golden lines, the faceless Death descended from a staircase of tar and acquired a human form, walking across the Earth in flesh.

From what I know, my foolish parents had fallen prey to his folly. They had taken Death’s bribe, gambling their lives in exchange for the instant recovery of my sickly state. That creature with his guile methods was never good at keeping his charming promises. They were all very tempting, believe me. Sometimes, I had the feeling that he did it for amusement. Death took both my father and mother away from me when I was six years old.

Our second encounter was very memorable because in that moment, Death was running after me.

I was destined to die sooner or later, but I had escaped his grasps. With his prideful nature, he could not accept this delay and he was growing impatient. What disturbed me the most was that he perceives himself as a perfect being! How do I know that? Well, he speaks to me frequently in my dreams.

Ranting to me about how he had tried to kill me over and over again and about how he had failed over and over again. Death was very furious with the fact that I could not die. He calls me that ‘expired human soul’ who’s still retained in her mortal case. But then the last time we spoke, he warned me of my fate: “Your soul will not dissolve by me –but by something else. Not by Death.” With a snap, he lifted the numbers (I assumed it was my expiry date) off my forehead. That was the last time we talked. Not once did he come to visit.

The silence in this void was sickening. My head was only filled with my words and thoughts. I was fully aware of my sleep. Something or someone was preventing me to rise from my slumber. Unable to make the slightest movements, I was a prisoner of my own body. I had been waiting for this day. Death was coming back for me. His talons were a few inches above my neck.

“Salt.” Has Death found me yet? Will this bed I lay on be my deathbed? My body failed to respond to this call. “Salt?” The speaker sounded uncertain of my identity, as if doubting himself. Death’s voice was slippery and cold, similar to piercing glass. It hurt to hear his talking. He had spoken in a tongue I do not recognize, yet I understood it effortlessly since I have been exposed to him for so long.

I remembered the words he had told me before he went to collect my parents. That day was a busy day for him. Death also had other human souls gathered around his arms. “You are very special.” He had said with a frown.

Listening closely, I hoped to hear more but instead the monotonous beeping sound of electrical machinery, followed by a soothing rhythm that went tap-tap-tap filled my senses.

My consciousness slowly began to resurface. I was hearing all kinds of things now. Even my sense of smell was starting to pick up the familiar odours that lingered about the air. It reeked of disinfectants. I disliked that scent very much. It reminded me of the days of my therapy due to the illness Death wished upon me. He was bitter. After taking my dearest ones, he took away my ability to walk.

Burst of stray lights entered my fragile eyes. Blinking rapidly, I could not see yet. It took me more than a moment to adjust to this blinding spray. I felt very, but I managed to sit upright.

I was contained in a room with one window. The walls were painted white, so were the ceilings, and the floor. I was lying on a bed, wearing a pearly dress with lacy sleeves and aquamarine-studded embroidery around my chest. Heap of blankets covered my disabled legs. A breathing mask had been attached on my face, tickling my nostrils. I took it off. I could breathe normally without having to wear that silly equipment. My back ached as I leaned forward and I let my face fall onto my palms.

I was back inside the hospital, the last place where I wanted to be.

This was impossible. How?

I stretched. It felt like waking from an eternal slumber.

When I realized I was not entirely alone in this spacious room, I was startled. I turned towards the moving presence and came face to face with a boy who was slightly older than me. He held such a strange expression on his face: curiosity. His hair was light champagne, and his almond-shaped eyes were twinkling like topaz. This boy looked so golden, except that there was something so dark about the way he looked at me. He was not giving out the shine you would expect him to.

On his hand, he was holding a book. It was entitled ‘How to Wake Up Girl in Comas’. The boy sighed and closed the book abruptly. In a blink of an eye, the book disappeared.

I gasped. Had I only imagined it? “Are you Death?” I blurted. It was the first thought that came across my mind. I know that question was absurd. I could have asked something similar to, ‘Are you a magician?’ instead.

His eyebrows furrowed, leaning closer. He was sitting next to my bed. “Did you just confuse me for Dr. Kettleroot?” The boy sounded offended.

“But I saw him. He had worn a black coat which was as fancy as the starry night. He brought a sniffing canine along with him to carry the other souls, for they looked heavy.”

“These matters are taken above. Death takes appearance on however he likes. A tree. A dog. It does not matter. Do you remember the funny incident when a man was eaten by a lion after falling in its den? Death was that lion. He was being creative, since the deadlines were fast approaching.” He explained. But then, those incidents are common in zoos, so I was not sure which incident he was referring to.

A cold harsh wind brushed past us. The window was closed. I shivered. When I looked at the boy who had not given me his name yet, the effect was different on him. His jaw was dropped open, a flash of agony across his eyes. His head was turned sideways as if he had received a slap from an invisible force.

“Hospital. How can I forget?” He reminded himself. Slowly, red finger prints began to glow faintly on his face. “Dr. Kettleroot hates being talked about.” The boy rolled his eyes, covering his cheek. He was ready to fend off another deathslap, I suppose. He looked so hurt and unhappy.

I could not help but giggle.

Then I found something more amusing than the discovery of Death’s true name, though I was uncertain if the source was credible. At first, I saw nothing. But as I looked closer, a small bell-shaped umbrella glistened over his head. The umbrella was a shimmer of swirling mist, opaque and red. His hand was wrapped around the silver handle. But that was not what surprised me, what took me further was the shower of rain magically pouring around the boy, only within his radius. His surroundings were unaffected. No wonder why he seemed so gloomy.

There was excess rain bouncing off the umbrella which had reached me but I did not get wet. Believe me or not, even the ground was dry beneath his feet. “Why is it raining on you? Where does it come from?” My question would not make sense to anyone who had not seen how ridiculous his situation was. “Does the sky have a grudge upon you that it curses you even when you’re indoors?” I looked at him full of curiosity.

“Indeed. There are things, of course, that you are not aware of.” He stood plainly tall and introduced himself properly to me, extending a hand. I noticed that he had been wearing separate cuffs on each of his wrists, bands of silver. “I am Rain and that is the farthest thing you will know about me.”

I shook it gently. “Rain, what an odd name.”

“Isn’t Salt twice as odd as mine?” He grinned. “Come with me. You do not belong in this world any longer.”

“Why does a person like you even know that?” I asked warily.

“Because you can understand me.” Rain said.

I shook my head in bewilderment.

“This is not the humans’ common tongue.” He was serious. Then I realized, this entire time, he was speaking in the same language Death had spoken and I was just as fluent like them.

Rain grabbed me, pulling me out of bed. “Wait, do not be so careless! I cannot-” My voice trailed off.

The hair on my arm stood up. My eyes widened and when I looked up at the boy, he had a huge smile on his face.

For the first time, my legs did not fail me. 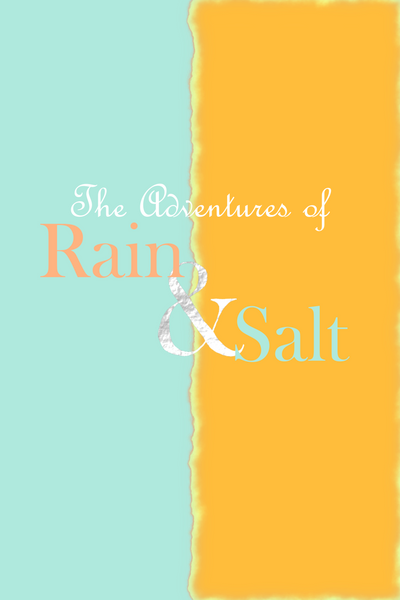 The Adventures of Rain & Salt

A young girl named Salt is guided by a mysterious cursed boy towards the after life.
In their journey, they plunge into a whole new realm of unseen wonders, exploring the adventures presented by Death himself.
Subscribe 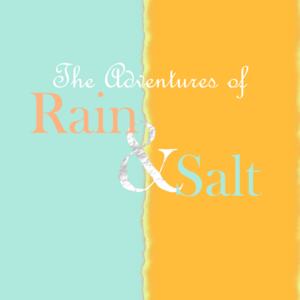