Foul air clung to the town like a pestilent blanket. The breeze had died days earlier, leaving the inland provinces to suffer in sweltering, stagnant heat. A thick silence reigned. Even the animals had fled. Nothing moved but for a few wisps of smoke rising from smoldering ruins.

Valory bar Adrianth picked his way down a side street, sun beating on his shoulders as he searched a row of houses for survivors. Fire had ravaged many of them. Walls were scorched, roofs caved in, and the smell — the smell alone would churn even the most hardened of stomachs. He had spent the morning with a kerchief tied around his nose and mouth, though it still took all of his willpower not to gag.

Approaching yet another fire-blackened doorway, he paused as his eyes fell upon a pair of nails driven into the frame. His boots traced patterns in ash as he moved about the stoop, fingers snagging on several more pairs of nails hammered into the other side. A frown tugged at his lips. He wondered whether, in his rush to clear through each of the houses, he had missed other such details. Then again, perhaps such details were lost. Most of the buildings suffered far worse fates than this one. Fire hadn’t ravaged it as thoroughly as its neighbors.

He froze just inside the threshold as his eyes fell upon the twisted corpses that lay before him. Taking a long breath, he swallowed down a rush of nauseous horror. These weren’t the first bodies he had encountered that morning, nor would they be the last.

A second look revealed that the house once had four occupants: a small family. They lay huddled together on the floor where they had retreated when the smoke became too thick to bear. Valory paced a circle around the bodies, examining their positions and returning to the front door. From what he had seen that morning, most of the townspeople had perished in bed, unaware of the attack unfolding around them. The rest, however, he always encountered in the front room. At first he assumed they went to sleep and never woke when the fires started. The scene in this house gave him pause, however. This family should have made it across the threshold into open air.

Unless someone had nailed a bar across their door, preventing them from making an escape. Valory grit his teeth. This was arson. He no longer had any doubt.

The crunch of charcoal beneath booted feet sent Valory whirling, sword half out of his scabbard by the time he faced the hulking man ducking into the room beside him. He relaxed at the sight of Little’s familiar form.

“Been looking for you for ages,” Little boomed. “What are you—” He broke off at the sight of the bodies on the floor, ruddy face going ashen. A shaky hand pressed two fingers to his brow.

Valory echoed the gesture, a whispered prayer passing through his lips. He brushed past Little, squeezing through the door and over the stoop to the street where he stopped, swallowing against the tightness in his chest. Head tipped back, he stared unseeing up at the cloudless sky.

“This was no accident,” he said. “Someone burned Lannoch.”

“S’what we thought, too. The others are by the square. We may have found something.”

Valory looked back towards the ruined house where Little still stood. “Found what?”

“A body that doesn’t belong here.”

Looking for more stuff to read? I post exclusive novels, short stories, NSFW scenes, art, and more on Patreon! For a closer look at benefits I offer (along with free samples!), check out the link in the description! 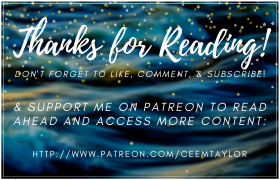 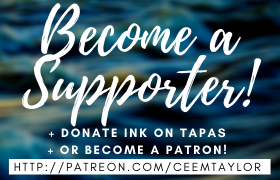 Support the series, read (way!) ahead, and check out the benefits I offer to patrons right here --> https://www.patreon.com/posts/49467456

Holy Shit, CeeM, you had me with the first sentence, the picture that entered my mind after reading it was intense.
The rest of the chapter just confirmed I'm here for the long haul. 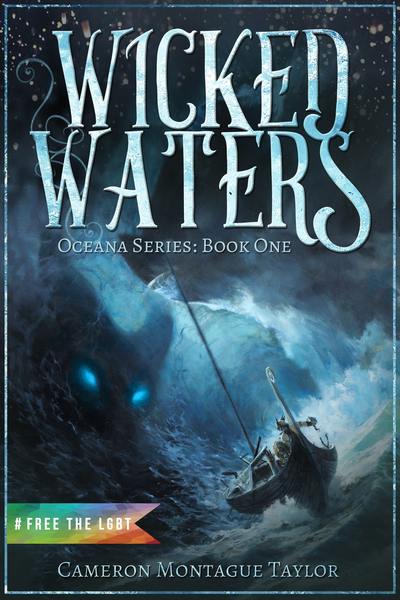 A dark foe. A forbidden love. A deadly, high-seas quest.

Mercenary sailor Jack's past comes back to haunt him when his crew receives a commission during the height of hurricane season. Charged with returning the all-too-familiar Prince Valory to the capital by way of the isles, Jack and schooner Windjammer battle storms and sea-monsters alike in Oceana's treacherous waters.

Jack's new patron, however, is no ordinary nobleman. A hardened soldier and powerful commander, Valory boards Windjammer to scour the isles for signs of the mysterious new threat at Oceana's borders: an evil that burns innocents alive and smashes ships to pieces.

Yet Jack isn't without secrets of his own -- secrets that unravel under the growing intensity of his forbidden attraction to his patron. Forced to reclaim his lost title, Jack comes face-to-face with the past he thought he'd outrun. As Windjammer races to defend Oceana from invasion, he and Valory must work together to untangle the threads of the dark alliance threatening their home, crew, and kingdom -- or risk losing everything in the process.

*What to expect from Wicked Waters:* 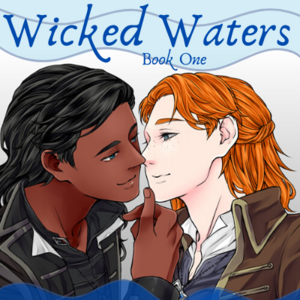