Jaala pulled off his helmet and turned to the house beside him. A two-story log cabin style house dazzled at the end of a long driveway. Grand and imposing. Bushes and trees bloomed around it, adding to the bought glory. Jaala grinned.

“You seem pleased with yourself,” Baazo said.

“Of course I am; I’m about to add another signature to my winning streak,” Jaala replied.

Baazo turned up his nose. “Arrogance bites demons too, you know.”

He stuck out his fire salamander tongue. The red line running along his back lit up into orange flames against his black body. Jaala chuckled and rubbed his familiar’s head with his fingers before Baazo ran up Jaala’s arm, settling on his master’s shoulder. Jaala left his helmet on his motorcycle and walked to the house, boots clicking on the cement. A wave of trees were the closest neighbors to the house; mountains hovered in the distance.

The sun began to set, casting an almost romantic feel to the area. Not that Jaala cared about that, but he didn’t deny that it proved useful in the past. Humans were emotional creatures, after all. All too eager to act on implosion when presented with something too good to be true. Especially if it made their lives easier. He rang the doorbell and adjusted his leather jacket. A tuft of black hair that fell into his face. No matter how many years went by, he never quite got used to his human form. His horns were convenient for keeping his hair out of his eyes. Not to mention, they made an impression. The door cracked open. A pale green eye stared back at him through thick-rimmed glasses.

“What do you want, demon?” the man sneered.

“We have business to finish, Francis.”

Jaala raised an eyebrow. Francis wore a fluffy white robe, loose enough to expose his chest – so pasty, the robe struggled to compete.

“I said I’m busy.” Francis swallowed and squared himself. “And this is my house, so you’re not coming in.” Placing his palm on the door, Jaala rolled his eyes, and pushed. “W-Wait, what are you doing?”

Francis put his weight against the wood to stop Jaala’s unwelcomed entrance. Even if Francis had some more height and muscle on him, he wouldn’t have been able to physically stop a demon. The house was one of an overly accomplished hunter. Stuffed animals and various weapons covered every inch of the place. No way Francis knew anything about guns, much less killing a lion or a rhino. I guess if you’re going to overcompensate, you might as well go all out.

“Can we hurry this up?” Francis asked, tying his robe around his small swim trunks. “I have guests waiting for me.”

Jaala pulled out a small black notebook and unhooked a pen from the binding. “Just sign, and I’ll be out of here.” He held out the pen to Francis, who chewed on his lip.

“Couldn’t I give you something other than my soul?” Francis asked timidly.

“What else do you have to offer?”

Francis paused and paced around the room. His face lit up, and he spread his arms wide. “What about all of this? You could live like a king! The women will flock to you.”

“First of all,” Jaala rubbed his eyes, “I gave you the coin that granted you all this wealth. If I wanted it, I would have used the coin myself. Second, look at me. I have no problems with women or anyone flocking to me. Your soul is the price. The only price.”

“Why? What’s so special about my soul?”

“Probably nothing. The price is a soul, regardless of the quality.”

“Above my pay grade,” Jaala said. “All you have to do is sign. We’ll be done, and you can continue filling your life with boobs and money.”

“But why should I give up my soul? It’s important, isn’t it? Why would I have it, then?”

Jaala shrugged. “You have an appendix, and that’s not important.”

“I got my appendix removed,” Francis said.

“But doesn’t,” Francis pointed to the roof, “You Know Who care?”

“Again, above my pay grade.” Jaala held out the book, flipping it open to a random page. “No point in delaying the inevitable.”

Jaala closed his human grey eyes. When he opened them, they were slit like a cat, glowing a fiery orange. He raised his hand. A large gold coin shined between his fingers.

“How did you get that?!” Francis demanded. “I hid that away and sealed it with a spell!”

“Oh my, a spell. Did you find it on the internet?”

Jaal stepped forward, holding the coin in front of him. “Listen. You summoned me because you wanted a better life, right? Why hesitate? Why pass up the chance to show all those who turned their nose up at you who the real winner is? Do you want to spend another day hunched over a computer while everyone calls you a loser? Prove them wrong, Francis. All it takes is a signature, and you’ll never see me again. Everyone will think you won the lottery, and the money will keep coming, assuming you don’t lose the coin.”

Jaala opened the book again and held up the pen. Francis snatched it and scribbled his name, then squeezed his eyes closed and clenched his fists.

“What are you doing?” Jaala asked.

“I’m waiting for you to take my soul.”

“Me? Who do I look like, the Grim Reaper? Your soul isn’t going anywhere until you die.”

With his job done, Jaala gave a final wave to Francis and walked out the door. Once outside, he opened the book. The signature seeped into the paper, ready for a new one. His satisfied smile dropped. An oafish demon leaned against his motorcycle. His bulky body screamed too much practice with handing out punishment and pain. A broken horn on his bald head said he received some punishment also.

“Hey! Get off my bike, you heathen,” Jaala said.

“Spare me. You have a summons.”

“Why do you have it? It should have come directly to me.”

“How should I know? The geeks downstairs said something went wrong and to give to the closest signature collector I found. That’s you.”

Jaala didn’t know the demon personally, and he didn’t want to. He smelled of blood and rusted iron. The demon slapped down the paper on the motorcycle seat with a wet smack and vanished. Jaala’s mouth opened in silent horror. A drenched piece of paper lay on his pristine leather seat, leaking a pungent smell of alcohol.

“What fresh hell is this?” He picked up the paper, trying to read the soaked writing. “Pipelow? Pibar? I hate drunk summons. This looks like a nerd tried to come up with a D&D character.”

“Something went very wrong,” Baazo pondered, “It couldn’t be a summoning circle. Otherwise, you’d be summoned directly to it.”

“Probably some backwoods spell. Well, hopefully, you can get a scent off this. We probably won’t be able to read this even when it dries.”

It took over two hours of going down street after street, house after house before Baazo picked up what he thought might be the scent of the summoner. Baazo’s flame waved full force the entire time, his tongue darting in and out. They first stopped at a house addressed to a Piao Barns, but the man shut the door in their face. At another stop, a woman named Pippa Lowes said she didn’t know anything about summoning a demon, but she knew how to summon what was in his pants. Jaala might have taken her up on her offer, but the smell of stale cigarettes and desperation made him pass. They didn’t get the name of the human at their third stop. An old woman with a cane threatened them with a cross and exorcism before reaching the first step of the porch.

Jaala stopped his bike at the fourth house. “If this isn’t it, we’re calling it a day.”

Baazo yawned, curling up on Jaala’s shoulder. This house had a more modern feel to it. Full windows and clean edges. No frill or gaudy accents. He knocked on the door, running his hands through his hair again. Appearance was half the battle and one where he had the advantage. No one answered; he knocked again. There was a loud bang and the patter of feet coming towards him. The door swung open. Jaala spotted dark orange curls before the women let out a sound that seemed like a mix between a squeak and a scream before the door slammed shut.

Jaala knocked on the door again. This time it cracked open, revealing part of the woman’s face. Honey brown eyes looked at him over a splash of freckles.

“Did you, by chance, try to summon a demon tonight?”

DC has a playlist on Spotify! Check it out! If you have any recommendations, I might add it to the list. :)

I WOULD DIE FOR JAALA 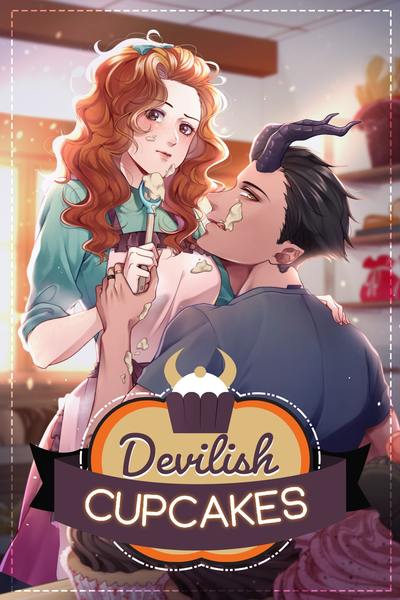 Piper worked hard to finish culinary school and dreams of owning her own pastry shop. But she has a problem. She’s a disaster in the kitchen and no one will hire her. Desperate and drunk, Piper resorts to summoning a demon. When the demon, Jaala, offers to make her dreams come true, she suddenly refuses.

Jaala has never been told no before but is up to the challenge. Determined not to lose a potential soul, Jaala sticks around to convince Piper she would be better off taking the deal. As they grow closer to each other, they both ask themselves: Can there be love between a human and a demon?
Subscribe 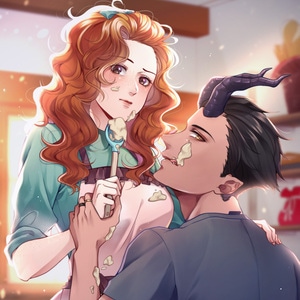