Nora was in darkness. The void she inhabited was silent, except for her controlled breaths. A breeze, gentle and calm, blew against her, tickling her skin and brushing the dark hair from her face. Her eyes opened.

Singing birds and tapping wood swept over the silence. She stood in a courtyard, her bare feet planted firmly on the soil. In her hands she gripped the hard handle of a bokken, a wooden sword. The wind grew stronger, rushing against her white hakama trousers. She stared at the young man before her.

Yukimura whirled his own bokken, a grin upon his lips. His eyes, blue as the raging seas, flashed with confidence, and his blonde hair shone in the sun like gold. He wore robes similar to Nora’s, for they were both apprentices of the Master.

Surrounding the two students were the towering bamboo trees of the nearby forest, as well as a large house, the home of the Master and his students. Sitting outside, on the wooden deck before the sliding paper shojidoors, were three other apprentices, all of them in their late teens.

One was Senya, who sat on her knees, dipping a quill into an inkwell, preparing to scribble notes on a scroll. The youngest of the apprentices, she loved to study the fighting styles of her peers, especially Yukimura and Nora.

“Don’t blink, Senya,” Yukimura said, holding his weapon before him. “I’m going to end this in a flash.”

“It’s usually pretty close, isn’t it?” Akira, another apprentice, stood next to Senya, his arms folded over his chest as he spectated the duel. His dark eyes went to Jiro, the third student, an overweight boy who sat munching on almonds from a jar. “Jiro, who do you think will win?”

Akira nodded, stepping off the deck and onto the dirt. He sauntered to the battlefield and looked to Yukimura, who nodded that he was ready. He then looked to Nora, who also nodded. The judge retreated a few steps and exhaled. “Begin.”

Nora’s weight shifted to her front foot and she lunged forward, her sword piercing the air with frightening speed. The bokken was simply wood, but the velocity of her jab was strong enough to punch a hole through most opponents. However, Yukimura spun around the fierce strike, rotating his body in a perfectly timed twirl.

Still grinning, the young man ripped his bokken in a sideways slash that cut at his opponent’s throat. Nora grunted, now leaning backwards. She tilted her head back as the sword sliced only an inch from her neck. Her eyes flickered to Yukimura and saw that he was still rotating, like a hurricane, and his weapon came rushing in the same direction. This time it came at Nora’s stomach.

Nora threw herself backwards, striking the ground with her back, dodging Yukimura’s sweeping slash. Rocking herself forward, she quickly flipped back to her feet and brought her bokken crashing down upon her surprised foe.

Yukimura grunted, his weapon meeting Nora’s, pressing his palm against the wooden blade as support. He winced as his hand went numb.

Nora’s blade scraped across her opponent’s and then came slashing back at Yukimura’s ribs. To her surprise, Yukimura’s bokken flashed to the side with blinding speed, swatting away her strike. In the brief millisecond that their weapons clashed, their eyes met. There was no better form of communication. You are a worthy opponent.

Yukimura’s blade flashed forth like lightning, driving straight into Nora’s diaphragm. The girl’s eyes bulged and she doubled over, the air forced from her lungs. She fell to a knee, coughing and sputtering. Her eyes widened when she saw the tip of her foe’s bokken pointed down at her. She glanced up at her triumphant opponent, who smirked, beckoning for her submission.

Nora exhaled deeply and grasped her bruised stomach. She slowly stood and held up her bandaged fists.

Yukimura raised his eyebrows in amusement. He tossed his bokken to the ground. “Fine, have it your way.” He cracked his neck and held up his fists, spreading his legs as he shifted into a fighting stance.

“She doesn’t know when to give up, huh?” Akira let out a long sigh as he watched the two combatants engaged in hand-to-hand Taijutsu. He grimaced at the thumping sounds of fists striking flesh. “No one can beat Yukimura in martial arts.”

Senya scribbled wildly on her scroll, her eyes twinkling with fascination as she watched the sparring.

“Didn’t Takeshi beat Yukimura unarmed once?” Jiro turned his container of nuts upside down, groaning with dismay when he realized it was empty.

“Where is Takeshi? I want to see him in action! He never spars,” Senya exclaimed, tearing her eyes from Nora’s battle.

“He’s probably napping somewhere. When is he not sleeping?” Jiro shrugged and got up, holding his empty jar in one hand. “I’m hungry. I’ll be right back.”

Akira narrowed his eyes at Jiro as the large boy thumped away. “We just had breakfast. Where does all that food go?”

“To another realm, maybe.” Senya giggled.

“Maybe.” Akira smiled and turned his attention back to the duel. “Oh, she’s done for.”

Nora struck at Yukimura’s face with a flurry of fast punches, but the boy blocked each jab with his elbows. Pulling back her blistered fists, Nora shook her aching hands, which burned as if she’d just dipped them in fire. Her face contorted with frustration. This wasn’t over.

She rotated her body, swinging her heel at Yukimura’s temple. But once again, Yukimura was prepared. He blocked her kick with his forearm while simultaneously kicking out her other leg, causing her to fall backwards.

Losing her foothold, Nora fell, parallel with the ground. Grunting, she brought both of her arms backwards to support her fall. She clamped her legs inward at Yukimura, like scissors, striking him from both directions.

Yukimura’s eyes gleamed with victory as he brought both his arms upward, easily halting her kicks. He then shifted his weight forward and slammed Nora in the stomach with his palms, forcing her to the ground. Wiping sweat from his brow, he beamed victoriously. “Another win for me.”

Senya applauded excitedly. “That was such a great duel!”

Yukimura brushed his curly hair from his eyes, trying too hard to look placid. “Akira, will you spar with me next?”

Akira raised an eyebrow. “Are you sure? Your forearms are bruised; you might want to take a break.”

Yukimura sighed, lowering his head and rubbing his aching arms. “Ha, you see everything, don’t you, Akira?”

“Why do his arms hurt?” Senya asked.

Akira sauntered to Nora, who was still lying on the ground, panting. “He didn’t fight Nora correctly. Sure, blocking blows is important when engaging in hand-to-hand combat. But Nora hits like a bull; you can’t stop her attacks without taking some damage yourself.”

Yukimura scowled at Akira over his shoulder. “And I’m expected to dodge everything?”

“No, but that’s what makes Nora a formidable opponent,” Akira said, extending his hand to his fallen friend. “No matter how much you boast that defeating her was easy, you can’t avoid the truth. She’s dangerous.”

Nora glared at Akira’s hand and pushed herself to her feet, ignoring the boy’s assistance. She turned away and stormed off into the bamboo forest.

“Someone has to go after her,” Senya said.

Akira groaned and started after Nora. “What a pain.”

Hello, thanks for reading "Nora!" I've worked on this book for many years and I'm excited to bring this epic story to you. Let me know what characters are catching your eye/interest in the comments! And please, if you enjoy the series, like and subscribe to support! Any ink is also appreciated! :)

I have been waiting for this novel so much I am so excited and looks really nice. 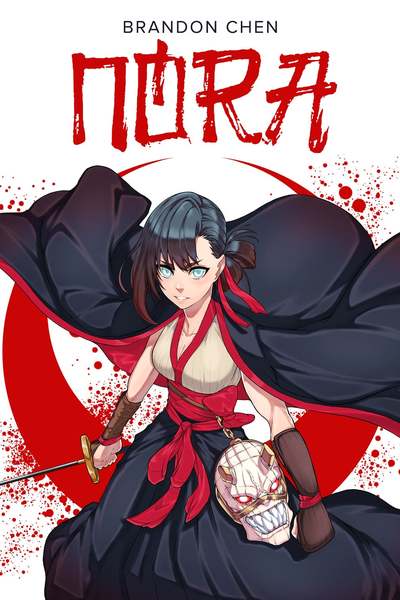 Nora is among seven children, saved from the ocean by a great turtle and a man they call the Master. The Master raised and trained the children, teaching them to master the way of the samurai. They become unrivaled warriors, demonstrating such talent that they drew the eyes of the gods.

The King of the Oni has perished and his sons are eager to steer the demons down a new path, to conquer mankind. Nora and her family will find themselves trapped in a waging war among humanity, Oni, and all in between. 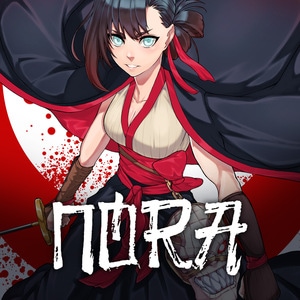