At the tail end of a particularly traumatic summer, I woke up with a weird pain in my face. I went on one of my most frequent websites, 3WMB, and looked up my symptoms. It stood for What’s Wrong With My Body, a website for learning about every disease imaginable. I had a page bookmarked earlier in the year about my thing. The website politely told me that morning that the sharp pains I was feeling could be fatal.

They knew I was a Cani as long as I could remember. Stella was one too, so they figured I’d have the same Cani sign as her, long fang teeth that I couldn’t decide looked more like vampire teeth or werewolf teeth. In fourth grade, I received a very informative book in You Are Not a Vampire: It’s Close (Kinda) Being a Cani But it’s Different, and the less informative sequel You Are Also Not a Werewolf: While as a Cani You Technically You Share Beast Like Qualities Similar to Werewolves, but There are Also Numerous Differences Which are Detailed Within. They had a time map they’d regularly update with their predictions on when my Cani sign would show up. The map was saying any day now. Which I thought would make me feel better, but after reading some horror stories about Cani dying immediately upon their official awakening or whatever, I was in a haze of anxiousness.

Looking up all the possible reasons I could imminently meet my demise had become part of my morning routine. My usual next step after looking up Cani fang arrival on 3WMB was to worry about it for an hour, then actually get up and get ready. I had a busy day, so I cut my lie in bed worry time in half and split it with my worry over breakfast time.

I was also practicing not thinking about my particularly traumatic summer and why it was particularly traumatic. In trying not to think about it, I felt the whispering thoughts start to creep in. I hoped shouting “PIZZA” in my head over and over would drown those out. I headed to the kitchen to swipe some leftover pizza from dinner the night before. I unwrapped the foil around the leftover fridge pizza and tossed it in the microwave as the pain hit again. It was like a sharp pain around my jaw. It seemed to get worse the more I ate. I was at a crossroads of worry; think about the jaw pain or think about the particularly traumatic summer. The pizza had betrayed me by not blocking out either.

My sister Stella was still asleep after I finished breakfast, so I could begin my busy plan for the day without her making fun of me. Or playing that stupid twangy radio station she played every morning as soon as she woke up. Full of pizza and worry, I started my practice run of high school mornings. I figured if I could just make it through this morning routine regularly, I would be OK to start school.

Step one, brush hair. I had a very specific brush pattern to keep my hair in check. It went brush, double brush, brush, double brush, triple brush, double brush. I had practiced long enough to brush my hair the exact way Raina Starlight had hers. With bedhead thoroughly defeated I felt like I could be the new princess of Staverius Academy. I don’t know if princess of Staverius Academy was a thing, but Stella went there, and she said she won it, but I wasn’t sure if she was joking or just lying or something. She also said Staverius had a zoo past its boiler room that only had pink cougars and I’m pretty sure that one was a lie.

Step two, brush teeth. Brushing teeth did not go as well. While yes, I did have my Sparkly Diamond Sunbeam Raspberry toothpaste that looked like it was made by an enchanted unicorn dentist, my teeth flared every stroke of the toothbrush. I decided to practice uniforms instead of practicing more good dental hygiene if it was gonna hurt that bad. Feeling good in my new uniform would help me fight against the growing worry of my face hurting really weirdly every few minutes.

The looming thought of summer was like a jerk in the back of my mental room yelling out spoilers of a movie I was looking forward to. Like of course I could try to block out the spoiler, but now my imagination was going, having me wondering how the character dies that just got screamed at me. But instead of an annoying spoiler to something I wanted to see, the mental jerk in the back corner was whispering thoughts and ideas that could have led me to think about the things I didn’t want to think about.

I had been saving the unboxing of my uniforms for today, so I’d have something to look forward to. I opened the box and saw lots and lots of gray fabric. Gray…could be fine? It could maybe make my hair clips or nails pop more if I went full colorful with them? I wouldn’t know unless I tried them on, so I got to work tearing off the plastic wrap around each part. The jacket looked like a prison outfit if prisoners needed to hold like forty things in individual pockets. I would have been fine with like four pockets. Next was a plain button-down shirt. Also gray. The same shade of gray too, for some reason, like they were the default clothes color and they forgot to uncheck default. I saw a plaid cloth and figured that was the skirt. A skirt could save this, right? I unfurled it like a treasured flag but no. Not a skirt. It was an official Staverius Oils and Soils Removal Rag. And to cap things off, the uniform had pants. The same shade of gray. Thirty pockets. They were more pocket than pant. In the box, there were about five more sets and they were all the same thing. To add insult to injury, there was a note at the bottom of the box that said “Staverius Academy frowns upon any accessories, such as hair clips, wristbands, necklaces, earrings, and painted nails.”

Maybe it wouldn’t be as bad once I tried them all on. I got dressed thinking it was a far cry from the good-looking skirt/shirt/accessories combo from the brochures Staverius Academy had given me, and it got me off my morning readiness game. Not even like a for real morning readiness mind you, but a pretend get ready in the morning on a day where I didn’t even have to be anywhere. I could have slept in. Even my Raina Starlight poster above my bed looked disappointed in me.

I flopped back onto my bed under the Raina poster. Raina Starlight was my hero. There were a bunch of stories and movies and shows about her going on adventures and stuff, she was the coolest person I’d ever heard about, and bonus, she was a Cani too. If I could even be a little like her at Staverius, maybe the gray, gray, gray, gray, and pockets uniform wouldn’t be so bad. Also she played the best character in the best TV show, Tower of Hate and Love.

I made it. I made it a whole morning without directly thinking about Jeans. In realizing that moment of false triumph, I did start thinking about Jeans. Not the pants, because unless it was a really REALLY bad pair, the pants wouldn’t make me instantly start bawling. It was the farthest I made it into trying a routine morning the last few months without crying thinking about her, but that felt like a hollow victory when I had to bury my head under pillows just to not see the spots I thought I had scrubbed clean of memories of her.

How could I possibly start at a new school like this? I was riding at light speed towards getting branded the weird crying girl my first day of class.

“But summer ended. It rained the day it ended. And I was alone again.”

A drop of water landed on my nose. I looked up at the ceiling to see if there was a leak. Then my ceiling started raining. I sat up in the instant indoor downpour, which then vanished like all the water had evaporated. I felt as foggy as my room looked for a second. Was this real? This was a dream, right?

I stood up and tried to think of ways I could tell something was a dream. The pain in my mouth flared, worse than it had ever flared. Then a giant bolt of electricity ran through my hands and I naturally freaked out and fell over awkwardly. I was on the ground with my hands covering my mouth. I could feel the crackling lightning stop as my room cleared up. I instinctively touched my tongue to the sharp eye teeth. In just an instant they’d grown out. 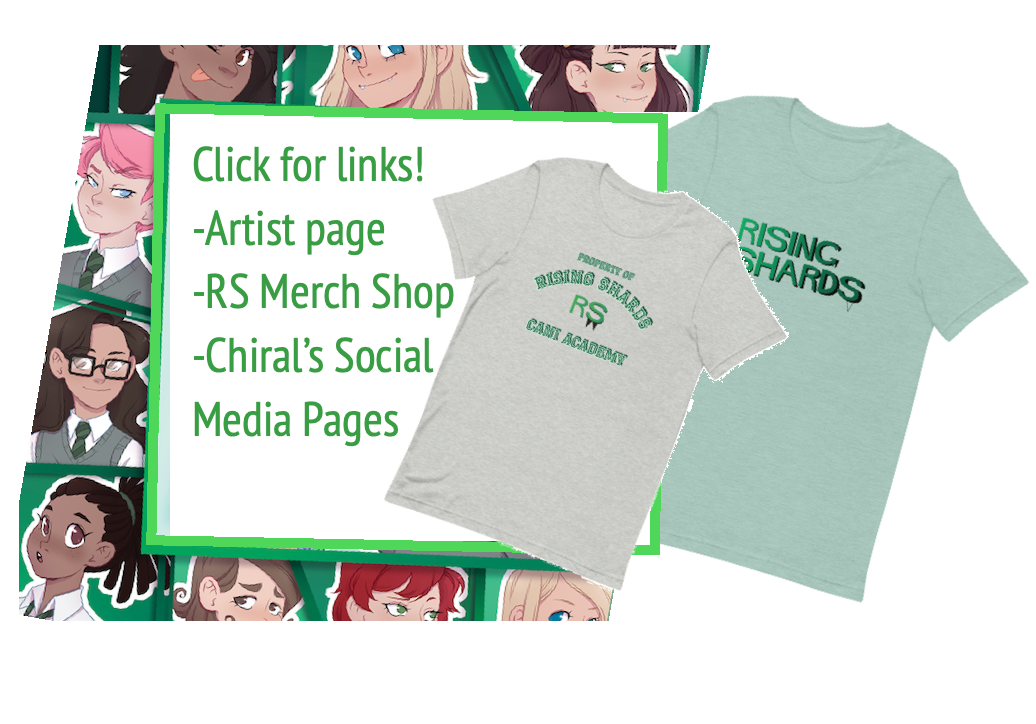 In the series premiere, Zeta Faleur has to deal with the consequences of being a Cani.

New chapters will be posted Tuesdays and Thursdays! 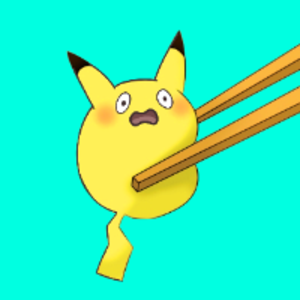 When Zeta Faleur suddenly grows fangs and creates a literal thunderstorm in her room, it can only mean one thing: She's a Cani. At Rising Shards, a Cani boarding school, she meets Oka Ohri, a kind hearted girl who she forms an immediate bond with.

Fresh out of ending a very bad relationship, Zeta isn't sure she's ready for her blossoming feelings for Oka, but as she works through those, she also must learn how to use a bloodsaber, fight monsters, fulfill requirements for a complicated scholarship, make new friends and new enemies, as well as keep up with all the other oddities in Cani life, she also has to learn if she's ready to move on from her sad past with her ex on her way to a potentially happier future with her crush.

UPDATE SCHEDULE: Main chapters are uploaded Tuesdays, Thursdays, and Fridays, with one Saturday a month for Chumbler chapters. Bonus chapters will be uploaded at intermittent times for holidays, Tapas events, just when I feel like it, etc.

3 Volumes (1 Season or a complete story arc) are finished so far with lots more on the way!
Subscribe 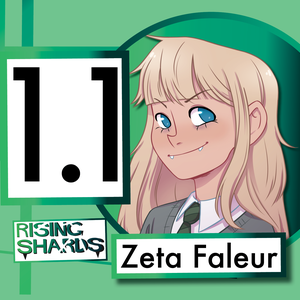