That sunny day came to an end when at dusk the sky turned dark and it began to rain followed by thunder and lightning, the wind was blowing furiously and the clouds were forming whirlwinds about to become hurricanes that  wanted to destroy everything. A child cried when he was barely a year old, his mother comforted him in his arms and told him that everything would be fine. His father, the goblin Qin Dun came in desperate shouting:

—Qin Dun: Qin Qin he is here! there is no time he is coming for us, if we keep hiding the forest will be destroyed and our son…. "

Her mother felt a huge pain in her chest as if she was predicting what might happen, she grabbed her child and made a mark on his forehead with her own blood.

—Qin Qin: With this your powers will be sealed until you are old enough to bear this burden my little one, until then just live your life, I am sorry to not accompany you on your adventures but we will be with you wherever you go.

Mr. Dun hugged the boy tightly and made a movement with his hand that made him fall asleep immediately with tears about to come out of his yellow eyes, he told Mrs. Qin to run to the old woman.

The father made hand movements again as if he were casting a very complicated spell, Mrs. Qin left through the back door of the hut in the direction of the forest. After a while running she came across a small house and out of it came an old goblin, the old woman Lin. As soon as she saw her, she gave  her son; The old woman immediately understood what was going on just by looking at Lady Qin's expression. The old woman went into her little house and placed the child in the middle of the floor, then around him she made a circle and drew some characters in the ancient language of the goblins, she took a pot full of stones of different colors and a handful of flowers that she had in a basket and threw it all around that circle. She sat with the child in her arms and began to cast a spell.

"Elder Lin: Legendary and ancestral goblins I make a request to protect this weak creature from evil that awaits him without mercy until the storm passes and the sun shines again." She pronounced in her language.

Around the circle a mini blizzard rose and the stones and flowers transformed into branches that came out of nowhere and formed a small igloo around the old woman and the child. Those branches formed a flexible trunk of quebracho wood, the strongest of all, it was impossible to penetrate from the outside. By then, Mrs. Qin had already reached her husband to help. She came practically out of breath and drenched in the rain, she saw a figure in front of her husband and shouted:

"Lord Dun, are you never going to give up Hei Hua?" you've been chasing us for millions of years, what makes you think our powers will be yours ?!

That “human” being called Lian Hei Hua floated in the air, he was tall and quite handsome, his curly black hair shone with the light of lightning, on his forehead he had a mark, a circle and a smaller one inside it, that mark identified him as someone from the wrong side of the Hunluan De Heian Clan. He had golden eyes, a cold gaze, and a sideways smile that gave chills.

—Lian Hei Hua: HAHAHAHA ohh old Qin Dun, I have a lot of energy! Enough to haunt you for a few more years but yeah, you're right I've gotten tired of chasing the two of you everywhere, so this time not only will I get your powers at last but I'll also let you rest for a long time. That way we won't have to play cat and mouse again! right?

Hei hua moved his hands quickly and a huge blizzard swayed over the couple, the two fell to the ground but immediately got up and moved their hands in unison and from the ground giant branches grew that were entangled in Hei Hua's legs. He was quiet, after a while those branches froze and broke into pieces. Someone was among the trees behind from afar you could feel the cold ... the couple looked at the trees in which a figure was accentuated, and they saw a woman completely dressed in white walking calmly towards them, she had cold eyes pulling to gray with white pupils, just looking at them you could feel a chill. Lady Qin was stunned and puzzled, as those giant branches were some of the strongest and most powerful spells of hers, yet someone simply froze them and broke them into pieces.

—Lian Hei Hua: Did you really thought I was coming alone? HAHA I told you that this time I would finally let you rest ... this is my new partner Leng Hu * she is not very friendly to say but she does her job well haha ​​

—Lian Hei Hua: that's right! very clever Mr. Dun, I thought that after having a child you had become senile…!

At the moment he said that, the typical hiss emitted by eagles was heard, an imposing bird perched on Hei Hua's shoulder, a dark brown eagle with purple feathers, it was an ancestral eagle he could see from far away and he was totally loyal, he only had one owner who was also the only one who could understand what the eagle was saying. Lightning struck right behind Hei Hua, making him look incredibly scary and in the blink of an eye the couple flew through the air and landed near the small house where his son was being protected by the old woman.

—Lian Hei Hua: If you put up too much resistance I'll kill you and just take care of raising your son! What do you think?! HAHAHA

After hearing that, Lady Qin felt her goblin blood boil with rage to her head. She looked at her husband and immediately he understood what she meant with just one look. The two of them held hands and began to cast a spell, it was so fast that you couldn't clearly hear what they were saying.

—Lian Hei Hua: What are you doing? Pray to the heavenly gods? HAHAHA !!

And she was right, they weren't praying at all they were casting an extremely complicated spell. It was the binding spell that could only be done with someone to whom you were united in soul either by love or friendship. It was a very old and ancient spell, the more people the more resistant and they were only two, very few manage to finish it successfully and those who did did not survive to tell the tale.

Around the couple a whirlwind was formed that was getting bigger and bigger, from it came branches, flowers, plants and stones. An intense light ignited from within the whirlwind and Hei Hua, stunned by the blowing wind, was unable to prevent the attack that  the pair launched at him.They hit him squarely, making a deep wound on his chest. Leng Hu was able to dodge it, however she did not escape unscathed either, the two of them collapsed and lost consciousness. The couple was half unconscious but could see how the house had been completely destroyed; however the small wooden igloo was still intact. Tears came out of Lady Qin's yellow eyes one after another and her husband used the little energy he had to hold her in her arms while he sobbed. The wooden igloo fell apart and the old woman with the child in her arms approached the couple. Lady Qin brought her hand to the boy's face and said:

The rain was falling harder than ever, Mr. Dun and Mrs. Qin stopped breathing, hugging each other, their striking green skins were fading to dark brown. Meanwhile Hei Hua became aware but he was hurt to move, Leng Hu was more stable and managed to lift him with difficulty and the two disappeared into the trees and the eagle flew off without leaving a trace. After a few minutes the rain stopped, the clouds dispersed and the sun came out as if nothing had happened. The old woman looked sadly and anguished at the already dark brown couple hugging on the ground. Branches and plants sprang from the ground as if they were claiming something of their own. It entangled the pair in her plants and the earth parted, the two of them completely covered by the plants slid down. Nature took what was once his and Lady Qin and Mr Dun have gone to where they belonged, to the earth.

These two characters belong to the HUNLUAN DE HEIAN clan, which means chaotic darkness in Chinese, later it is explained in detail what it is about and who makes it up. (Many of the names that appear in this story are from the Chinese language, romanized that has some meaning and others are simply invented by me) 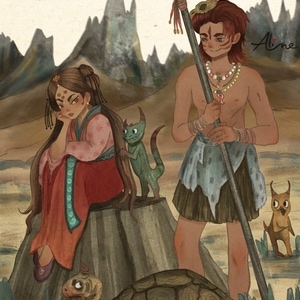 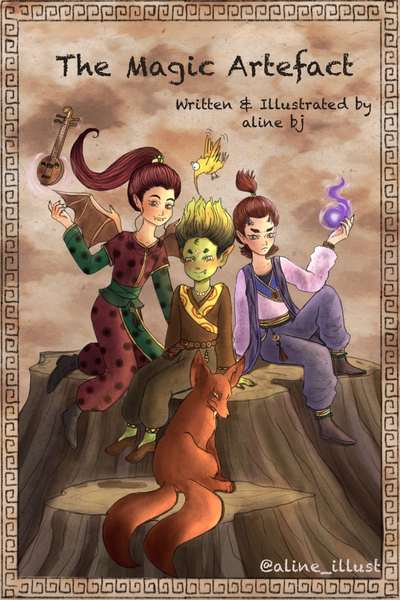 In a world where goblins, demons, vampires, humans, gods and other magical creatures coexist, there is a magical artifact created by the gods who fulfill wishes and have mysterious powers, however it should not fall into the hands of beings with evil thoughts since that It would mean the beginning of an endless war that had ended about a billion years ago. The story begins with little Duqi in which he tells how his parents saved his life and how he later had to face discrimination among his own, And how he managed to cope, then he meets his friends who are of different races but have common goals and objectives. Duqi, Shira and Rion go on an adventure together to find the magical artifact and prevent it from falling into the wrong hands, along the way they learn, meet people of all kinds and face obstacles with their enemies, thus discovering the importance of friendship and love, and the value of life.
Subscribe 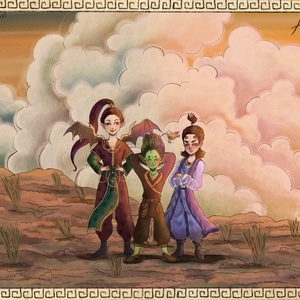