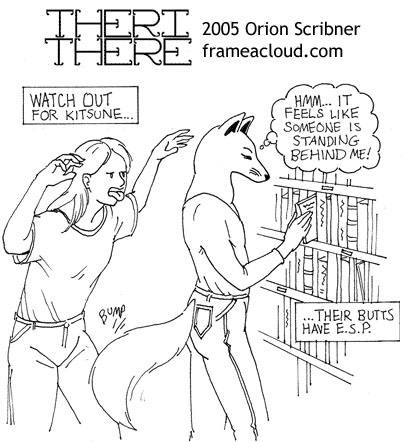 Theri There page from 2005-11-14. Notes:
Today’s comic was inspired by a certain thread in the Theri There community ( http://therithere.livejournal.com/2167.html?thread=25719#t25719 ) where Kyoudai mentioned having had an experience of receiving sensory feedback from a phantom limb, as shown. This could be called a rather odd way of having ESP, Extra Sensory Perception.
Kitsune are a kind of Japanese mythological creature. They’re shapeshifting fox-spirits, cunning magical tricksters. While I could have shown the kitsune in this comic as being like a real-world fox, I preferred kitsune as depicted in Hiroshige’s prints.

Transcript:
An otherkin who is a Japanese fox spirit (kitsune) browses a bookshelf. Someone tries to sneak up and surprise them, but bumps into their phantom tail. The kitsune thinks, “Hmm… it feels like someone is standing behind me!” The caption says, “Watch out for kitsune… their butts have ESP.” 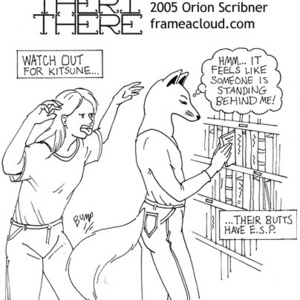