Theri There page from 2007-02-03. People cope with death in a lot of different ways, but this one never worked for me, personally. (In the years since I drew this, I’ve gotten uncomfortable with horror stories, too! Death’s just basically a downer, you know?)
Transcript:
Panel 1. Someone ferociously reading aloud from a horror novel, with highlights such as “death!” “skulls” “gore” “blood” and “entertain.” The protagonist in a t-shirt listens while munching on popcorn.
Panel 2. Caption: “…To me, this is often a less disturbing portrayal of death than…”
Panel 3. A person in a sweater cheerfully reading aloud from a New Age handbook, decorated with hearts, daisies, and rainbows. Quotes include things like “Passing on is a spiritual act, part of life!” “It’s just like butterflies!” “It’s an OK thing!” The protagonist listens, but cringes in discomfort, their hair standing on end.
Panel 4. The person in the sweater starts to read “And the snuggly white light…” but is interrupted when the protagonist bursts out in a panicked scream.
Panel 5. The protagonist starts to retreat, screaming a few more times, with wacky spiral eyes. Their awkward defensive posture is labeled a “knee jerk response.”
Panel 6. The protagonist runs away into the distance, screaming.
Caption: “Maybe this means I’m less spiritually mature than some people.” 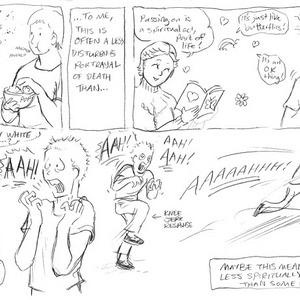