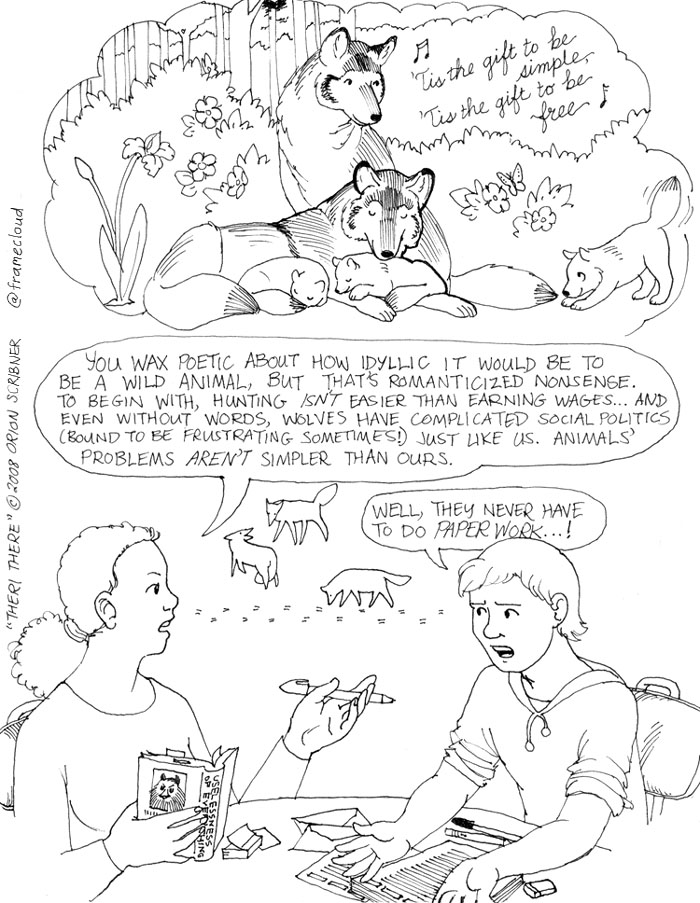 Theri There page from 2008-01-05.
Transcript:
Panel 1 is cloud-shaped, meaning that it’s a daydream. A family of wolves are at rest in a peaceful forest full of flowers and butterflies. Parent wolves watch fondly over their three cubs. One cub is doing a play-bow, while the other cubs are sleeping, cuddled together. Traditional song lyrics are above them:
“’Tis the gift to be simple, ‘tis the gift to be free.”
Panel 2 shows two college roommates quarreling over a small kitchen table. The person with her hair tied back is studying a philosophy textbook titled The Uselessness of Everything, with a muskrat on the back cover. (This is a reference to a book that appeared in Tove Jansson’s Moomins.)
The other person, with short hair, is filling out paperwork.
The one with her hair tied back says to the other,
“You wax poetic about how idyllic it would be to be a wild animal, but that’s romanticized nonsense. To begin with, hunting isn’t easier than earning wages… and even without words, wolves have complicated social politics (bound to be frustrating sometimes!) just like us. Animals’ problems aren’t simpler than ours.”
To illustrate what she’s saying, stylized wolves are shown in the air. One wolf bristles dominantly at the other, who cowers with its tail tucked between its hind legs. Another wolf tirelessly follows deer tracks.
The person with the short hair retorts, “Well, they never have to do paperwork…!” 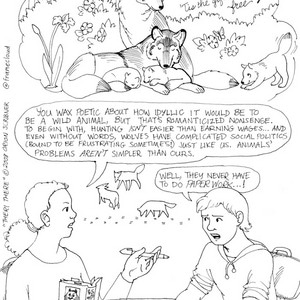