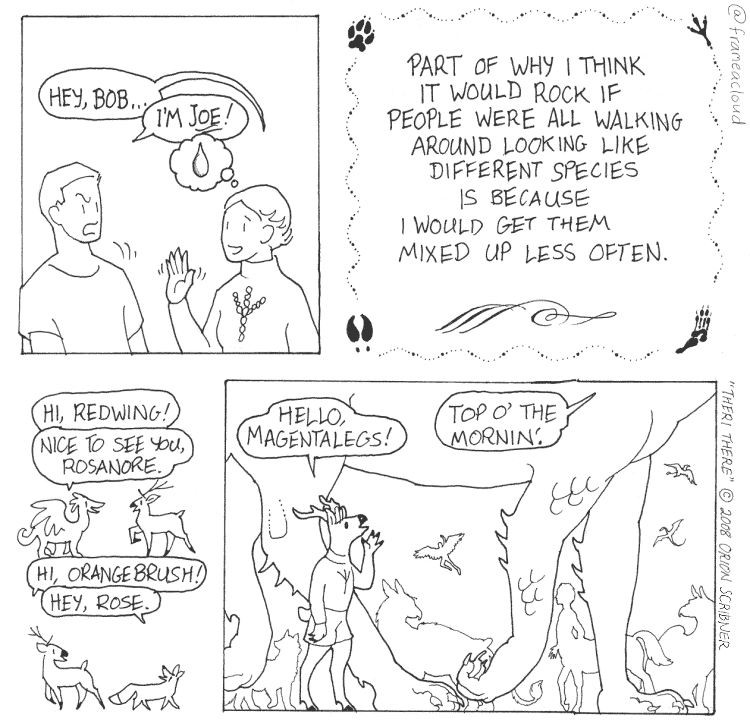 Theri There page from 2008-06-03.
This page has some in-jokes for the Tomorrowlands Project, a shared urban fantasy setting in which otherkin worldwide gained the ability to shapeshift, among other remarkable events. See it at http://tomorrowlands.org/story/index.html !
Transcript:
Panel 1:
Rosanore is an androgynous person in a sweater, featuring a cable-knit algiz rune. She greets a man, saying, “Hey, Bob…”
The man recoils indignantly, exclaiming, “I’m Joe!”
Rosanore has a thought bubble with a sweat drop in it.
Panel 2:
A frame decorated with footprints from a wolf, perching bird, deer, and opossum. It frames this caption: “Part of why I think it would rock if people were all walking around looking like different species is because I would get them mixed up less often.”
Panel 3:
Shown as a deer with antlers, Rosanore says, “Hi, Redwing!”
A winged dragon replies, “Nice to see you, Rosanore.”
Panel 4:
Rosanore: “Hi, Orangebrush!”
A fox: “Hey, Rose.”
Panel 5:
Rosanore is shown as a human-shaped deer with antlers, wearing her rune sweater. She’s surrounded by crowds of all kinds of fanciful beings: gryphons, centaurs, winged people, wolves.
Rosanore cups a hoof-hand by her mouth and shouts, “Hello, Magentalegs!”
A dragon (who is seen only as a set of very, very tall legs walking along) replies casually, “Top o’ the mornin’.” 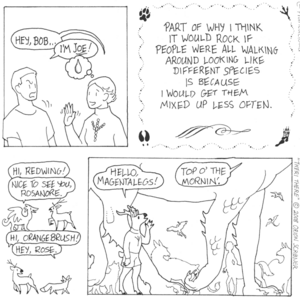