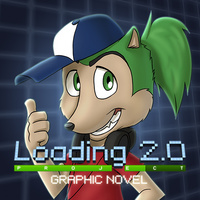 About us!
Hello, guys! This is Roman & Kirill. We present to you this awesome webcomic about the adventures of a green-haired hedgehog. One day Roman had an idea of creating a comic about a hedgehog and give him some interesting friends. But what a rotten luck, Roman can't draw. So he invited his good friend Kirill, who is a pretty cool artist, to work on the project as well. So Roman said: "Kirill, I will write the script, create characters, make page thumbnails and direct this comic, while you use your artistic talent!" Kirill scratched his head and then agreed. And so this wonderful story has begun.

About the comic!
In a fictional world, in the city of Milktown, which is on the continent of Sertaleth, lives a hedgehog named Kam. He sleeps in class, skips school, plays videogames during his free time, and he has no special abilities at all! And he is the main protagonist of the story, by the way!
In this fictional world interesting things happen every day, and it is hard to predict what awaits you tomorrow. In Milktown, where our protagonist lives, children began to disappear! In the same time, Omega Corporation has developed a strange technology that allows to gain access to the most important part of the brain - imagination! Research of the virtual reality has allowed Omega Corporation to achieve great results! Their new project was to change the world’s idea of the virtual reality. However, the Corporation has their own vision about the use of their creation! Of course, this technology is completely secret, and even the government knows nothing about it! What has become of it, and most importantly, how Kam got involved in this? You’ll find that out in the Prologue that will contain more than 70 pages! After that, the actual story divided in volumes will begin.

Pages are published twice a week, on Tuesday and Friday.
Greenhair hedgehog to you all!

No messages or posts yet