Jun was coming back from the art supply store when he spotted Chris sitting by the shopping district fountain, smiling. Their date had gone really well. Chris was a real gentleman, funny, and cute. The person he was smiling at was cute and feminine.

His sister, maybe? That had to be it, Jun decided. He walked over to say hi before he got within earshot to hear their conversation.

“Gold and silver!” the sister(?) said as she rubbed her voluptuous bosom against Chris’ arm.

“I’m so excited about our wedding!”

Jun wanted to give things the benefit of the doubt. Maybe Chris was paying for his little sister’s wedding. Even though Chris was still a college student…. Maybe their family was rich. Maybe he did day trading… Chris’ aura was silver, yet the person beside him was rose.

Jun approached the couple and walked up to Chris’ stunned face. “Hi.”

“Jun!” He jumped away from the other's chest hinting the truth and thus flipping Jun’s merciless switch.

“So you already have a partner.” Jun announced loudly. “I wouldn’t have expected that after our pleasant date yesterday.”

Jun didn’t really want to break up a couple, but these two weren’t true matches anyway. The poor soul deserved to know their fiance was a rotten cheater.

“I see I’ve just been a toy to you!” His now ex-lover ripped off what was apparently a wig and threw it on the ground. "Don’t you ever come near me again!” A silicone boob smacked Chris in the chest.

“Finley! It’s a misunderstanding!” he pleaded.

Jun realized the silicone boob had come from Finley's now flat chest as the nipple of the second one hit Chris in the eye.

“I can’t believe I dolled myself up for months for scum like you!” Without sparing another glance, Finley stomped off.

Jun wanted to give a good punch but he’d already committed enough violence for the week. “You have five seconds before I use this bag of art supplies like nunchucks to knock your skull into space.” Before Jun’s bag could finish making one rotation, Chris had sped off and out of sight.

Why am I so unlucky? Jun thought to himself. There had to be at least one good match.

Jun pivoted to see a stranger holding a pack of paintbrushes. “I think this fell out of your bag.”

“Thank you.” As Jun reached for the brushes being held out to him, he spotted the aura coming from this stranger’s chest. The same silver as his own. By now, Jun was a little more than skeptical. He quickly took the brushes and shoved them into his bag.

“I saw what happened. Are you okay?”

“No problem.” He smiled and Jun slapped himself to not be blinded by looks.

Jun nodded and sped down the sidewalk towards his job, making sure to check behind him for anyone following. He wouldn’t be surprised in the least if this third match turned out to be a stalker.

Once he arrived at work, he greeted his coworkers on the way to the break room to change into uniform. “You look tired,” his coworker Yavin remarked. Jun could only chuckle.

Once he got dressed, he finished tying his apron around his waist while stepping behind the bar counter to start a fresh brew of coffee. “Good evening, Mr. Kent.”

Jun smiled. “We don’t have much to worry about, Mr. Kent.” Their cafe was popular in the mornings and lunchtime but things typically slowed down around dinner because of the limited menu.

Jun chatted with his coworkers and customers as he handled the small crowd. Mr. Kent had turned on the TV just in time for the 6 o’clock news.

“A robbery?” a customer noted in awe. “What a shame. This area has always been safe.”

Jun looked at the television and nearly dropped the cup he was holding. A photo of the man who’d recovered his paintbrushes was pasted on the TV along with the robbery headline.

“I’m going to take out the trash!” Jun left the dining area before Mr. Kent could question his urgency.

After grabbing some bags from the trash cans, he went out the back door and threw them into the dumpster. His first match was a perverted molester, his second a lying cheater, and the third a criminal!

“What’s wrong with me?” he shouted to the sky. “No, what’s wrong with YOU?! Do your job right, you crappy Gods! Don’t make fun of me! Either take this stupid power away or give me decent matches you no good—”

“Good grief. You complain too much,” a masculine voice said from behind him, causing Jun to leap out of his skin. “What’s the problem?”

Jun turned around and his jaw dropped at the sight of the person in front of him leaning against the brick wall. He was incredibly handsome with a toned body, chiseled face, and long, silver hair tied into a ponytail; but his army green sweats, black slides, and navy shirt that said “Eat Sleep Game Repeat” clashed with his features like chocolate and onions. The tanned man was yawning as he flicked an eye booger off his finger.

Jun rubbed his eyes, wondering if he wasn’t hallucinating the GQ-worthy man clad in geeky, mismatched clothes. “Who are you?”

“Who am I? The one you were just cursing at! Isn’t it obvious?”

Jun stared, confused and considering if he should tell Mr. Kent to call the cops.

As the man announced his identity, there was an echo of “love love love” and flower petals blew through the alley.

Jun blinked. Forget it, he decided, pulling out his phone. He’d call the cops himself. 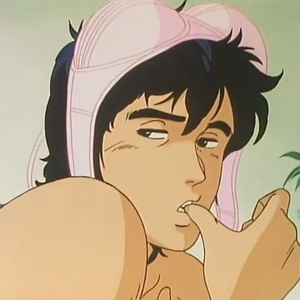 lmaooo this is hilarious