Chloe sat at her desk, reading from her textbooks. In January, she’d taken her first psychology class, her first math class, and yoga. The coursework wasn’t as intense as she had expected it to be, mostly because she really liked psychology. She liked learning about the mind and how it worked and how it processed information, among other things.

For this term—Spring term—she was taking the second half of the introductory psychology class, the introduction to education, and another yoga class. It wasn’t going to be the easiest term at Portland Community College, but it certainly wouldn’t be incredibly difficult.

“Chloe!” Nathaniel called from the bottom of the stairs. “David’s here!”

A week ago, David called and asked her out on a date to a nice restaurant. They didn’t get to see each other much, so he wanted to take her out for a fancy date to make up for it. For them, going to Red Robin was considered fancy which, thankfully, didn’t require her to dress up. She hated that. Too much work.

“Coming!” Chloe called back. She stacked the textbooks neatly on one side of the desk, turned off the lamp and stopped at her mirror before opening the door for her regular appraisal check.

Ever since the last time she cut her hair dreadfully short, Chloe decided to try to let it grow out again. It grew fast, nearly to her shoulders now. But she kept bleaching it. It may have been incredibly expensive, but Chloe even went back to see Amber the stylist. (The second visit, Amber convinced Chloe to try out a new color, so she went with blue. David loved the new look since she was like a character from a video game about time travel. Nathaniel gave his seal of approval, especially since she didn’t have to worry about keeping up appearances for any employer at the moment. “What better time to be crazy and wild?” He’d said. Her mother hated it and demanded she change it back. She hadn’t. The last time she bleached her hair, she didn’t get the color back.)

Instead of wearing a dress and stockings as she occasionally wore, Chloe had settled on a pair of nice gray slacks, a white button-up shirt, and a black fashionable strapless corset. It wasn’t often that she wore heels, but it was the only shoes she had that actually looked good with her slacks.

“Good enough,” Chloe said with a smile. As she descended the stairs, her breath caught in her throat. David stood at the bottom of the staircase in a suit. And not just any suit. A nice tailored suit.

Through their high school years, and the year they’d been together, Chloe realized that David did not like suits. He really didn’t like anything that would give the impression he was conforming. He wasn’t a rebel. He just wanted to be himself without toxic masculinity getting in the way. He stood at six foot three, wore black jeans with combat boots a lot, but also wore nice collared shirts. The top third of his hair was a rich brown that was kept short, usually spiked into some sort of Mohawk (without actually looking like one in Chloe’s opinion), but the rest was shaved off. He became a man loving tattoos, usually proudly sporting the ones on his arms just to get a good reaction.

The man in the suit was not the man she was dating.

“We have a date, remember?”

“Yeah, I remembered. I just didn’t think it required a suit. Do I need one?”

David chuckled. “No. Come on. I’ve got the car running.”

David slipped out the door as Chloe grabbed her coat and purse. She leaned into the kitchen where Nathaniel was cooking.

“Alright.” Nathaniel was stirring sauce. “Gonna be out late?”

Nathaniel laughed. “I think you’ll be out later than that.”

When Nathaniel looked back to her, it was a mixture of confusion and amusement. “Go on. I’ll tell your mom you’re out.”

“Have fun!” He called just as the door shut.

When David and Chloe went on dates, it was hardly ever somewhere fancy. They never set the bar that high. A trip to Red Robin usually qualified as “high class” which did not prepare her David parking the car along sixth street in Downtown Portland. He paid for the parking spot and offered his arm to her walking them to the entrance of the Bistro 921 inside the Hilton hotel.

The lights were low, the conversations hushed, and the gentle clanking of utensils on plates hung in the background. When they arrived at the podium a young man greeted them warmly.

“We had a reservation under Anderson, for two.” David said.

“Right this way,” the host said. They were escorted to a booth along the window to the right. “May I start you with something to drink?”

“Just water, please,” David said. The host waltzed off, blending into the background of waiters and busboys. David removed his coat, helping Chloe remove her own, before sitting across from her.

“This is really fancy,” Chloe whispered. “Are you sure I’m not under-dressed?”

“I know, right? But you deserve fancy things every once in a while.”

“I would have settled for Burger King.”

Chloe looked up from the menu to look David in the eyes. There was something she couldn’t quite place in his eyes. David broke her eye contact as he perused the menu.

“Get anything you’d like tonight,” David said, “it’s my treat.”

“Don’t worry about that, Chloe. I promise you, it’s fine. Just get what you want and not just what’s cheap. Promise me.”

With a small nod, Chloe studied the menu until she decided on the chicken Alfredo after all, with a side of Caesar salad. David ordered steak. (He always said steak was too expensive to make for himself because he was likely to ruin it. It was better to pay a chef to prepare it right than botch it.)

The waiter took their order, and their menus, before disappearing into the restaurant. Chloe fell silent, David sighed contentedly. It was nice.

“Hey, Chloe?” David held his hand out on top of the table.

“Yeah?” Chloe laced her fingers through his.

David had never told her that before. And Chloe had never said those words to him, either. For Chloe, falling in love seemed impossible, even if she was never sure why. For David, falling in love was what his parents wanted and he always chose contrary.

“You don’t have to say it, Chloe. It’s fine.” David kissed the back of her hand. “I honestly thought we would have been history by now. We both did. But here we are a year later. You never thought you’d go to school; I never thought I’d cover a tattoo for anything. I cannot even believe this is coming out of my mouth, but…”

David moved from the table, keeping Chloe’s hand gently in his as he knelt on one knee, pulling a small velvet box from his pocket. He only let go of her hand to open the box, revealing a small white gold ring with an amethyst set in the middle, with two small diamonds set on each side. The light made the gem sparkle!

“Chloe Burgess, will you marry me?”

Chloe’s mouth fell open and all the air vanished from the room. Here they were, in a fancy restaurant with an engagement ring. And Chloe so desperately wanted to say yes! She wanted to throw the ring on her finger and shove it in her mother’s face! But her mother hated David. It was something Chloe knew intuitively when they started dating because she thought he was corrupting her or something. How would she react? How much screaming would there be? Would Nathaniel at least be happy for them? What if her mother never spoke to her again? What other family would she have then?

David stood, securing their love onto her left ring finger. Chloe melted into his arms, holding him close to hear the thrumming of his heartbeat. His hand caressed her hair. Whatever stress or anxiety he had about asking her disappeared from his body as his shoulders relaxed.

This is so sweet! Go, David! 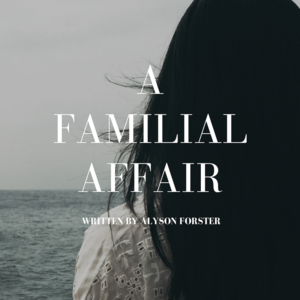