Jun texted Ai as he followed the band down the hall. ‘Going to get barbecue with the band.’ Ai texted back a picture of his swollen stomach and an empty pizza tray with sleepy-looking eyes. ‘Go home. Don’t make trouble,’ Jun replied.

Kyungwon put on his sunglasses and bomber jacket before they stepped out of the building. Fans were waiting and burst into screams.They’d made Jun carry some equipment to look part of the live house staff. Leslie blew kisses back to her fans, Bob didn’t really seem to have fans (poor guy), and just Kyungwon cooly walked forward.

One of the fans rushed forward. “Kyungwon! I’ve been following you since high school! Please let me be your lover!”

Kyungwon paused and slid his sunglasses down his nose. “Sorry. Kyungwon’s heart is with the wind.”

The girl didn’t seem to mind the rejection. She squealed along with the other fans. No one noticed when Jun got into their van. Bob drove off and Kyungwon covered his red face.

Leslie snickered and told Jun, “He always says these cheesy lines that send them wild but ends up embarrassed afterwards.”

Kyungwon seemed like a cool, cold guy but in reality he was excitable and innocent. Jun thought it was cute. Wasn’t this what Ai called a moe gap?

Kyungwon took a sip of his beer and wiped his lips. Jun thought they looked delicious. He slapped his cheeks to get his mind out of the gutter. As he looked Kyungwon over, he suddenly felt self conscious about his appearance. He probably looked so lame beside Kyungwon in his boring grey hoodie and blue jeans.

Kyungwon turned to him and flashed a smile. Jun looked away and fidgeted, rubbing his hands together in his sleeves. “Um… So uh, about the song.”

“I saw you with a tall handsome guy when you first came in. Is he your boyfriend?”

“Oh.” Kyungwon chuckled. “I was going to say, if I knew that you would bring him, I would have given you another ticket for him.”

Jun sat down and relaxed his shoulders. Wait, so he would give a ticket to Jun’s boyfriend but not his cousin?

“Part of me doesn’t really want to ruin the song with lyrics,” Kyungwon said thoughtfully.

“What?” Jun tilted his head and Kyungwon turned to look him in the eyes.

“I’m not the best at writing songs.”

He knew?! “Well, I’m not a lyricist either. Just an artist. What if you keep the lyrics simple and just repeat the same few lines?”

“Do you have any pictures of your art?”

Jun opened up his phone to show his paintings posted on social media.

“Wow… So we’re both the creative types. That’s cool.”

Jun giggled awkwardly. “Yeah, I don’t exactly have synesthesia… but, you can say I have an affinity for colors too.”

Kyungwon gazed at him. Jun wasn’t sure if the glassiness of his eyes was due to the alcohol or emotion, but it tugged at his heartstrings nonetheless. “Let me think about the song alone a little longer.”

Jun nodded and smiled softly. “Sure.”

Is it from the alcohol or emotion?
A. Emotion!! Love!
B. The alcohol; you’re overthinking.
C. Both?
D. Neither, he just needs eye drops. 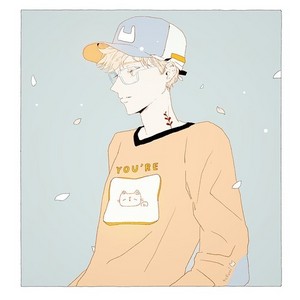