Even so early, the city of Monterose was bustling with life. She looked over to the various people walking along the street; the businessman falling over himself to catch that ever-elusive taxi, probably needing to get to a critical meeting to plan out another meeting. She enjoyed hearing him cuss out another cabby, zooming past him, though the smell of exhaust was annoying. She looked over to a teenager, probably skipping a class of some sort to go to the downtown area, to be a part of a moment, and yet separate from it. She could hear the music from the headset of the teen, bopping her head to it slightly. It was a heavy song that sounded violent, perfect for her tastes.

She especially enjoyed watching from this spot, a small antique iron fence separating her and the other patrons from the crowd just only a few feet away. The umbrella blocked the sun, which helped her slight headache, probably from the poor sleep that she got from the night before. She mused on the world beyond the little fence, from her perch, a lovely tall bistro table with a rather comfy chair. She lifted her head from her hand, using it to pick up her one of three chocolate croissants, taking a light bite of it. Sure, it wasn't precisely the meal she wanted from last night, but it was tasty. It satisfied a part of her, and she gave a little moan, finishing the pastry in the next bite before. She wiped her hand on her jeans, a little easier than trying to use the napkin on her left side before reaching up to take a sip of her coffee.

That soft voice caused her to pause, her bit of quiet joy devolving into growing annoyance, maybe even anger. She scoffed, taking a sip of her coffee in disinterest, "Yes?"

The voice did not seem perturbed by her brusque reply, "I was wondering if I could join you? This place is a little crowded, and I see you have an empty chair."

She gave a slight, derisive chuckle, setting down her cup and turning towards the intruder, "Actually I do mind-"

Her voice was caught in her throat as she looked up and into deep blue eyes. Never had she seen such depths. They were like the ocean, deep depths that one could easily drown in. Her mind hiccupped; the concepts of words seemed forgotten. Words? Who needs words? Not when you were looking up towards the near porcelain tone face of an angel.

That beautiful face had a slight smile, and he nodded, acknowledging defeat, "Well then, I'm sorry to bother you." He turned away, dark brown bangs fluttering over those deep eyes that we're turning away from her.

She could not allow that. She wanted those to keep those eyes and that smile, by her side, "I don't mind." Her voice came out in a slight squeak, and she coughed, clearing her throat, "You may join me."

Those eyes turned back to gaze at her again, his smile widening, "Thank you, Miss." He gave a soft chuckle, "I'll try not to bother you."

She said nothing back, looking away from him, hoping her face was not flushed. Once more, the concept of words was difficult. He seemed content to just sit, leaning back and opening his book. She looked back at him to study him, her eyes taking in lean forms of his chest and neck, covered by a comfortable shirt. She took another sip of her coffee, hoping she wasn't trying to eat him with her eyes, thinking a bit before finally finding some words to say, even if it's a little late, "It's no bother. I'm a little tired of sitting alone, anyway."

"Oh?" He grinned a little, looking up from his book, "You know I see you here sometimes, always at this spot." He set the book down, taking this opportunity, "The mystery fire-haired woman, some chocolate croissants, and a cup of coffee, looking out over the world… Studying it, like she was surveying a kingdom…"

"Poetic." And close to the truth. She smirked slightly, tilting her head, "So I have a stalker?"

He laughed his voice gentle, reminding her of a soothing song. It seemed as angelic as his face, "Not at all! I mean…it's only when you're here." A blush formed along his cheeks as he admitted: "I wanted to meet you." He looked down, his eyes soft, "You kind of remind me of someone."

"Well, this may disappoint to realize, but I am a unique individual." She teased gently, fiddling a bit with the cup of coffee between them, her fingers rocking it back and forth in giddiness.

"That's true, and also why I wanted to take the chance to get to know you." He brought a finger to his cheek, scratching it. "My name is Tristan."

She held that name in her mind, studying it, studying his face again, keeping the two close before locking it away in her mind, where she would never lose it, "Well then, Tristan, what would you like to know?"

He chuckled, "Now that I'm here, it's hard to narrow it down." He looked over at her face, before his eyes lowered towards her left side, unable to ignore what was missing. His eyes darted away quickly, and he parted his lips to speak.

By the most beautiful person Ira has ever seen...

He seems so soft and innocent 👀 and it’s crazy how meeting certain people can flip your life upside down. 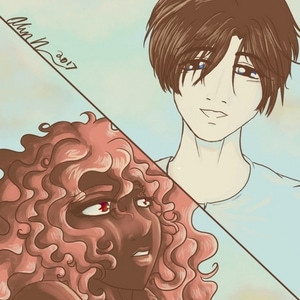