"SHE DID! SHE FUCKING THREW IT AT ME!" Cana began to jump in anger, stamping her feet before pointing with vicious glare at Ira, "SHE TRIED TO KILL ME!" She then looked to several dark, green, and brown stains on her purple skirt and shirt, "She ruined my CLOTHES!"

Ira shrugged, tilting her head towards the older man, "Would you believe me if I said it was in self-defense?"

Now it was Edwards' turn to grit his teeth, letting out a deep sigh of exasperation. He turned to Envy, wagging a finger at her, "You know we are not supposed to shoot the head of our family."

Cana hissed and stuck out her tongue, "Whatever! She's no boss of mine! Just some lucky whore!"

Ira's grin vanished, the fire that was always simmering beneath the surface coming to light. Ruby eyes narrowed into angular slits as her voice lowered to a deep growl, "Oh...Is that right...?" She sounded more beast than human as she turned to face Cana, her hand dropped to her side into a fist. Her head tilted as she studied the smaller prey, fiery curls coiling around her face, enhancing the predatory glare, "Do you want to elaborate?" The younger prey did not usually succeed in her antics to annoy her, but sometimes the right button can be pushed.

Or the wrong one.

Canas' tongue instantly returned back to her mouth, her face paling a little bit. The pressure felt heavy in the room, those red eyes targeted onto her. The hairs on the back of her neck stood up, and she could feel a cold sweat going down her chin. She coughed, trying to put on a brave face, "I mean, there is someone else I prefer, b-but I'm sure he can take your place soon!" Cana did not look back at Ira, her arms crossed tightly as she tried to fight the fear that was making her heart pound.

Edward looked over to Ira, the Royce, a forgotten memory before the fiery storm that was threatening to devour everyone in the room. He took a deep breath to gather strength as he pressed his thumb against his middle finger, quickly letting the sound of a snap to get her attention.

He was a little too successful.

"DO NOT SNAP AT ME, OLD MAN!" Ira snarled, her words becoming a roar that seemed to echo along the walls of the office. Her moods were volatile, and it was clear an unpleasant memory had been triggered. The rage of that memory was feeding that fire, threatening to consume everything in the office until it was nothing but ash.

Edward took another breath; his own heart had almost stopped at her words, "We have other business to discuss, Lady Dante. You shouldn't let a small girl bother you so much." He gave an unusually light grin, hoping to use humor to calm her down.

It seemed to work. The pressure in the room began to dissipate, and Iras' gaze softened. She chuckled, tilting her head back and forth to release tension from her neck; a loud crack can be heard her neck released a pop, "You're right. It's not a big deal." She walked past the shaken Cana, beyond the dark red chairs of the room to a large, black chair behind an impressive mahogany desk. She sat down with a yawn, leaning back against the cushion, "I didn't sleep well, so I am touchy."

Edward sighed deeply, his heart finally and slowly relaxing back to its normal rhythm, "Yes, well, I imagine all the excitement from last night could be draining." He closed the French doors of the office, wanting their talk to be more on the private side. It was unfortunate that young Cana was in attendance, but she was a part of the top of the family, like him. He picked up his briefcase from one of the red chairs, placing it on Ira's desk, "In fact, that was one of the things I wanted to talk to you about."

"Oh, dear. Does insurance not cover the damage after all?" Ira rested her elbow on her desk, leaning her head against her hand as she released a bored sigh, "Sybil told me it should."

Edward grumbled, "That's not it. These little pests of ours have become quite the annoyance lately."

Ira gave a small yawn before shrugging, "Well, perhaps I would have taken care of them...if ENVY did not interrupt me."

Cana's eyes were dazed, and she was still holding her arms close to herself. When hearing her moniker being mocked, her trembling stopped. She closed her eyes tightly, taking deep breaths to steady herself and let go of her fear, "W-Well someone had to save your ass!" She huffed, her bravado returning as she marched to the desk and jumped onto it, taking it as a seat. She glared at Ira, "Looked like you were having a hard time!"

Ira looked over to Cana, her red eyes gleaming at the memory of last night, causing a low chuckle to escape, "I was actually having fun. I thought it was going to a massive disappointment." Her smile widened, pearly white teeth bore against the rouge of her lips, "Instead it was invigorating."

Edward scoffed, coughing into his hand, "Yes, well, it was a bit of a disappointment to some of our business partners. This will cause a delay, and we should have an explanation available."

Ira smile turned into a sneer, moving a fiery strand from her eyes, "Obviously we blame the vigilantes. They are the cause of this mess." She set her elbow on her desk, leaning her chin against her hand, the passion that was her in her eyes moments ago fading into boredom, "They cause the explosive damage, they 'inspired' the attention of the police, all that nonsense."

Edward raised his eyebrow, before sighing, "We are not the only ones being bothered by this..." He opened his briefcase, pulling out a folder to review the reports, "...Seraph? And...Archangel? Ridiculous names."

Ira tilted her head to the side, "We go by the Seven Sins for code names. I don't really see the difference, Greed."

The golden pools of his eyes gleamed brightly as he glared, "That is a tradition! A long-standing honor! The Dante family has stood by these titles for centuries! To have our prestige being compared to a bunch of silly monikers used by extraordinarily persistent 'heroes' is an outrage! Why I-"

Edward growled, shoving the folder back into the briefcase, "In any case! They have annoyed our partners as well!" He took a moment to pull off his glasses, pulling a handkerchief from his suit to clean the lenses, "So I suppose it wouldn't be too bad to light a spotlight on them. Give them a little pressure from our allies."

Iras' eyes had been glazed during his spiel that she almost zoned out entirely. However, as the topic returned to their pest problem, she smirked, "Exactly. Simple." She leaned back, stretching a bit, "Was that all you wanted to talk about?"

This time it was Edwards' turn to give a little smirk of his own, putting on his glasses with a little bit of flourish, "Why not at all Lady Dante. I have one more thing." He pulled out another folder from his briefcase; actually, it was several folders. Thick sheets of paper smashed between thin plastic, barely holding themselves together. He set the having folders down onto the desk, each one emitting a heavy "THUD" against the rich reds of the wood, "These are your prospects! I have binders full of them!"

The logistics and costs of the previous night’s affair are discussed.

But what could that be?

Snapping at Ira... definitely a death wish 😅 that seemed like a nice, calm meeting 🙃 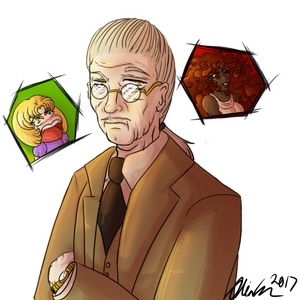