Ira blinked once, then twice, "Prospects?" Cana reached for a photo sticking out of one of the folders, Ira eyes following those small fingers.

"Why for a possible merging of our family with one of our allies!" Again he was met with blank stares. He coughed, salty droplets of sweat falling down the side of his forehead. "Since you are quite the powerful widow..." He ignored that slight snarl from Ira, trying to fight off the daggers that were piercing his neck, "And that there is an opportunity for further growth of our assets, that you may be open to an arrangement with one of the sons-"

"Are you serious?" Ira began to grind her teeth, "You're trying to set me up."

A high pitched squeal echoed throughout the room as Cana cackled with delight. She looked at the photo with pure joy again before she grabbed one of the folders in the binder, making sure to take in each eligible bachelor.

Edward ignored another squeal of laughter, coughing to fight back the growing ache of his nerves being lost, "Now now Ira, hear me out. I know you have preferred a more...aggressive approach when it comes to our territories, and it has not failed us yet. However, we can gain power without bloodshed and gang fights."

Ira's teeth continued to grind as she pulled another photo from the giggling girl on her desk. "Isn't this McKellys' son? I thought that old man hated us."

"Oh, he does, especially since you took the docks from him.  I assure you, though, money and power are all that is on his mind. He may hate us, but he knows where the power lies." He motioned for the photo, holding his hand to examine it.

Ira took another look at the photo, then yawned, dismissing the picture back to the old man. "Either way, I'm not interested."

Edward balked, looking down at the picture, "But he is good looking! In fact, most of these men are and ALL of them from powerful families. You wouldn't be giving up any power!  You would just be strengthening our legacy!"

"Edward..." Ira's voice dropped an octave, the growl returning with a warning, "I'm not interested."

He gave an exasperated sigh, "I knew it would be difficult, and I know better than to push you." He closed his now much lighter briefcase, "Just consider it." He gave a small bow before turning to walk away. He paused, holding a hand up, "But if anyone catches your eye, I can arrange a meeting."

Edward opened one of the doors, looking back over his shoulder, golden orbs meeting the flare of her gaze, "Ira, not everything can be won by force. Just consider a more feminine touch." With that, the door closed behind him.

If glass and wood could combust with a look, the entire mansion would be in flames by her glare. Ira stared long and hard at the door before looking at the folders and papers. Cana smirked, seeing the older woman's annoyance seething out. She set a photo down, leaning closer to Ira, giving a soft hiss, "You know...this wouldn't be a problem for Darrion."

Ira's eyes shifted towards that hiss, her voice low, but without the edge, "Why's that."

"Well, he would've had everyone under his thumb. No need to 'marry' for power." Cana giggled, green eyes glittering with the thoughts of her noble brother, "No one would doubt him. Shit, since he has a dick, no one would push him towards some bitch to marry." She gave a laugh, finding the entire idea hilarious.

Ira sighed, rolling her eyes, managing to use the grating voice of her little sibling to calm her a little. She knew how to end this little tirade, "Your brother seemed to think I deserved all this. All of it. If he wanted it..." She gave a cruel grin, taunting the young girl with the impossible, "He's always welcomed to try and take it from me." She rolled her eyes a little, "He also never seemed to complain."

Canas' laughing stopped cold, her brow furrowing, her face turning red with irritation, "Well, whatever! He's just biding his time!" She jumped off the desk, knocking papers and photos onto the ground with her dainty hands in a small bit of retaliation to the truth, "Who'd want a fucking angry bitch like you anyway!" With that final insult and a well-timed middle finger, Cana left, slamming the door closed.

Ira looked over to the papers on the desk, the photos. Her impassive gaze traveled overly dry descriptions of family and financial standings, over vapid pictures of various men, each one more boring, more predictable, weaker than the last. They seem to blur together into one bland mafia image. She looked back towards the doors again, repeating softly to herself, "Who'd want you anyways...?"

Blue sapphires glittered in her mind, sapphires of the deepest blue that pulled her into warm waters. That light touch of his soft, porcelain fingers against her hand brought her back from the darkness. His soft pale lips curled into a gentle smile, followed by a soft laugh that weaved notes of music out of thin air.

Music of an angel, who was single...for now.

She gave a small smile, "Who would want me, indeed?" That smile widened before finally, her loud laugh filled the office. She gave a little snort towards the end of it, her eyes gleaming before she looked back down at the mess of papers, "Shit." She shrugged, smirking, "Fuck it, it was all going to go into the trash anyways.

Edward aka Greed, offers a diplomatic alternative to building up family wealth and power.

Ira is not amused.

Thank you for being so awesome and reading my series! If you enjoy my stories, please let me know and check out my stuff on Twitter and/or Instagram and/or Tumblr as CodeMonkeyArts or visit my blog at codemonkeyarts.com! comment! 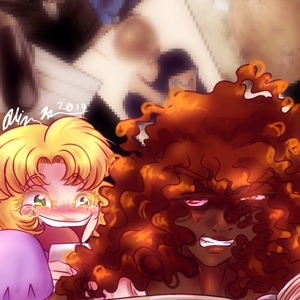