A faint blue glow always emanated from the room. Slow droning and beeps echoed from the door, accompanied by static or voices that seemed to break or fall in and out of existence. While the rest of the mansion held a vibrant, warm glow, it looked that the same glow would fade into a near sickly flicker, with lights sometimes blinking on and off down this hall, towards this particular room. The housekeepers and guards hated going down that hallway; talk of ghosts or shifting cables originated from their dealings near that room.

Ira walked down the hall, heels echoing against the wall as she walked towards that open door, following the hum of machinery. She paused, hearing a heavy thud and crash, a soft chuckle escaping her lips. That thud sounded very familiar. She entered the room, leaning against the frame, looking down at a hunched figure picking dusting off his hat, "Cleaning up Sybils' mess, Ori?"

Orsin jumped, almost hitting the ceiling. The pounding of his heart drowning out the humming and whirring of the multiple cameras and drones focused on them, "Jesus, sis!" He looked over to Ira, towering over her, his eyes wide with surprise before he took a deep breath, his shoulders slouching, "You startled me!"

Ira grinned, gently patting his large, broad shoulder, "Sorry about that." She looked around, whistling at the separate coiled, tangled masses of cables littered around the rooms, multiple pieces of metal parts and limbs scattered in different dark corners, lenses peering like eyes in the darkness, "You're working hard. You know we pay people to do this, right?"

He picked up the broom that he protected from his fall, giving a little sigh, "They usually don't know which cable goes to which monitor." He motioned over the multiple screens towards the back of the room, each one holding a different scene. The monitors stretched to the top of the ceiling, curling around the edges of the wall.

"Besides…" He trailed off, his head turning towards the large chair in front of those screens, his gaze soft with a little smile forming around his lips, enhanced by his short beard, "She prefers if I was here." One of the drones shivered a bit, it's beeping sound almost like giggles.

Ira smiled softly, her eyes giving a rare, gentle gaze, “Damn it, Ori, you two are adorable.” She looked towards the giggling drone, then to the chair, “I take it she’s awake?”

Orsin nodded, setting the broom against the wall. He bent down and picked up a nest of cables, his eyes narrowed in concentration as he separated the yellows from the greens. “She’s up, though I think she needs to power down a bit.” He bit his thick a bottom lip, her large brow furrowing in worry, “She hasn’t eaten yet either.”

Ira blinked, before shifting her right shoulder a bit, her heard motioning towards her purse. “Well, I had a visit to a certain cafe…”

His head spun towards her, big orange eyes glistening, a hopeful smile on his face. “The cafe with a patio and blue umbrellas? The one with the apple and cinnamon croissants filled with banana custard?” He set the broom against the wall, large fingers twiddling with timid joy as his eyes looked down towards her purse, his mouth-watering.

Ira smirked, moving her arm down so the purse could open just a little more, letting a brown satchel of treasure peek out, “I order an extra three just for you two.”

The larger man gave a little squeak of joy, his fingers carefully pulling out the parcel that held golden, flaky mounds of deliciousness. He opened the bag, sighing at the delightful smell, “I’ll have to warm these! Oh, she’s gonna love them!”

The drone peered over his shoulder, giving a nod of approval before heading towards the door. Orsin looked over to it, a beaming smile of gratitude on his face, “Looks like she’s happy too!” He leaned down to give his sister a kiss, her head turning to the side to provide easy access as he bent low, “Thank you! You’re nice today!”

Ira chuckled, enjoying that bit of brotherly affection, “I had a good morning.” She nodded towards the drone that seemed to be bouncing up and down in the fair, motioning towards the hall, “You better hurry. She’s definitely hungry.”

Orsin laughed heartily, nodding before nearly skipping out the door, following the drone as he carefully held the pouch of golden custard-filled wonders.

Ira looked back towards the door, making sure he was gone, before walking towards the back of the room. The closer to the chair she went, the dimmer the lighting became, until nothing but the blues, grays, and whites of the monitor provided squinted sight. She leaned against the large console, carefully avoiding the metallic hands of drones working against the controls. She peered over to gaze at the nearly still figure in the chair, her voice soft as to not startle her, “Hello Sybil.”

White hair sparkled against the artificial lights of the monitor as the woman in the chair barely turned her head. Light blue eyes, showing nothing yet taking in everything, met Ira's red ones. She gave the slightest of nods as a greeting, the motion causing the softest whisper of sigh to escape her thin lips.

Ira nodded in return, looking towards the monitor, "I need a favor."

"Favor?" A soft voice, one that can only be heard with focused ears, answered her. Sybil tilted her head up slowly, both eyes now gazing at Ira.

"Yes, a small one. Very easy." Ira felt her cheeks warming up, looking away, shyly, "I need you to keep an eye on someone."

"The boy." Sybils' lips slowly curled into the faintest of smiles. She knew. Of course, she knew, "Cute."

Oh god, her cheeks were so hot now. Ira bit her lip, nodding, "Tristan. I need you to keep an eye on him." She took a deep breath, trying desperately to hide her embarrassment.

"Stalker." The word came out with a weak giggle; Sybils' misty and pale blue eyes were soft with pleasure.

Ira huffed, giving a growl, her hand reaching up to rub vigorously against her curls, "I just want to make sure he stays safe is all!" She glared down at the frail woman, though there was only sizzle in her eyes, "Just let me know if there is any trouble."

Ira sat up, her heart pounding a little faster, and yet there was no war, no fight. Just a crush, "Don't let anyone know. Just send a status to my phone."

Sybil's eyes rolled slightly as if that was the most apparent detail that she did not need to hear, "Of course."

"Thanks, Sybil," She moved to walk out of the room, hearing Ori skipping back with a deep silky hum of joy.

As Ira walked away, the softest wisp of a voice followed her, slipping into her ears. A gentle, pleasant push of encouragement.

We meet the sweetest member of the Dante’s…

And the creepiest member. 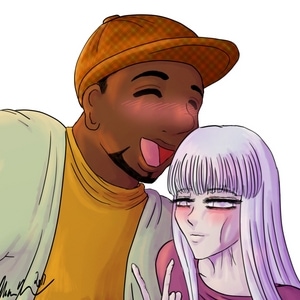