Samara stirred to a knocking sound, and stretched, opening her eyes. Oh, that wasn’t a dream. I am still in the palace. She slid out of bed and staggered to the door, composing herself as she went. She opened her inner door and walked into the outer room. Ethan was standing there.

“Good morning, Samara.” Ethan sounded mildly amused, and his blue eyes were twinkling now. The sunlight was filtering in the windows to shine on his dark hair. “I hope you had some good rest, but we do have things to accomplish today.”

How much have I overslept? Samara asked cautiously, “What then, is my first responsibility?”

“First, we were going to begin physical combat training. But, I have been scolded by Asa for not feeding you properly yesterday, so I figured you might like some breakfast.” Samara glanced over and realized he had set tea and food on the table. “I thought I would talk to you while you ate, but it looks like you also need to dress properly, and given your behavior last night, I’ll assume you don’t want company for changing.” Samara blushed. “I would be happy to help you, if you need any assistance, Samara.” Ethan’s slight smirk slowly turned into a grin. “You’re very easy to tease, Samara. I’ll be outside near the stables when you have nourished yourself and dressed in a clean uniform.”

What have I gotten myself into? Samara wondered as she sat alone, preparing for her day.

Cautiously, Samara slipped out of her room and into the sunshine. She walked carefully across the grass and approached Ethan from behind. As soon as she got close, without warning he whirled around and pinned her to the side of the stable with a short knife at her throat.

“E-Ethan?” Samara gasped. Ethan’s blue eyes were back to ice again. “What are you doing?”

“I could do anything I wanted to, to you right now, Samara. Anything.” His voice was stern and scary.

What have I gotten into?

“You represent the Queen and therefore you must be everything the Queen must be. There are a lot of cruel people in this world who would love to defile you, but you must keep chaste like the Queen does. How do you intend to defend yourself and keep me from taking what I want from you?”

Is this hypothetical, or does he actually want to take something from me? Samara was speechless.

After what seemed like an eternity of trying different weapons, Ethan seemed satisfied. “We’re going to start you on this.” He handed her a pole.

“Yes. This staff is going to give you what you need right now. Hold it like this –“ Ethan came up behind her, pushing his body firmly into her back and wrapping his arms around her to place her hands evenly on the staff. “Good, stay like that and don’t move.” Ethan pulled his short knife out again and reached around her with it. Samara flinched but did not move her hands. He reached to where her hands were and cut grooves on both sides of where her hands met the staff. “Now you know where to keep your hands even if I don’t put you into position.”

Ethan is so hard to read. He shows me that he can abuse me if he wants, but then he seems gentle. Tells me to keep my place and keep men away but then holds me from behind.

Ethan began leading her through simple drills until she suddenly dropped the staff.

“Up, guard.” Ethan’s voice was cold and he swung his staff under her chin. “If I had a bladed staff this would be the end for you, Samara. You can’t just drop the staff.”

Samara knelt on the ground. She tried to keep her hands from shaking enough to pick it up and couldn’t. Ethan sighed and walked away.

Is he giving up on me? Samara wondered. I have to figure this out. Lost in her own thoughts, Samara didn’t hear someone else approaching her.

“Samara?” There was Asa’s soft voice. “Are you all right?”

“Why don’t you stand up and let me see your staff then, Samara? Looks like a good fit for you.”

Asa sat down next to her. “Ethan told me you were done.”

The silence was oppressive, until Samara broke it. “Asa?”

Samara held out her hands. “How am I going to learn to protect myself when I can’t even hold anything?” 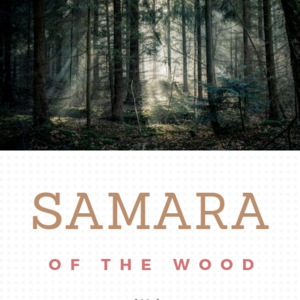