A sharp puff of air was released from Ira's lips, followed a growl. "I don't like what you're implying." She sat up, glaring, "My brother loves that shit, so we end up watching it."

Tristan looks towards the side, that smirk remaining, "Oh, I see, so you were held hostage when watching them."

"Are you teasing me?"

"A little." He thumbed through the pages of the book, "You may like this one though. It does have a lot of action, and it's fast-paced. Would you like me to tell you about it?"

She sighed, looking down at his book, before looking into his eyes. They were nearly sparkling, joy emanating from them. She tilted her head to the side, curious now, before getting an idea, "Why not read it to me?" She gave a toothy grin, "Maybe if I hear it in your voice, I'll be less likely to make fun of it."

His eyes widened, surprised, "You want me to read to you?"

A little bit of disappointment hit those red eyes, followed by embarrassment. Ira lowered her head to the table, resting her cheek against her arm, tempted to hide her face, "Why? Are you too far into it?"

He looked at his book again, checking to see which page number he was on, "I don't mind." He looked over at her, seeing a bit of wistfulness in those eyes. Though it was a grown woman asking him that, he wondered if anyone read to her at all. He gave a little smile, "As long as you reserve your scathing comments until the end of the first chapter."

Ira laughed softly against her arm, "No promises."

He gave a mock gasp of shock, before shaking his head with a slight chuckle, looking towards the interior of the cafe, "Looks like the couch is open. It may be more comfortable for us."

She blinked, looking over to the sectional facing the brick wall with the mantle of a fireplace, "Fair enough."

She was about to stand up before a hand moved into view, his long fingers extended towards her. She paused, her eyes widening for a moment, that memory returning.

A hand in the light that was just outside of her reach.

Her right hand gripped the table, trembling slightly, an old wave of fear crossing her mind.

"Coming?" His voice, soft, gentle, pulling her back into the present.

Ori was safe. She was in no danger here.

She gave a soft chuckle, shaking off that useless memory, her hand letting go of the table to take hold of his "Of course. I must've been drifting a little." She stood up and gave his hand a soft squeeze as if testing his grip.

He squeezed back, giving her another gentle smile before leading her into the interior of the cafe. As they stopped before the large sectional, Tristan let go of her hand, giving a little bow, "After you."

Ira gave a soft scoff, rolling her eyes, "The charm never turns off, does it?"

Tristan gave a little smirk, his tone having a flirtatious edge. "For you? Never."

She groaned, shaking her head before taking a seat. She felt herself sinking into the thick heavy velvet cushions, leaning her hand back against it. She released slight yawn as Tristan sat down next to her before shaking her head quickly, sitting up. The couch was a little too comfortable, a trap that threatened to pull her in like quicksand. She bit her lip a bit, rubbing her eyes before turning towards Tristan, seeing him open the book to the first chapter. Her eyes stayed on his face, on those lips, on that dusting of peach against those porcelain cheeks. His voice was as soft and as comfortable as the cushions they were sitting on. It was like air, and it was soothing as he began the first chapter. Another trap; a lullaby. Her eyes lowered down towards his chest and shoulder, biting her lip, "Tristan."

He paused, looking over at her, "Yeah, Ira?"

Seeing his eyes on her made her feel...shy. It wasn't an unpleasant feeling, but she made sure to keep her eyes on him, gathering strength. "My head feels a little heavy. I'd like to use your shoulder."

He blinked, before his eyes softened, long lashes fluttering a bit over those sapphire depths. He moved the book onto his lap, opening his shoulder to Ira. "Go on ahead."

She moved closer to him, leaning against him, so her head was underneath his chin. She was pressed tightly against him, needing to use his side for stability. When she was finally situated, her head pressing against the right shoulder, near his chest, "You may continue."

A little bit of the vulnerable side of Ira becomes apparent.

A side she always hide but is willing to show to Tristan. 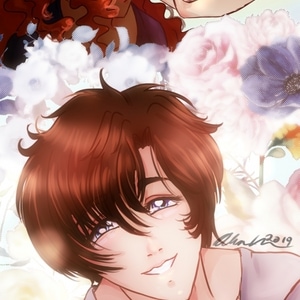