That fist stopped mere inches from her tightly closed eyes. Ira chuckled in triumph, still looming over her small prey.

Cana gave a soft whine, feeling the tension dissipate from the air and slowly open her eyes.

Only to hiss between that flick on her forehead. Cana jerked back, her hands moving to rub that sore spot, whining again, "OW! Fuck you, Bitch! No fair!"

"So...that croissant is mine." Ira stood up, giving a little hiss as she used her right arm to pull off the useless remains of the prosthetic, tossing it over the wall.

Cana sniffed, pulling her knees to her chest, a dark cloud looming overhead as she processed the defeat that weighed on her shoulders, "251 losses...life sucks."

Ira snorted at the dramatics, giving a little shrug, "Perhaps I'll give you half? You did earn it."

The young girl sniffled in surprise, rubbing her forehead as the cloud began to move from her eyes, hope glittering bright, "Really?"

Ira smirked, giving a low laugh, "Actually maybe not. I should give it to Sybil...she was the one who made that new rifle of yours."

"That's not fucking fair!" Cana pounded the ground, standing up with indignation, "I was the one aiming!"

Ira tilted her head to the side, her eyes rolling up a little, "Oh? You seemed to miss me by a large margin..."

"BULLSHIT! I had you! It's not my fault you're a god damn monster!"

Ira tilted her head to the other side, her lips curling up again to give Cana a toothy grin, "A monster, huh? We're a family full of monsters."

Cana stuck out her tongue, "Yeah, right, you're the real freak here! Taking my favorite croissant! You know I like strawberries!"

Ira shook her head, looking down over the wall, her sensitive ears picking up calm footsteps. She blinked before chuckling again, giving a little smirk as she noticed someone walking towards them. She took in that tall figure, walking with a smooth, suave step, as he always does. "I believe the prodigal son has finally arrived..."

"DARRION!" Cana squealed with delight, shoving Ira out of the way to take a peak. She jumped up and down with excitement, her distress almost forgotten along with how desperately she wanted the last croissant, "Finally he's back!" She turned to run past Ira, before yelping as the older woman grabbed her by the back of her shirt, "Bitch! Let me go!"

Ira gave her a low laugh, looking down the wall, "I know a quicker way down..."

Unfortunately, there no pleading with the fiery woman as she suddenly leaped from the wall, bringing the young girl down with her under her arm. Cana screamed as they were falling, a sudden fresh wave of fear fixed with the sudden realization of her mortality coursing through her. Ira laughed as they fell, looking towards her target, "HEY DARRION! CATCH!"

Cana soon found herself gripped by the back of her shirt, before being launched directly towards the suit-clad man waiting for them.

Darrion purple eyes widened in surprise, then horror seeing her sister falling towards him. He had barely any time to think before he jumped up, his arms opened wide to catch the young girl with impeccable timing. He released a gasp of air at the impact, the wind knocked out of him as he successfully caught his sister, pulling her close to him, "Jesus! Boss, what the fuck?!"

Ira landed shortly after, still laughing with manic glee at the dangerous act, "Oh please, like you wouldn't have caught her."

"That's not the point..." Darrion sighed a little in frustration, looking down at his trembling sister, her large eyes watering, and her nose red and running. He gave a tight-mouthed smile, rocking her a bit, "Hey there doll, calm down. I'm here."

Those eyes blinked and then shifted up to look up at him, her lower lip quivering before curling upwards, a big smile gracing her face, "You're back! You caught me!" Her arms wrapped around his neck, and she began to sob dramatically, "You saved me! She was so mean! She almost punched me! She tore holes into the fort! She wouldn't let me have the last strawberry cream cheese croissant!" She pulled back away from his neck, the waterworks heavy in this act, "The one from Monty's...with the perfect mixture of jam to sweetened cream cheese...she wouldn't let me have it!"

Darrion sighed, his eyes narrowing into a glare of annoyance towards Ira, one loose blond strand from his sleek and controlled hair falling over his eyes. A corner of his lip twitched a bit as the woman merely shrugged, her hand moving to flick her thick curls off her shoulder. He looked away, trying not to notice the thin sheen of sweat over that dark and muscular form, or the beads of liquid that hugged along the exposed valley of her chest.

Of course, her tank top would be loose cut, and he would notice like an idiot.

He looked back down at Cana and gently set her down, "Well, it may not be Montys' croissants, but..." He lowered his head down, his voice in a low whisper, "I have strawberry jam-filled doughnuts in the big kitchen." Seeing those bright eyes light up, he gave her a gentle smirk, patting his little sister on the head, "Though you better hurry before Orsin gets to them."

Cana gasped in outrage, "You left them with the fat ass?! Don't be dumb like the Bitch!" Cana turned towards Ira, sticking out her tongue as she began to run towards the Manor, "One of these days, I'm gonna fuck you up!"

Ira gave a little wave at Cana, laughing again as she got a middle finger in return. She shook her head with a slight shrug, the middle finger being the familiar wave goodbye between the two family members.

She looked over to Darrion, tilting her head to the side to stretch out her neck; a loud pop is heard as the tension entirely left her. To be honest, it seemed that ever since she had met her angel, the stress has been lessening day by day. She was even sleeping better since the morning, she napped on his shoulder.

Was this what her brother, the silly romantic that he was, meant when he gushes about soul mates?

She gave a little smile to herself, recalling Tristan's' warmth, how comfortable she felt against him, how at ease. Her mind drifted to the smile on his soft pink lips when she finally woke up, promising that he'll start the story over for her. Those eyes shimmering much like the sun on the oceans' current...

Another average day at the Dante Manor. Poor Cana lost…

Also introducing another Sin of the Dante Family! Meet Darrion. 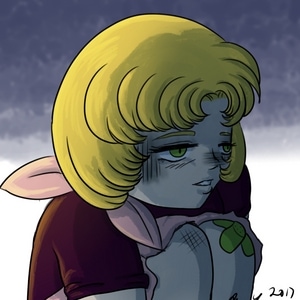