It was a little flick of her forehead that got her attention. The move was similar to what she did to her miniature opponent. She blinked before her eyes narrowed, leveling a glare into the violet eyes of Darrion, "Rude. I had a pleasant thought."

He grunted, giving her a slight scowl, making sure to move that loose bang back from his eyes. "That's unsettling. Orsin mentioned that you seemed a little more upbeat than usual." He raised an eyebrow before smirking, "He acts happy, but I can tell it's weirding him out."

She rubbed her forehead in annoyance, still holding her glare, "Indeed, well, he better be happy with all the pastries I have been bringing from Montys'. I'm spoiling him and your sister too much with them." When the sensation of the flick finally wore off, her gaze softened a bit. Not even that little move could snap her temper. "Welcome back, Darrion."

Darrion scoffed, trying hard to not blush to see that warm, but annoyingly platonic gaze. He lifted his arms up in a stretch, the holsters of his gun hitting the sides as he did so, "Good to be back." He sighed, rubbing the back of his neck, trying to massage away some knots. "Lots of late-night patrols. Several gang fights to break up. Several stakeouts for our little pest problem." He loosened his tie a little, feeling a little more relaxed back home, either despite the chaos or because of it.

"Ah yes...have our nuisances been bothering our 'partners'? Edward hasn't complained again over delays." She walked back towards the fort wall, giving a slight grunt as she pulled the club away from its stone grasp. As it was freed, she turned away to walk back towards the Manor, ignoring the various workers coming by to clean up the debris.

"The boys in blue and I have been making sure to keep an eye out on our shipments." He chuckled, "Somehow, having a squad car near operations makes it look legitimate." He looked over to her, keeping pace, "Or maybe you scared them off after that first night, Boss."

Ira looked down, her left shoulder feeling a little heavy, a memory weighing it down, "I doubt it."

Darrion yawned before he continued, "Well, we are sitting pretty so far. However, Knolls had one of their 'trades' delayed pretty severely."

Darrion paused a bit, his lips closed tight. The Knolls family was a powerful ally under their umbrella, with the boss man himself having his fat fingers in unsavory dealings. He waited until they stopped before the side entrance of the Manor. The guards bowed their heads before taking hold of the bronze handles, pulling open the heavy wooden doors for them. Once inside, he intelligently waited until Ira gave the massive club to a large and heavyset Butler, finally continuing, "Slave trades. Apparently, he has a business in young women."

Ira paused in her step, her head tilting side to side as she processed the information. A clicking noise echoed throughout the hall, the sound of Ira's tongue pressing against the roof her mouth in irritation, "Disgusting. The fat bastard deserves the setback." She clenched her fist before realizing something amusing, "And it was our pests which caused it?"

Darrion nodded, feeling relief wash through him as that fact was enough to make her laugh, "I hope you're not thinking of thanking them."

"Fuck, no! That's' hilarious!" She snickered with glee releasing a signature snort, "Knolls was always an unsavory pig, so karma being a bit of a bitch to him is amusing." As they walked, the lights begin to dim, a blue glow emanating as they were reaching their destination, "Tell me you have more details on this."

"I already handed off the reports and evidence to our men. It should be reaching Edward now." He stepped into the large security room, stepping over a few stray cables, "Also, I believe our genius may have kept an eye out for us."

A drone hovered towards them, its lens zooming in and out as it took in Darrions' chiseled face, before nodding to it in recognition and beeping in greeting. Darrion leaned his head back warily, having spent far more time undercover as an honest cop than in the Manor.

Ira chuckled at his discomfort; patting him on the chest with the back of her hand as she spoke, "Well then, let's see if I can take another look at our 'heroes.'"

Darrion made sure to keep the warm glow on his cheeks hidden as he watched her large hips shift side to side. She sauntered over to the large monitors, the screens embracing the walls from edge to edge. He cursed himself silently for being affected by that little touch. He ignored how she looked in those damn, tight leggings as he followed her, going on the right side of the large chair holding their genius.

The genius, Sybil, didn't move her head to look at the two, sensing Ira on her left side. She gave a soft, weary sigh at the sudden intrusion. "Crowded."

Ira gently patted the chair, giving the frail woman a sly smirk, "Only for a little while Sybil. You have something to show me from last night."

Sybil slowly turned her head towards Ira, sighing again, a little puff of annoyance escaping her thin lips. Drone hands moved from underneath the control panel, typing onto the keyboard. Two monitors began to change locations, navigating through different corners, ports, alleys, and warehouses of Monterose. Finally, one monitor stopped at a shipping yard, displaying the present emptiness. One hand moved to turn a dial, and then the same location seemed to extend from the monitor until each one revealed a part of the area, each monitor a piece of the puzzle. Another dial was turned, and soon it was on rewind, the image moving backward in time with rapid speed.

It was a bit dizzying to Darrion, still having to get used to the technology surrounding him. It felt like the police he had infiltrated and immersed himself would always be ten massive leaps behind. He looked, trying to distract himself before he nodded to Orsin walking towards them.

The much larger man was holding a plate of diced strawberry jam, crystal sugar doughnuts, probably to share with Sybil. Orsin moved to stand next to his sister, looking up at the screen. He seemed confused at first, only to settle down when the time travel finally stopped to a point last night. "Why are we looking at this?" He turned to his older sister, her eyes focused on the monitor.

Those bright gleaming eyes didn't even blink, her lips tightly pursed as she watched, barely remembering to answer, "Our pests returned. I wanted to take a look." Her voice had lowered an octave as she became focused, a slight growl in them as she recalled the first night she met these two. The rumble was not of anger or frustration. Instead, there was a pleasing edge as the adrenaline of the memory returned.

Orsin looked away from, uncomfortable with that focused stare. There was something that always unsettled him when she had that gaze when she held that bloodlust. He tried not to think back on it, preferring to stay away from the burning ashes of their shared memories. He moved the plate over to one of the drone hands, smiling as the steel limb picked up a small piece to give to Sybil, who was quietly observing. At least he was able to push those memories away; at least he had someone to help.

He only wished he could offer the same to his sister.

Have you noticed that the Heroes end up helping the Big Bad by taking out all the little evil rival and mooks?

It happens quite a lot in movies and animes.

Ira is quite pleased about that.

I feel like there’s so much crammed into this episode. Their group dynamic is pretty fascinating ✨ 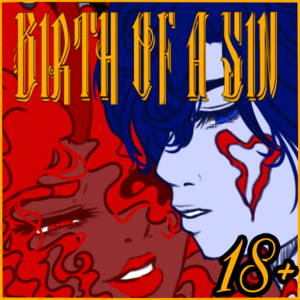