Inho felt raw. His emotions were flayed red and out for all to see. He couldn’t muster a real smile to save his life, and his fingernails were chewed down to the quicks. He didn’t have the energy to organize going back to Korea yet, nor did he know how to break the lease on his apartment. Perhaps signing a year's contract for a failing relationship had been a mistake.

Life went on though, and so did work. Jasmine was back from her vacation and had been fielding his sad drunk calls for several nights now. This had brought them closer together in a way that only supporting someone through a terrible event can. Judging by the way that Nathan looked at him with soft eyes, and offered him occasional supportive shoulder pats, Jasmine had told him, too.

The restaurant was a sort of refuge from his thoughts now. He felt like the staff were the only people left in Vancouver who knew who he was and didn’t hate him. Each day, he looked forward to his bike delivery shifts to end just to get to work serving. The harder he worked the less he thought about Jamie, her cold words, and her expressionless face.

He kept going to text her, had even sent her a desperate drunk message or two, that he didn't want to think about. But, whenever he meant to message her in earnest, to talk, he’d think of how she’d said he had nothing to offer. The worst part was that she was right. He was holding her back, dragging her down to his own failing level. Had she always felt that way? That he was unnecessary baggage to her, and the shame of his mediocrity grew heavier the longer she hauled him around?

She would date someone better now, someone with a good job and a proper education. She would probably date Stephen. If Stephen hadn’t interrupted them back at his apartment, maybe this wouldn’t have ended up such a mess – but no, this was his own fault. Guilt and self-hatred seeped out of his pores with last night's beer, and somehow, Stephen was the only person he could hate that wasn’t himself.

Inho was irritable, and hungover, and had started smoking more with each passing day. It was Friday evening, and he was on his way back to the kitchen from a smoke break, retying his apron when he walked past a table of white businessmen. He caught a snippet of their conversation,

“This place is good though, I swear. Authentic. I love these yellow noodles.”

“I’ll take your word for it, this place doesn’t look Italian,” The man talking gestured to Jasmine who clearing a table nearby. “It’s just a bunch of Chinese here.”

The speaker locked eyes with Inho, then immediately looked away. Inho noticed Jasmine tense up where she was clearing a table. She heard them too.

“See? How authentic can it be?” he tipped his head in Inho’s direction now, careless that he was in earshot.

“What are you trying to say, sir?” Inho stopped and took a step towards their table. His patience and restraint were shredded, barely there at all. He was aching for a fight. He knew it was a bad idea, and he didn’t care.

The man looked at him, considering, “This is a private conversation.” he said, then, “but you’d think if they’re going to say it’s authentic Italian, they’d hire some Italians.”

Inho’s fists clenched at his sides.

“Sounds like you just don’t like Chi–” Inho was cut off by Jasmine lightly hip-checking him towards the kitchen, away from the table.

“Our restaurant was founded 30 years ago, by an Italian immigrant family. Their grandson is now the owner,” she launched into the speech about Nathan preserving his nonna’s recipes, and behind Inho’s back she pinched him hard on the hip. It hurt and he took the hint, stalking to the kitchen without another word.

He still had that adrenaline rush that comes with preparing for a fight when he came back out to address the newest table seated in his section. It spiked higher when he saw the new patrons, and tension washed through him with scalding heat. Stephen was sitting in the booth, smiling at a slim teenager.

He spun on his heel and marched back into the kitchen, Jasmine was already there and grabbed him by the shoulders.

“Try not to start shit in here, eh?” she said, then examined his ghost-white face. “What is it? What’s wrong?”

Inho took a deep breath, he was getting out of control tonight, he could hear it in Jasmine’s tone. They were both used to offhand comments about their race in this city, he had no reason to be taking this one so hard. He shook his head at her, trying to shake off the feverish flush of tension. He didn’t want her to think he was going to fight with Stephen. Which, if he was being honest, he was probably about to. His blood was boiling at the thought.

“I’m good, I’m good. Everything’s fine. I’ve gotta greet the new table.” He turned from her suspicious eyes and smoothed his hair before heading back to the front of house.

When he walked up to Stephen’s table he managed a fake cheery voice to welcome them. His eyes searched Stephen’s surprised face first, then he turned to examine the teen. He looked about 16 years old, though Inho wasn’t good at guessing caucasian ages. He had pale skin, that turned pink on his cheeks, around his eyelids, and the tip of his nose. Icy blue eyes under black hair made him striking and unearthly. What the fuck did Stephen have to talk about with this angelic child?

He fixed his sight back on Stephen’s face.

Before Stephen could reply, the teen bounced out of his seat.

“Gotta go pee!” he announced. “You pick for me, Stephy”

“Yes, Stephy. Why don’t you pick for your date?” he loaded every ounce of venom he could into the words.

Do you have any questions for Inho, Stephen, or Jamie Q&A style? If I get 20 questions, I'll make a Q&A!
Like and comment pinecones! Did you know that your likes and comments impact where stories get shown on Tapas? Give your favorite creators some love in the form of engagement! 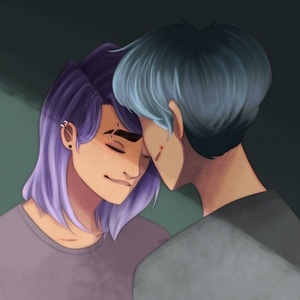 oh gosh, inho no it's his nephew;; hahaha 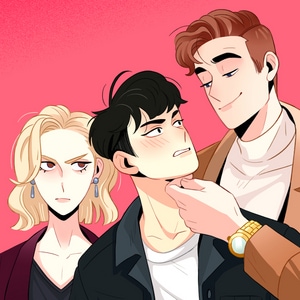