The man had only finished wiping me clean and carefully wrapping a cloth diaper around my bottom when my lungs flattened again. This time the cream went over my whole body. What an exhausting way to start a life. I cried not because I actively willed it, but the overwhelming chaos of this day of existence wore me to mewling howls of pure, desperate emotion. Finally being swaddled in the cushiest of blankets soothed me to silence. I sighed against the man’s soft shoulder as he carried me across the room.

Familiar. That’s what the entity had promised. My form, still a feminine one as proved by the cleaning process, and the form of the man came off as human enough. This room though...well, I couldn’t say much about it due to my poor eyesight. Anything beyond a foot was stolen by the fog while even the closest people produced nothing more than fuzzy blobs cascading ripples in various shades of gray as they moved. Still, the room came off contrary to what I expected. It didn’t smell like a hospital at all. I heard no machine beeps, I wasn’t being put in an incubator or connected to a ventilator, and that unknown language the area quietly buzzed with was another curiosity.

Honestly, only one conclusion could be made. The entity said it was no known god upon my world. There was the proof in plain words, but even without that it wouldn’t have made its promise of familiarity if there weren’t any non-familiar options out there, if Earth was the lone choice. Thus...I was not on Earth.

Concern over that glaring reality was halted by another. Crying continued though I made no noise. I caught a glimpse of the incredibly important reason I was so small as the man placed me upon a cushioned surface. There rest one baby. Then a second. Then a third.

I was baby number four.

The one next to me was the source of the wailing. I closed my eyes processing the revelation only to permit a sliver of vision upon the approach of two new figures.

“The...frail...Syara’s...unexpected...worrisome...now,” the new man on my right explained something to the person on the left. He pointed to my siblings and I in turn. “Your...hair...daughter. Two...princes...identical...difficulty. Youngest...scare...fraternal.”

Trying to reason why I could understand anything was pointless, but this man spoke enough to have me hazard a guess about my siblings. If we’d been placed in birth order, the oldest of us was a sister. Following her came two identical boys, and last was me who was fraternal to the other girl. That was all well and good. However, I must have heard the one word wrong. Princes? Like, the royal kind? No way. Then the left figure leaned close and stared deeply at us one by one. I saw the outlined shape of a striking male face and the gentle curls of dark hair. Any other features were too blurry to discern.

Not a mistake then.

His tone comforted while love filled his speech. If he wasn’t our father, I’d be surprised. He left though, and into the arms of a woman I went. She wasn’t my mother. Her stomach was too flat for that. Something about her, much like the cream, bathed me in the caress of radiating spring sunlight. It beat back the winter-like chill seeping through my fragile skin. Any peace was lost when I soiled my diaper for the first time, humiliating, before falling asleep. I woke with a stomach empty and moaning. Forcing myself to wail, I silently pleaded to be given a bottle yet found my face smushed into a different woman’s breast instead.

I wasn’t going to let myself starve to death, but such an ordeal was awful, awful, awful! Why couldn’t my memories at least be suppressed until I grew older? Didn’t that make more sense? I ate as quickly as I could, burped up half of the meal onto a shoulder because of that, soiled myself again, and drifted off in a cycle that would become all too routine in the coming days.

Being shifted into another’s arms bumped me to consciousness. I only whined for a moment. Two of my siblings were going at it— no need for me to cause more grief. This was an important moment too. This father of mine who was a prince sat on the edge of a bed leaning against the woman who propped my sister and me in her right arm and our two brothers in her left. Her mere presence dragged me in with an attachment and longing that dominated my core. Having heard before of infants knowing their mother’s voice from the womb, I had to gather this body of mine instinctively recognized who she was.

“I’m...mother,” she spoke tearily, tenderly to confirm it.

I mewled, and she kissed the side of my head. How I wished I could see better. The poor thing sounded rightfully exhausted, and I worried what it meant that it took over an hour before we could be reunited.

“No. Renira...I...sure,” Father said adamantly. He gently ran a thumb over my sister’s head. “Heather Vittoria.”

“Theodorus Rannoch,” Mother pressed a kiss against my oldest brother.

Ah. We were getting our names.

Then the couple whispered and deliberated. It made sense that they might not know how many of each kind of name to prepare, or maybe whatever names they had prepared didn’t suit my appearance. Thankfully, they didn’t take long. Father made the announcement. 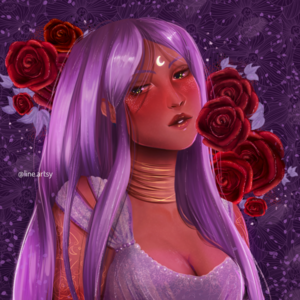 That was interesting! Can't wait to read the rest! 😊❤️