The walls of the hospital ward were the colour of the television, tuned to a dead channel. Every inch was draped in a bleak, muddy white, cracks seeping menacingly through the plaster and peeling like dry skin. It was a familiar sight to Axel Guevara – in fact, he woke up to the same mundane scenery every day.

Melancholy, the boy stared longingly through the window, which was barred like those of a prison cell, contemplating his futile existence. Wiry ebony black hair hung helplessly from his head, his ocean eyes coated with salty tears. His figure was slim and worn despite his ripe age of 18 and his long, thin, branch-like fingers curled desperately around his waist.

All was silent for what seemed to be eternity before a low, gentle hum shook the ground lightly. Axel stretched his neck, straining to see more from the window, coming close to falling off of the hospital bed as he does so. Through the paltry gap of a window, a wide cityscape was revealed: miles beyond miles of unattractive buildings, somehow gloomier than the weary hospital. Turning his attention to Jabberwock High, a crowd of pea-sized teenagers stood squashed together outside, forming a crescent shape. Shifting his eyes a little, he discovered a small yet strangely comforting stage set-up.

Without warning, with a roar from the crowd and the sporadic flashing of colourful lights, the pulchritudinous sound of a skillful guitar solo echoed throughout the city, shaking it harshly with a tenacious pride. If the boy hadn’t fallen from his bed the first time, he had now.

Milo played with vigour, thoroughly enjoying the sense of overwhelming power he gained when his fingertips collided with the guitar strings – he felt as though he was flying. It was the roar of the crowd that gave him heartache to sing, and the encouraging smiles from his band mates that gave him the intrepidity to rattle the gritty tarmac floor on which he looked down upon. With each forceful strike of his wrist, his bright emerald hair danced along with the rhythm, hand in hand with the frigid winter breeze. Violet eyes glittering in the daylight, Milo glanced over at Zach, the lead singer and ‘father’ of the group. Zach catches his eye and smiles at him reassuringly, winking at him. Milo winked back enthusiastically.

Grabbing the microphone and holding it to his mouth, he let out a shout, raspy but direct. “Are you ready?” he addressed vociferously to the eager audience. At the sound of excited screams, Milo struck the first chord and sent out a wave of cacophony, a riveting sound that immediately snatched the attention of anyone in close enough proximity to hear it. Following up from that: Oliver slammed the drums with force; Xavier struck C on his electric keyboard; and Zach began to sing. They started off strong with their most popular song: Let’s Be Fools. A classic rock song which followed the perpetuous line of other popular rock songs, making it easily lovable. Only a few words in and the audience is already on their knees, begging desperately for more. One member of the audience, far away from the school though they were, was much more captivated than the rest.

Much to her absolute and utter horror, Nurse Amy entered hospital room 101 with a tray of medication in her hands, only to discover the patient had somehow made their way out of the hospital bed and onto the cold, marble floor.

“Good heavens, Mr. Guevara!” she exclaims. The boy in question turned his head to face her and formed a tight, awkward smile on his face. He argues not as the nurse meticulously picks him up from the floor and eases him onto the bed again.

“What on earth were you doing on the floor?” she asks.

“Fell off!” she shakes her head, tutting as she places the tray down onto the neighbouring table, “What you were doing to result in you falling off, I do wonder.” Axel shrugs as if he didn’t know himself and instead listened carefully to the noise outside.

“Do you know who they are?”

“The ones playing at Jabberwock High.”

Nurse Amy let out a small gasp, as if she’d miraculously reached an epiphany. “That’s Little League”, she explains, “They’re a fairly new group, but are getting a lot of recognition that’s for sure.”

“Little League.” Axel mumbles to himself, as if testing the taste of the word on his tongue. “Who’s the guitarist? Their skill is impeccable.”

She ponders on this for a while – she hadn’t really memorised the names yet. Mike? Mason? Mi… Mi… Ah!

“I believe his name is Milo. Milo Stär. A fan favourite – if I am correct. I heard they’re having another concert at the nightclub, ‘pparently this Milo fellow is giving a speech.”

After ‘juicing him up’ with medication – as Nurse Amy calls it – she leaves the room, taking the tray with her, waving a jovial goodbye as she closes the sliding door.

Axel is left alone with his thoughts for a while, still rolling ‘Little League’ and ‘Milo’ on his tongue. It was unfamiliar to him, but he didn’t dislike it. A concert huh? He wanted to see them in person but being hospital-bound made chances of that near zero. But only near zero. There still lie a slither of chance.

And he would take it. 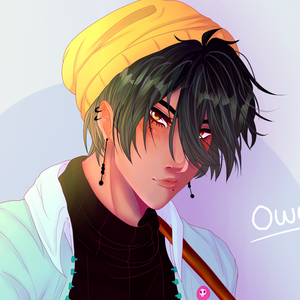 yes ive made another novel because im impatient 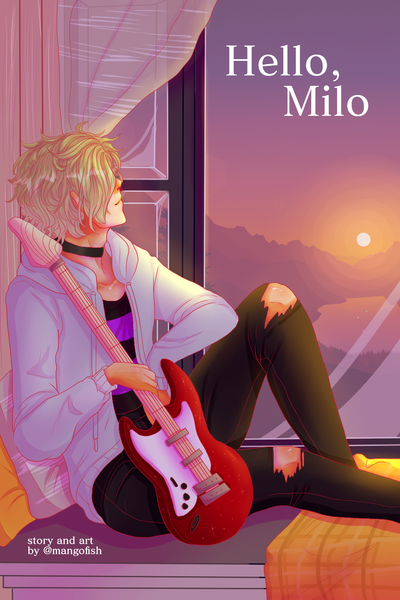 Milo Stär is the lead guitarist and vocalist for the up-rising band 'Little League'. During one of his school concerts, he comes to an unlikely encounter with a sickly, hospital-bound boy. Milo is determined to save this boy from his mundane life, even if it means dropping out of the band.
Subscribe 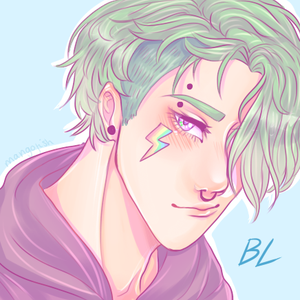