The ziki leader was small, around the height of an average male, but the aura he gave off was leagues above the other ziki.

A confused Chaus watched all of this unfold.

A voice so raspy that it was almost painful to listen to reached Chaus. “I. Will. Fight. You. In. A. Duel.”

Chaus didn’t know the ziki could speak, but that was normal because only powerful ziki like the ziki leader could speak.

A devil’s smile emerged on Chaus’s face. He was getting tired of killing small fry. This duel suited what he wanted perfectly. “Today will be the day you die,” Chaus snarled.

Hellfire erupted on Chaus’s spear and he attacked the ziki leader.

Chaus swung his spear in an arc, aiming for the ziki’s head. The ziki stepped back and faded away into the darkness. Chaus’s eyes opened in surprise. He didn’t know the ziki had this kind of ability. His spear hit nothing but darkness.

Chaus’s eyes narrowed. His spear wasn’t able to hit the ziki while it was one with darkness.

The ziki started to move. It was difficult seeing the ziki since it was one with darkness, but Chaus’s vision was enhanced so he could make out the outline of the ziki. The ziki moved to the side of Chaus and slash at Chaus with a claw. The claw glistened in the darkness and radiated darkness. It was dangerous.

Chaus instinctively used his spear to block the claw. Claw and spear clashed and shockwaves were sent through the air.

When the ziki attacked, it went out of its elusive state.

The ziki submerged back into the darkness and circled Chaus. Chaus watched the ziki, prepared for any that came at him, or so he thought.

Chaus felt a tingling sensation near his leg. The darkness was moving and crawling up his leg. Then it solidified and turned into sharp spikes that penetrated his leg all the way to the bone. Chaus grunted in pain.

His right leg was completely tarnished. Using Dragon Steps was no longer an option and he needed to kill enemies for the Asura body to heal his leg. He was in a tight situation.

Chaus manifested a barrier around him in hopes of blocking the darkness. It worked, but the darkness continuously ate away at the barrier. Chaus frowned and sent his two flying needles toward the ziki leader. The needles passed through the ziki leader like the spear did. If soul manifested weapons didn’t work, then maybe advanced magic would.

Chaus unleashed ‘Wave of the King’ and a large tidal wave submerged the ziki leader. Chaus almost missed it, but he saw the ziki leader being pushed back a little bit by the wave. Advanced magic worked.

Chaus unleashed ‘Meteor Shower’ and a barrage of meteors covered in hellfire flew towards the ziki leader. Meteor shower was twice as strong due to Chaus’s Asura body.

The ziki leader traveled through darkness, dodging the exploding meteors. Chaus noticed something while the ziki was dodging meteors. The ziki’s movement speed decreased as more and more meteors exploded.

So that’s how it is.

The ziki dodged Meteor Shower and sustained minor injuries. It looked at Chaus even more cautiously than before.

The burning fires from Meteor Shower were gradually snuffed out by the encroaching darkness, yet that didn’t matter to Chaus.

Chaus cast an enhancement spell on his flying needles, and his needles erupted in hellfire. His needles flew towards the ziki, and rather than letting the needles pass through him like the ziki leader allowed previously, the ziki dodged the needles. While the ziki was busy dodging needles, the darkness had completely penetrated Chaus’s barrier. It was a race against time.

The darkness crept up closer and closer to Chaus, but Chaus ignored it. Instead, he began channeling energy for a massive spell, ‘Fireball.’ A fireball appeared in the air above Chaus. It started out the size of a watermelon, but it gradually grew larger and larger. First to the size of a car, and then to the size of a three story house. The massive fireball slowed the darkness to a crawl, but it continued creeping closer to Chaus. At this point, it almost reached his legs.

Chaus sent his fireball flying towards the ziki leader. The ziki leader looked at the fireball and grimaced. The darkness crawled up Chaus’s legs and towards his heart. The needles began attacking more furiously.

The darkness had reached Chaus’s stomach, and the fireball slowed down the ziki to half its original speed. The needles had pierced the ziki’s legs and were on the verge of killing the ziki.

Dru watched intensely, ready to jump in at a moment's notice.

Nothing moved. Pure silence filled the area. Then Chaus gurgled out mouthfuls of blood. He fell down on both knees, choking on his own blood.

Right after Chaus gurgled out blood, the ziki leader erupted in a cascade of flames.

The darkness dissolved away from Chaus’s body. The hole underneath his heart began healing at a rapid pace, and his leg healed just as fast.

Chaus completed the first of many steps in his road for revenge, but he wasn’t satisfied. Rather than feeling joy, he felt angry. If the ziki leader was a little stronger, he would’ve died. He needed more power.

The air fluctuated beside Chaus, and Dru appeared. “The zikis follow the law of the jungle. Strength over all. Now that you killed their leader, they view you as their new leader.”

The edges of Chaus’s mouth lifted. He had complete control over the 200 or so zikis left. They would be incredibly beneficial towards his path for revenge, but Chaus currently had no use for the ziki.

A command came out of Chaus’s mouth. “Stand.”

The zikis stood up in uniform fashion.

“When I need you, I will call for you. As of now, live life as you normally have.”

None of the zikis moved. Chaus frowned.

Dru spoke in an amused tone. “The zikis have been living life with a leader. You need to appoint a leader in your stead.”

Realization dawned on Chaus’s face. He scanned the surrounding zikis and found one that caught his eye. The ziki was a little smaller than the stronger zikis, but the aura it emitted was more powerful than the other zikis.

Chaus pointed at the ziki he chose. “You.” The ziki stepped forward. “You will lead the zikis in my stead.”

The ziki bowed its head and spoke in a raspy voice. “As. You. Wish.”

“Good choice,” Dru praised. “This ones on the verge of turning into an elusive ziki.”

When the crystal stage is reached, the darkness can be manifested into solid objects, and the darkness stage is the stage the ziki is born into.

“So that’s what they’re called.”

A weird expression popped up on Dru’s face. “What have you been calling them?”

Dru mustered every bit of his self control to suppress his laugh. His face scrunched up and twisted into varying shapes, but eventually he burst out laughing.

“Your naming sense.” Dru laughed even more. “Is horrible.”

After a short while, Dru finally calmed down. He let out a large breath of air.

Dru chanted and a large magic circle appeared beneath the feet of Chaus and Dru. The air fluctuated and they were sent back to the cottage.

Chaus looked around at his surroundings, confused. Where was this? It was only after he saw the stone pillar that he realized where this was. This was where the cottage was.

The place was unrecognizable now. The cottage was gone and the green grass was replaced by grey stone. Transmutation powder ran on top of the stone and created thousands of intricate engravings and shapes. It looked like the work of a god. In the center of all this lay a dragon stone. This was a transmutation circle.

Chaus looked at Dru. “What is this?”

Dru responded without a waver in his voice. “I’ll be transmuting myself into you.”

“What?” Complete shock was shown on Chaus’s face.

An even more shocked 'what' came out.

Chaus’s emotions ran wild. Broke the laws of casualty? Will the world wants me dead? This was too much for Chaus to take in.

Chaus believed he was born in this world to correct it, but now he found out he was an irregularity who was never supposed to be born. He didn’t know how to react.

“Take some time to think about it, but remember, you were born into this world. Even if the world wants you dead, even if everyone is against you, you deserve to live as much as anyone else. So live, live and change the world. Become king.” 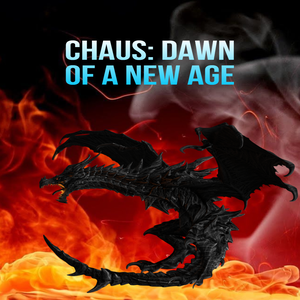