Fuchsia pushed the door open and walked into a dimly lit living room. She stopped abruptly, taking in everything she would be leaving behind. Sina, who was immersed in thoughts, stepped right into Fuchsia’s back. She stood there motionless; her head pressed into Fuchsia’s blouse. Exhausted from the days of non-restful sleep and stress, she finally let a few stray tears escape her eyes. Fuchsia didn’t move until she felt Sina stand up straight and wipe her tears away, she knew that Sina didn’t like showing her emotions. Fuchsia stepped forward avoiding eye contact allowing Sina to collect herself fully and told her that she was going to fix some tea to help them sleep. Sina walked to her bedroom, dropped her computer and jacket off and headed to get ready for bed.

Fuchsia could hear the shower running and she knew that Sina was going to be there for a while. She pulled the herbal tea canisters out to find what she was looking for: cinnamon, vanilla bean, valerian and licorice root. This had been a nighttime ritual that had been established early in their friendship. She reached for the tea kettle and turned on the hot water to fill it up. Hearing the sudden thud of metal on ceramic tiles in the bathroom, she giggled realizing what she had done. She grabbed mugs off the counter and reached in the drawer for the tea infuser balls. She sat down at the table, kicked her heels off, and stretched up to the ceiling as a yawn escaped her mouth. She crossed her arms on the table and used them as a pillow while she waited on Sina. Honestly, she didn’t need the tea to help her sleep, but she knew that Sina would need something to help her relax.

As she waited, her mind moved precariously between a sleep and wake state. Fuchsia thought back to when she first met Sina. Sina was 19 years old and extremely traumatized by her boyfriend. The man was an abusive controlling asshole who had tried to manipulate Sina. One day when he was drunk, he severed both her hands in a fit of rage. Luckily, a neighbor heard Sina’s screams and called for help. She was taken to a hospital that had connections with Eclipse Medical, where she was approached by Fuchsia and some other doctors as a possible candidate for one of their experimental procedures. Sina without question accepted their terms as she found her hands extremely valuable to her hobby. It took some time for her to heal from her injury as well as to become adjusted to her implanted neural link and custom fitted cybernetic hands. During Sina’s stay at the hospital, she was alone. Not one family member or friend visited her. Fuchsia’s heart ached for Sina, and she would often visit her and soon they became close friends. Eventually they also became roommates. Fuchsia would later find out that Sina was adept in computers, tech as well as hacking. All of which has been an invaluable resource during their time together!

She was making a mental list of what they needed to do in the morning when Sina walked in. Fuchsia stood up and picked up the tea kettle, steam rushed out as she poured both mugs half full. Sina sat down at the table and yawned looking sleepily at the mugs. Fuchsia scooped valerian and licorice root into one infuser ball and scooted it in front of Sina. The smell began to fill the room, Sina leaned over and breathed in the soothing scent that she loves. Fuchsia filled her own tea infuser ball with valerian, vanilla bean, and placed the cinnamon stick in it. She rolled the cinnamon stick back and forth as she said, “I have been thinking when all this is over that maybe we could go to Argos City.”

Sina’s eyes got huge as she filled with a surge of excitement as she said “Really? Do you really think we could?”

Fuchsia smiled at Sina’s reaction and said, “you have wanted to get out of this town for a long time. I know the only reason why you have stayed is because of me. Argos has much to offer for both of us. Maybe you could even go back to school like you have always wanted.”

Sina tilted her head and raised one eyebrow at Fuchsia curiously. “What has made you talk about Argos?”

Fuchsia looked up and said, “Argos houses one of the largest government medical research facilities.”

Sina drops her hand heavily to the table. “You said you didn’t want to go work for them! You said they would control your research development! I know how important your research is to you. So why?”

Fuchsia smiles and picks her mug up and says, “Because I want to protect my family and my research!” She slowly takes a sip of her tea and smiles again.

Sina says, “Family?” as her eyes begin to fill with tears.

Fuchsia reaches over and places a hand on one of Sina’s. Sina’s hand pulsates rhythmically as her neural link receptors acknowledge the touch. She quickly moves her other arm across her face to wipe away the tears.

Fuchsia picks her hand up and tells Sina to drink her tea so they can get some sleep!

Fuchsia almost chokes on her tea as she says, “Girl, I’m not much older than you! You better take that back.”

They both burst into laughter.

When they eventually stop laughing, Sina says, “Thank You!

“You have been there for me since you met me, and I thank you for that. I don’t know what I would do without you!”

Fuchsia smiles again, wiping tears from her own eyes, and says, “we are going to turn out to be the two crazy cat ladies when we get old aren’t we?”

Sina stops laughing and says, “what are we going to do about Nix?”

“Take him with us of course!” Fuchsia says with a large smile.

Fuchsia is definitely the "Mom Friend", she tries so hard to take care of everyone!
☕

If SoundCloud doesn't work and you want to listen to the music here is the link:
https://soundcloud.com/tommeeprofitt/tomorrow-we-fight-feat-svrcina?si=7cbb1f0c9084446e894e6aea319dca7f
or
https://youtu.be/BEZn3WmxJB4

What a heartwarming chapter! 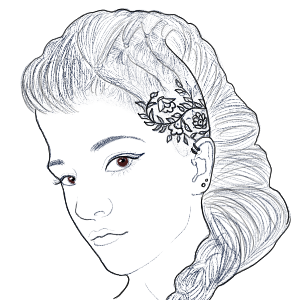