Bren walks all over his apartment, not knowing if he will see his belongings again. He had planned on packing some clothing and a few things he considered to be valuable to him. He grabs a suitcase and begins to fill it with clothing, not wanting to wait much longer. He hears movement and a mumble from behind him.

He turns and walks to the bed to check Jax, but he appears to still be sleeping. He sits on the edge of the bed beside Jax, intent on waking him up so they could leave soon. Jax lay on his side, his hair had fallen back exposing the scars on his neck and the side of his head. Bren reaches out, just barely touching them. The snakelike patterns etched their way around his neck and into his hairline.

The flashing light on the alarm clock catches his attention and he notices his sketchbook sitting in front of it. He reaches for it as it held some of his most important memories of his childhood. He shared his grandmother’s love for art, trying to reproduce what he found beautiful and interesting. He flinches remembering what one of the last sketches he had completed was. He hoped that Jax had not looked in the sketchbook and seen his drawing. He flips towards the end of the book to see the drawing once again.

His attention was solely on the book when he is unmercifully pulled into a passionate display of kisses by Jax. The book falls open as it hits the floor when Bren places his hands on either side of Jax’s face, intertwining his fingers in his hair. Bren pulls back only to see Jax’s eyes stare intensely into his, making him push all logic away. Lost in the moment he hungrily presses their lips together. Jax's hands mingle in the loose fabric of Bren’s shirt, pulling him closer. Their actions are soon interrupted by the ringing of Bren’s phone. The ringing phone brings Bren back to his senses as he presses his forehead against Jax’s chest and sighs. He sits up, takes his phone out and answers it.

Fuchsia says from the other side, “Good Morning Sunshine!”

Bren says, “God Fuchsia, you have the worst timing.”

Jax’s eyes get huge and he throws a pillow at Bren as he covers his face in embarrassment. Bren throws his arm up to block the impact of the pillow as he chuckles. He stands up, almost stepping on the book, as he quickly picks it up and places it in his suitcase. He steps out of the room as he continues to talk to Fuchsia.

Fuchsia says, “I wanted to make sure you two were awake and ready to go. I need you two to meet us at the lab in an hour. I have some stuff to load, and I need your help.”

Bren says, “I’m almost finished packing so we will load our stuff and head to the lab soon.”

Fuchsia says, “See you soon,” and hangs up.

Jax changes his clothes into some that Bren had brought over from his apartment. It felt nice to wear his own clothing again. His shirt drops on the floor near the wastebasket and as he reaches down to pick it up, he sees a crumpled picture. The picture was taken in what looked like a park. Bren was wearing a police uniform and his arm rested around a woman’s waist. They were both smiling and looked happy. Bren had short hair and was youthful looking. Jax’s stomach twisted in confusion over the feelings that he is having. He hears a vehicle blow a horn outside the apartment and feels like his ears are going to explode. His head starts throbbing as his mind races. He heads out of the bedroom in search of his pills.

He hurriedly passes Bren who is in the living room trying to close the zipper on the suitcase. He remembered where Bren had placed the pills yesterday and he reaches into the drawer quickly and tucks them in his pocket while heading back towards the bathroom.

He shuts the door without turning the light on, the eerie glow of a single night light solemnly lights the room. He looks in the mirror at his reflection and is hit with a flashback causing him to vomit. Sweat collects on his brow as he hears quick movement and a knock at the door. Bren’s voice sounds muffled as he asks if he was ok. He turns the water on as he shakes three pills out into his trembling hands. He replaces the lid and swallows the pills while quickly cupping his hands in the sink to get just enough water to ensure the pills wouldn’t get stuck in his throat. He slides down against the door as he hears Bren’s voice again. He manages to say, “I’m ok, I will be out in a minute, sorry!”

Bren stood outside the door waiting for Jax to come out. Finally, after about 10 minutes he hears Jax stand up and the door finally opens. Jax stands in front of him paler than before. His face and hair damp from sweat or water.

Jax simply nods and says, “I’m going to get my stuff so we can go.”

Bren worries something is wrong as Jax’s entire demeanor changed. He walks to the kitchen to grab his keys and a couple of last items, one being the bottle of Blue Cryo. He opens the drawer and realizes it is missing.

He looks back towards the bedroom, worried that Jax is in possession of the pills again. He now realizes that Jax must have gone to the bathroom to take them. He is worried why he didn’t ask for them, but decides to ask him later.

Bren walks back towards the bedroom to see if Jax needs help collecting his stuff. Jax was standing in the door, his bag slung over his shoulder and holding his charger and phone in his hand.

Jax looks cold and distant as he says, “I'm ready to go.” 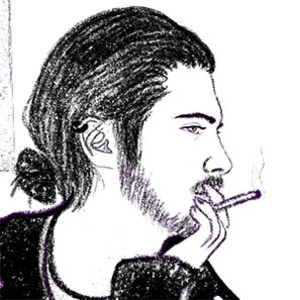