The snow didn’t have much build-up in the alleyways thanks to the narrowness of the walls, traversing here will be much easier. I enter one of the alley openings and continue into the unknown. I say that because of how unpredictable these alleyways can get, they’re the hidden mazes of this city. It doesn’t help that all of them look too similar to each other. You could say that they are our modern day dungeons, crime happens in these parts too often so it only proves my point.

I remember alleyways being a through-and-through thing, like a tube to the other side. What happened to that?

Now’s not the time. I still have my task at hand.

Ignoring the other way out, I delve deeper into the darkness and mystery of this ‘dungeon’, hoping I can see this thing through. As I course deeper within the maze, the number of branches of alleyways drastically increase after each turn, like I’m in some optical illusion of sorts. Never thought I’d be using my brain this much outside of school, especially in an alleyway.

I make numerous twists and turns and as I do, the snow begins to silence ever so suddenly. It just… stopped…? Like that? No, no… Something’s bothering me about this situation… It just seems very- abnormal to me.

I keep digging and eventually I catch myself in complete darkness, a dead end, with no lights or anything with signs of civilization inside it. Not even graffiti or street art… what is this place? With no other decision, I take a complete u-turn and find my way out from there. But as I do so, I hear a sound that did not come from me… a separate foot that just planted in the snow. I hear it again shortly after, a soft crunch and squeak as if the source is trying to be as stealthy as possible. It’s the dead of night and I’m in an alleyway, which can only mean one thing… *sigh*… I’m not dying here…

I reposition my hand so that I am grabbing the hilt of the sword, that way I can execute a quick slash without them having any time to react. If that person or people can see me then they should know that I am ready to strike at any moment, the only problem for me is where am I supposed to swing? I’m aiming to defend myself, not downright kill them. I may appear and act like an asshole at times but at least I have standards.

I hold steadfast, waiting for an opportunity. However, I find my expectations being diverted away as I hear the swift unsheathing of a blade and sizzling from the source. From the dark, two red luminescent bulbs begin to glow as it catches me off guard. The bulbs act swiftly and just before I know it, it pounces, revealing itself to me. The red eyes reflect off the sheath of my blade, its metallic surface and skinny frame is all I needed to see to identify my foe, A V-Unit. I thought these things weren’t supposed to come into fruition yet, and also aren’t these things supposed to be for war-use and whatnot? Ugh… There I go with the questions again… Now’s not the time, my life’s on the line here.

I lean back, fall and roll backwards to avoid the attempted assassination. The V-Unit manages to pounce over me and recover from its fall by using its knee to slide towards the end of the wall despite the snow. I know very little about friction to argue about its action there.

I quickly switch up my attitude and play it off.

“Heh, you’re in the wrong line of work, Buddy. Y’know, you can just tell me to go back home instead of just trying to kill me.” I quip.

The Unit stares at me still with those bulbs, remaining in the kneeling position from its slide.

“Not much of a talker, eh? I can relate. I didn’t really talk much when I was younger either. Knowing you Units and all, you guys are like- what? Three- Four months old? I’m pretty much talking to toddlers right now, aren’t I…”

The Unit stands itself up from its position.

“Oh? Got something to say?” I switch up my attitude again, this time getting a bit more serious.

It speaks with a terrorizing demeanor, “We V-Units are protectors of the people. We were designed to take action to those who break our laws. Our creator, Vorutuno, designed us to be this way.”

“So… minors who are out after curfew? That’s breaking a law?” I retaliate.

“You… are more than just a ‘minor’.” The V-Unit says as it repositions itself for another attack.

I forcefully throw away the holster of my blade and get into a stance.

“Maybe so… either way, it’s fight or flight in this situation, and I now know flight is not an option for me anymore.” I say.

Come on grunt. Show me what you can do!

Hello! It's been a while!
My schedule is becoming more and more erratic so sorry about that.
Nevertheless, I'm doing my best to entertain you all so here's another part and the end of Chapter 4.

As always, I hope you all are doing okay! 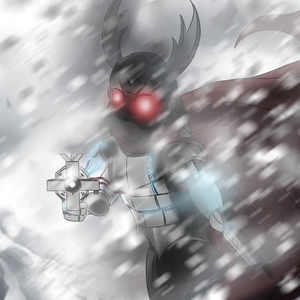