The sight of the falcon must be majestic, the way it floated through the sky and watched the lands under it. What sights had it seen already? Human settlements? Wars and peaceful co-existence? Everything was possible, if it was in reach of his wings and stretched within his horizon. Even if a falcon could have already seen everything in its life, this picture was something new, even surprisingly unfamiliar. As if through magic, the falcon fell into a trance and its fast flight turned to a kid of poise. Fog drifted under it, slowly clearing up. First, it saw the snow clad tips of single mountains piercing the fog. Then, the green of the forest, that had taken over almost the whole area, shone through. Only a small clearing was visible, seemingly not having grown naturally. The dissipating wisps of fog confirmed the picture as wooden cottages with straw roofs slowly came into view. It was a human village, built in the depths of isolation. What had driven the humans here? What sense did it make to be so far from civilization? Was there a secret here? The thoughts of the falcon must have been similar to his as it glided through the air. It would never know, because its journey would soon carry it further. But we will not travel with him. No, we will examine this place a little closer.

Is it worth it? We do not know yet, but isn’t it exciting, not knowing exactly what is waiting for us?

All the houses of the village appeared very well maintained: The roofs had been replaced recently and maybe that was why one house stood out from the rest. It stood at the edge of the village and, while most of the houses were about two metres apart from each other, this one was at least five times as far. The roof was broken. It would let in the water during the next rainfall and flood everything. The lawn in front of the house did not leave room for assuming that the owner put much effort into the impression made on others. What would it look like inside? As luck would have it, a young girl, not older than seventeen moons, walked towards the house with determination. She wore a long, blue dress of silk with the finest embroidery. Had it been white, it could have been worn to a wedding. Was a celebration imminent? If one took their gaze off the dress and examined the girl closely, one could see she had other striking traits. She had long blonde hair that reached to her mid-back and green eyes, making her fit in perfectly among the other villagers. All the others had blonde hair and green eyes, too. A hint that this was a closed community which traced its origin back to one life. To accentuate the picture, she wore a neckerchief as a kind of headband. It was self made, probably with the batik technique since the colours seamlessly went from deep pink to sunset orange and repeated at different, random points. She stepped towards the door, but did not knock. Was it her house? That would contrast the way she kept herself. Time will show us.

Are you looking for more stories that you might like? Then I recommend "The Assassins captive", a 18th century gay comedy and romance [+18 only]

Magnus has been kidnapped by an attractive assassin and honestly, things could be worse. His kidnapper, Klaus, is deceptively intimidating. Klaus wears all black and vest full of knives but all he really wants is an excuse to eat chocolate cake for lunch and day-drink on the patio. As the overlooked youngest son of an ultra-rich colonial family, Magnus is just happy to have made a friend. Can Magnus and Klaus ever go back to their lives before the kidnapping? 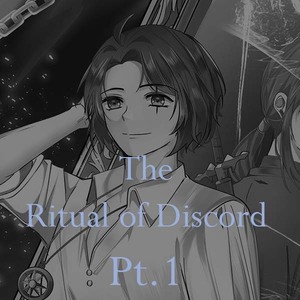