She entered with determinedly fixed gaze. The girl did not look left nor right. She did not seem to be looking for anything, but her eyes told that she wanted to find something, or rather someone? The room was sparsely furnished, although it would almost enhance the image. In the hall stood only a broom, already past its prime, and all other doors seemed blocked up as if they weren’t needed. Only one more room, which was not locked by a door, was on her way. What would she find there? An older man, who spent the evening of his life in the house of his ancestors and whom the girl cared for? A stable, in which maybe pigs were held after all and the house had thus changed its original purpose? No, for the first option, the house was too empty and for the second one definitely too quiet. It had to be something else.

Hastily, the girl entered the neighbouring room, which again was scarcely furnished. In here were simply a bed and an old jug, which was apparently used to catch the rain. She could hear snoring from the bed and, after taking a closer look, a young man lay in it. He, or rather what he did, seemed to displease the girl as her face turned into an angry grimace. Without trying to wake him gently first, she grabbed the jug from the floor and threw the cold water at him. He startled. “Huh?! Okay! I’m awake, I’m awake,” he yelled, with an undertone that promised certainty over the fact that he was quite used to this sort of torture. The girl raised her voice and her anger did not fade. “Damn it, Ira! You can’t keep sleeping until late afternoon. Especially today. Today is our big day. The ritual is today.” Unimpressed, Ira sat up and offered the opportunity to scruitinise him. He was different from what was known by now. Apart from his stately stature, his hair caught our attention. It was of a bright reddish tint, almost orange, like the evening sky in autumn. His eye colour was unusual, too. They were brown. Of course, anywhere else in the world that would have been irrelevant, but in this village where everyone had blonde hair and green eyes?

“Come on, Ira! We have to go! If we’re too late for the ritual of discord, we won’t get to participate. And I don’t want to fail, do you?” asked the upset girl and pulled on his arm. “And how is that supposed to help, Mireska? Nobody in the village wants me to participate.” “But that’s exactly what could change with the ritual. If you pass, you get to practise a profession and choose a beautiful wife.” Mireska hesitated and quickly added: “Manly stuff. But don’t you go thinking I would be interested.”

Ira stretched and smiled. “Don’t worry, Mireska. You talked of beautiful women, right?” “Ugh, Ira!” burst out of her, followed by a movement of her hand, a deafening smack and Ira’s equally numb cheek. He would not stand for it. “Ow. Just you wait!” He pulled on Mireska’s arm and threw down beside him onto the bed. It could have been almost romantic, but the bed was still cold and damp from the successful wakeup call. Instead of a romantic scene, which would have found its eternal resting place in the chronicles, Mireska’s squeak echoed through the room, followed by the joint laughter of youth. 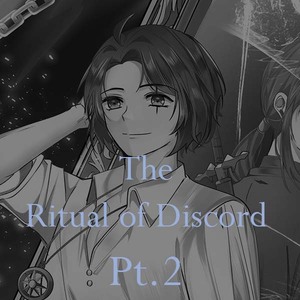